A California gun owner and purported “supporter” of Second Amendment rights smashed his AR-15 to pieces with a sledgehammer as a symbolic protest against the recent mass shootings that have occurred around the country.

Chad Vachter of Riverside County told local NBC affiliate KMIR he first got into guns when his father took him hunting as a child. He’s been a 2A defender ever since. But that all began to change after the 2015 San Bernardino terror attack at the Inland Regional Center. As it turns out, that’s where his son went to receive treatment for autism.

“So when my son is old enough to realize that someone went in there and shot up that place, and he see’s that gun in my possession and asks me, ‘Why do you have that, Daddy?’ I don’t have a good answer,” Vachter said.

Vachter’s doubts mounted after the Las Vegas shooting, which killed 58, and the church shooting in Sutherland Springs, Texas, which killed 26, but the last straw for Vachter was the shooting last Tuesday in Northern California in which a gunman shot and killed five people and injured at least a dozen at multiple locations around Tehama County, including an elementary school.

“I can’t do it. I can’t have something in my house that so easily could become another part of a situation like that, and I’m not going to be desensitized to it. I refuse it,” Vachter said.

So Vachter decided to smash up his prized AR-15, an action which was filmed by KMIR. After doing the deed, Vachter said he felt relieved.

“It makes me feel like I’ve been a small man to think that I needed one of these,” Vachter said. “The other night, when I read the thing about the school in Northern California, I cried and I haven’t felt good since, and although I’m still sad for all the people and all the victims affected, I feel like I’ve done the only thing that I can do in this equation.”

Despite taking a sledgehammer to his AR, Vachter says he’s still a Second Amendment supporter, and he’s still keeping his pistol and shotgun. But he’s issuing a challenge—via Facebook—to other gun owners to destroy their “assault weapons” and use the hashtag #NotWithThisGun. 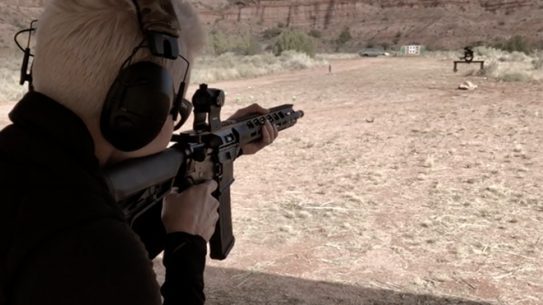 Ruger's AR-556 MPR 'Multi-Purpose Rifle' is easily customizable and performs like a champ out...