A home intruder in Littleton, Colo., earned himself a trip to the morgue after breaking into the home of an off-duty police officer last Friday.

KUSA says Denver Police officer Phillip Donovan, 33, was asleep in his basement at his home in the 6200 block of South Spotswood Street when he was awoken by suspicious noises coming from the floor above him. He grabbed his gun, went to investigate and ended up encountering a man in the basement stairwell. Donovan opened fire, shooting the man once in the chest.

Police arrived at the scene and the intruder was transported to an area hospital, where he later died from his gunshot wound. He has been identified as 53-year-old Kerry Dean Hughes.

ABC affiliate KMGH says word began to spread around the neighborhood about the possibility of a second suspect, but Littleton police determined there was nobody else involved and thus the community was safe.

Hughes has a lengthy rap sheet in Littleton, Jefferson County, Douglas County and Black Hawk, KUSA said. He has prior arrests for drug possession, identity theft and burglary stretching all the way back to 2001. In 2009, he was convicted on burglary charges and sentenced to 10 years in prison for a another break-in in Littleton in 2008. He was paroled in 2016.

The investigation into the shooting is ongoing, but based on the facts surrounding the case, it doesn’t appear likely Donovan—who has been with the Denver Police Department since 2006—will face any charges.

“From the looks of it, this was a classic case of the ‘Make My Day’ law,” said Littleton Police Chief Doug Stephens, in reference to the “Make My Day” law which allows homeowners to use deadly force if they feel their life—or the life of anybody else in the house—is in danger. 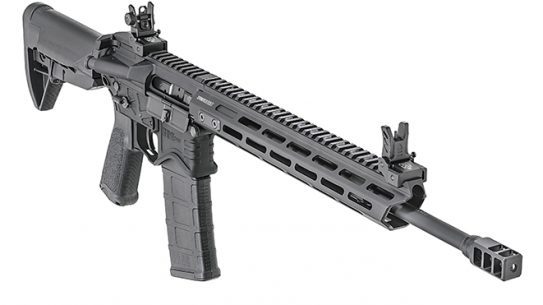 Springfield Armory has expanded its Saint lineup once again with the Saint Edge, which...