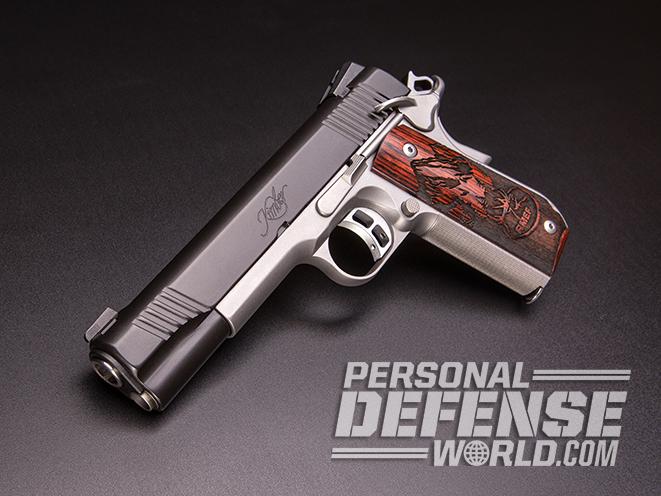 1 of 11
Photo by Straight 8
Kimber Camp Guard 10
“After spending so much quality time with this gun, my technical and empirical evaluation can be summed up in three words: I want one.” 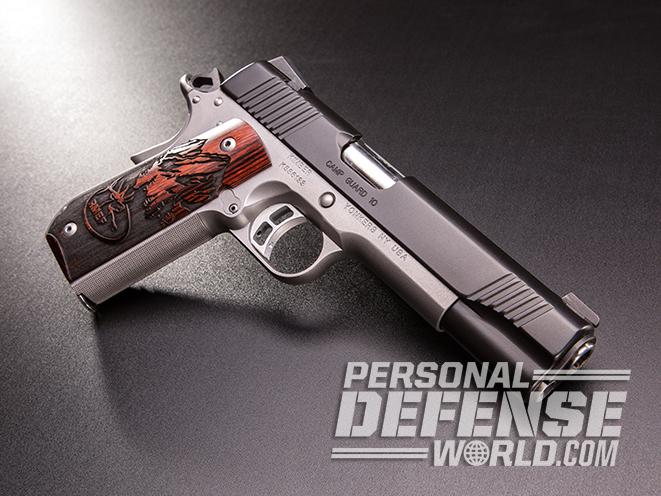 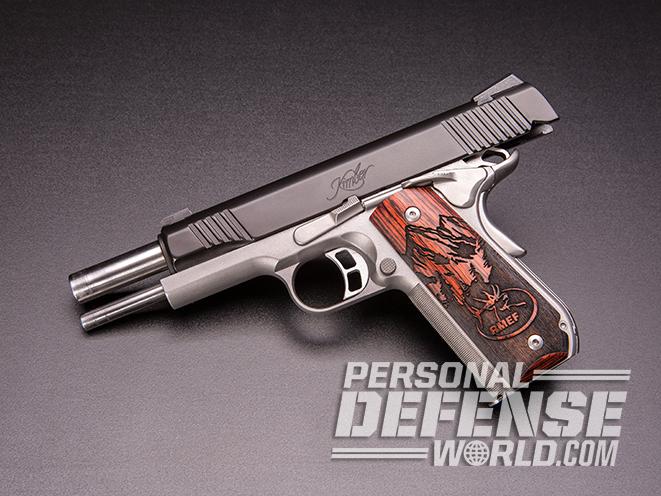 3 of 11
Photo by Straight 8
Kimber Camp Guard 10
“Together, Kimber and RMEF designed the Camp Guard for backcountry defense, and a portion of all sales goes to conservation efforts.” 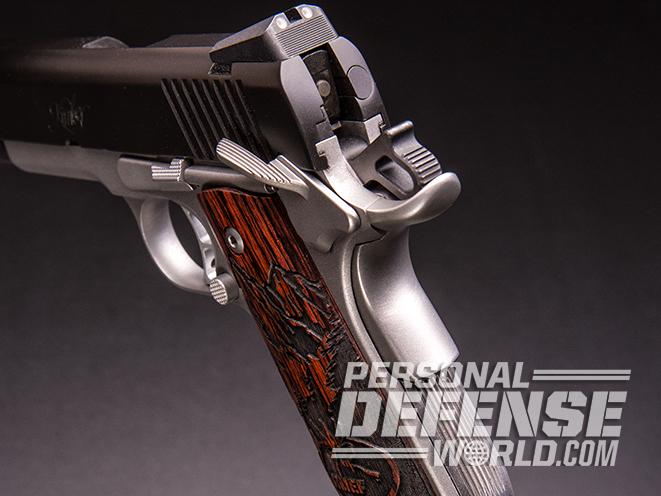 4 of 11
Photo by Straight 8
Kimber Camp Guard 10 4
Along with the pistol’s handsome laser-etched rosewood grips, note the attention to detail given to the beautifully blended beavertail grip safety. 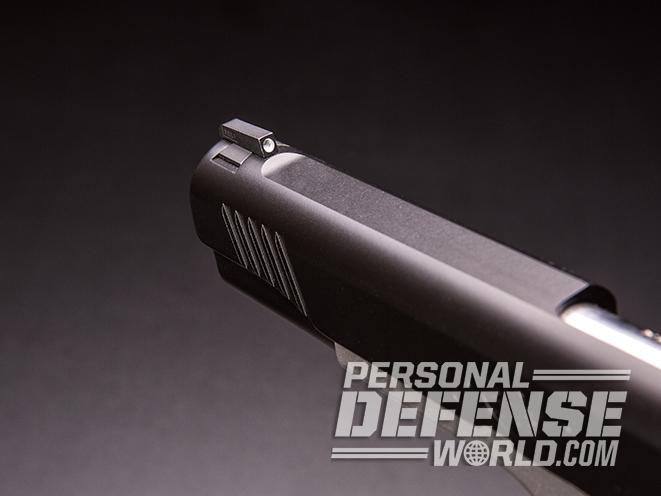 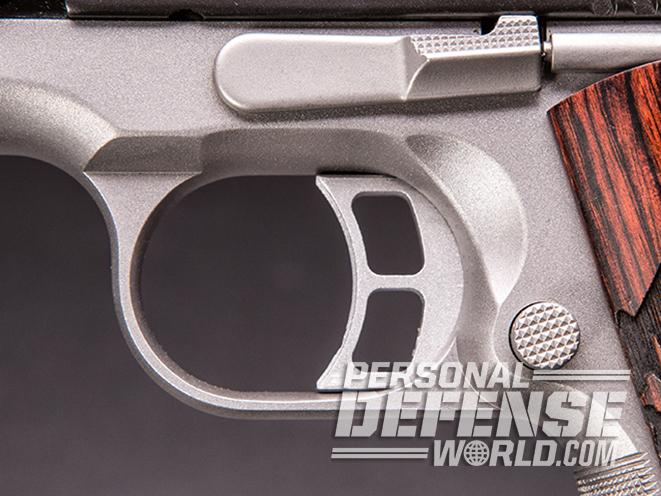 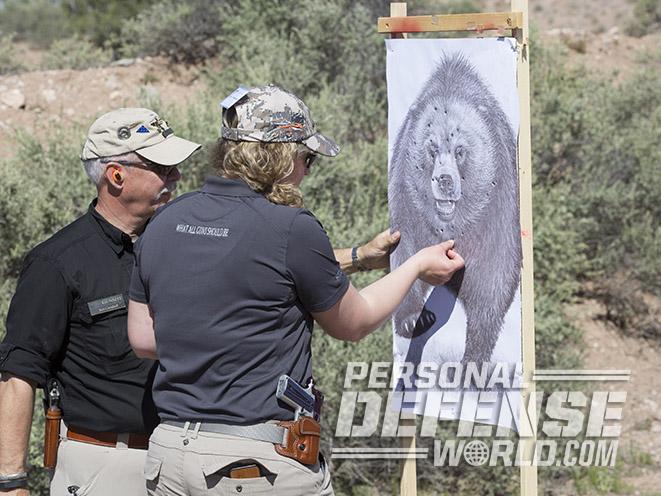 7 of 11
Photo by Fred Mastison
Kimber Camp Guard 10
In testing, the Camp Guard 10 was very accurate and easy to handle on typical square-range targets as well as one of Gunsite’s remote-controlled “charging bears.” 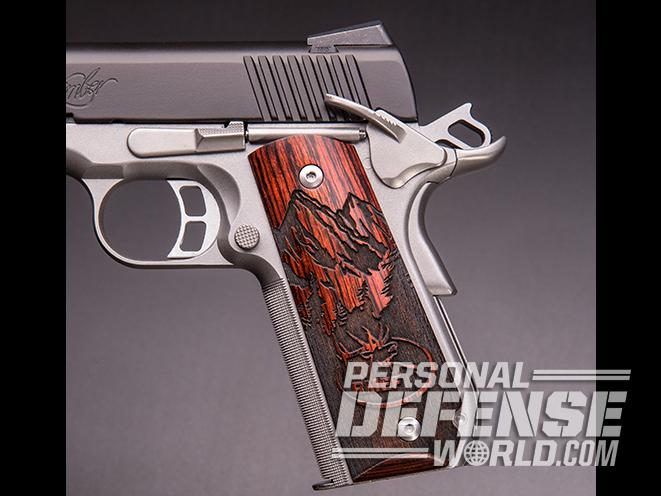 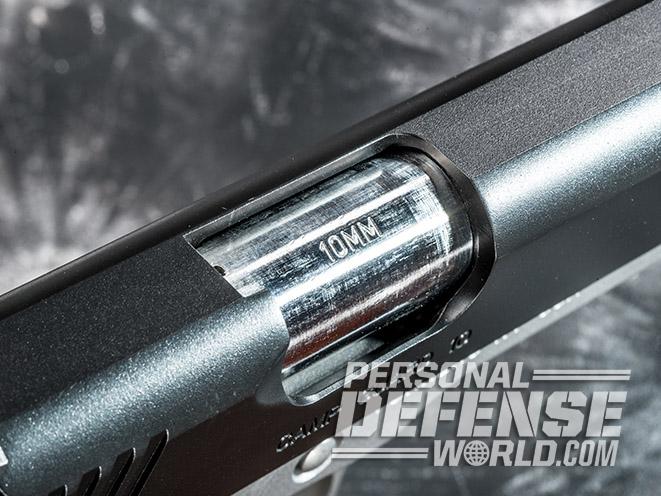 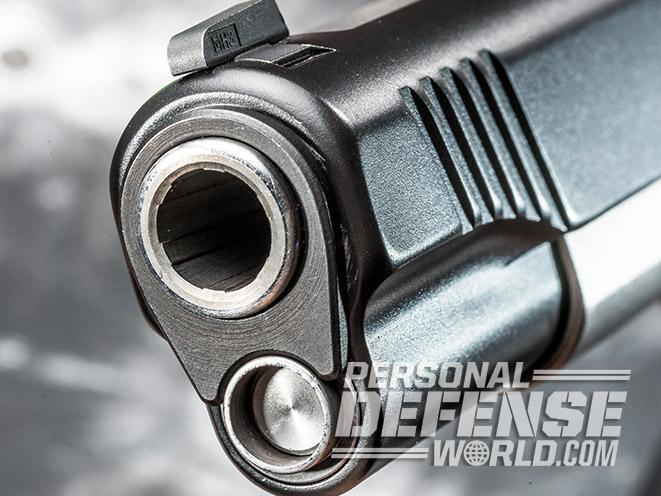 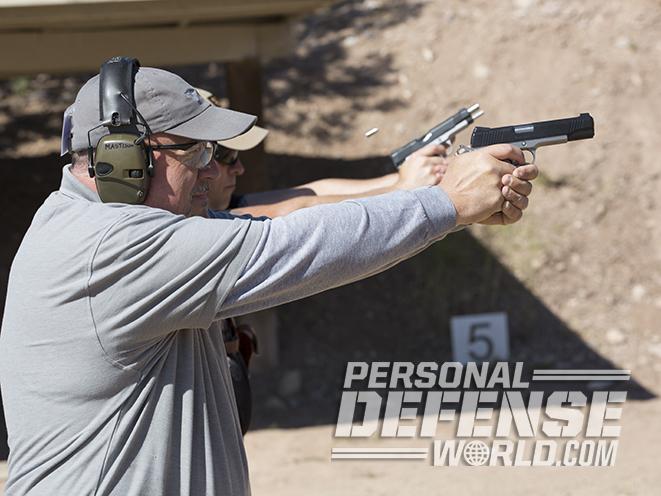 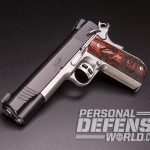 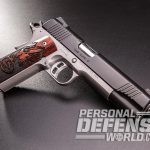 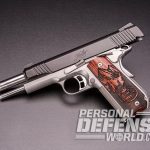 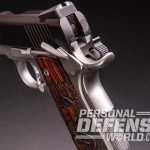 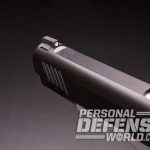 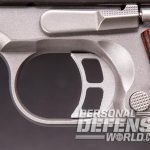 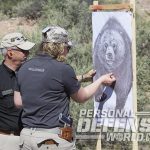 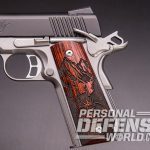 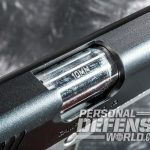 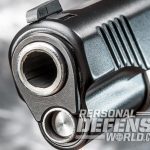 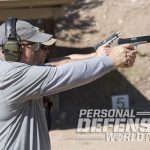 Anyone who spends time in the real backcountry knows that it can be a dangerous proposition. Not only are you detached from the security and comfort of society, but you are also now firmly implanted into an ecosystem where you are no longer at the top of the food chain. There are creatures that outweigh you by 300 pounds, run more than 25 miles per hour and have teeth as long as your fingers. While not generally aggressive, these animals do not take kindly to being surprised on a trail. They’ll always go for an easy meal.

This is why experienced hikers and campers tend to carry a ballistic equalizer of some sort in their gear as they head out into the wilderness. In some cases, it’s a rifle, but more often than not, it’s a reliable pistol. The challenge has always been to find a carry gun with enough power to deter a charging animal. While the 9mm round has gained a newfound respect for its ability to stop or slow human predators, it is woefully underpowered for something like a bear. Even the beloved .45 ACP, with its mythical stopping power, is not going to have any serious effect on a 500-pound collection of teeth and claws.

The round that seems to have the best balance of power and “shootability” is the 10mm. It’s not a new round by any means, yet few companies build guns for it. That changed recently when a group of people from the Rocky Mountain Elk Foundation (RMEF) and Kimber got together one evening. One of the questions that came up was “What would be your perfect backcountry gun?” From that conversation came the Kimber Camp Guard 10.

Born To Be Wild

The Kimber Camp Guard 10 is a 10mm pistol built on the familiar 1911 platform. The manual of arms for the 1911 is very familiar and engrained in the shooting community. It is an easy-to-run system and is well known for its accuracy. Mix into that the 10mm round and you have a real winner. The 10mm offers fantastic penetration and has been used on some of the toughest game on earth. Serious loads can push a 180-grain bullet close to 1,300 fps. That is serious power.

Add into this formula Kimber’s attention to detail. One you do that,  you end up with a gun that is as beautiful as it is effective and reliable. Every component of this gun has an intended backcountry use. Stainless steel makes up the slide, frame, barrel and other exposed parts. The goal here is to prevent corrosion. Part of being in the backwoods is dealing with harsh weather, and nothing will destroy a gun like wet conditions. To add even more protection, the slide and barrel bushing feature a black KimPro II finish. This not only looks good, but it helps the gun withstand a variety of conditions.

Comfortable carry is also a chief feature of the gun. For those who may carry a few hours during the day, attention to some of the finer design details may never come to mind. But if you have to carry a gun while you are humping through rough terrain for an extended period of time, it’ll begin to matter a whole lot. You will find every sharp edge and harsh angle on that gun during your protracted time with it.

So, Kimber has gone out of its way to make this gun quite a pleasure to carry. The company has bobbed the frame and rounded the heel. The gun is still easy to run, however, and not so smooth that maintaining your grip becomes an issue. The grip frame’s frontstrap has 30-lpi checkering. Then there’s the serrated mainspring housing, which allows you to get and maintain a good grip while firing.

Some of the other solid design features include a beavertail grip safety, a skeletonized hammer and trigger, a full-length guide rod, snag-free tritium sights, front cocking serrations and an extended thumb safety. An aesthetic feature that I did not realize I would like so much is the flat milling of the top of the slide between the sights. This is a very unique feature that adds to the gun’s looks.

While the gun’s black and silver colors are striking, it is the carved rosewood grips that will really catch your eye. These grips are also a reminder of the partnership that Kimber made with the RMEF in regard to this gun, as the RMEF logo is laser-etched into the beautiful grips, making them as much a piece of art as they are functional. The RMEF’s mission is to ensure the future of elk and other wildlife along with our hunting heritage. Together, Kimber and RMEF designed the Camp Guard for backcountry defense, and a portion of all sales goes to conservation efforts.

Now I feel compelled to add a little insight and observation regarding the Kimber Camp Guard. Is it a fantastic option for defending against dangerous animals in the backcountry? Absolutely! There is zero doubt in my mind that this gun will shoot, in the immortal words of one of my favorite people from Kimber, “MOB” or “minute of bear.”

But what I also see is a gun capable of stopping two-legged predators as well. The 10mm was the FBI’s round of choice for a time for good reason. It has a devastating effect on soft tissue, and bad guys rarely walk away after taking a hit with these rounds. The challenge for the FBI was finding a gun that could harness this beast of a round without punishing shooters. They ultimately failed, and the 10mm became the .40 S&W round. I would put forth the thought that if the Camp Guard had been in existence at that time, the 10mm might still be the round of choice for the bureau.

I had the rare opportunity to run the Kimber Camp Guard in both a defensive handgun training setting as well as a dangerous-game training setting. First, I ran the pistol through Gunsite’s well-respected 250 Pistol class test. This was a series of stages ranging from fast close-quarters shooting on turning targets to shooting from prone at 25 yards. My results with the Camp Guard spoke volumes, as I finished the test with a score of 100 percent.

While I would like to credit my masterful ninja-like shooting skills, the pistol was a major part of the equation. It was a pleasure to shoot, and it had fantastic accuracy potential. The trigger on the gun broke smoothly in the 4- to 5-pound range and was smooth with a short reset. The gun also weighs only 38 ounces unloaded, which is 2 ounces less than my favorite personal 1911. The Camp Guard’s 18.5-pound recoil spring also helped manage the 10mm recoil quite nicely. For those expecting a hand cannon, expect a pleasant surprise.

Once I completed my time on the turning target range, I headed over to the dangerous-game section. This was Gunsite at its finest. The staff had set up a shooting bay with a remote-controlled target system. Gunsite Chief Operations Officer Ken Campbell remotely ran a large bear target at the shooter to simulate a charge. The goal, of course, was to put 10mm rounds on target while it quickly closed the gap on you. It was more challenging than I thought it would be, but the Kimber Camp Guard ran just as well in this section as it did the defensive handgun section. I was easily able to put rounds into the head and more specifically the eye area of the “charging bear.”

The thought of shooting a ragged-hole-type group into a moving target like this is pure fantasy. But in reality, I was able to create a fist-sized group on the target with ammunition that has the power to penetrate even an angry bear. The ammo I used for all of the testing was Hornady’s 175-grain Critical Duty FlexLock load. This was fantastic ammunition that seemed to fit the reliable Kimber Camp Guard perfectly.

After spending so much quality time with this gun, here is my technical and empirical evaluation: I want one. The gun ran like a champ with no malfunctions or hiccups of any kind. I am a fan of the 1911 platform. I believe that its merging with the 10mm round is a match made in heaven.

The Camp Guard is a great gun on many levels. First is the cooperative design effort with the Rocky Mountain Elk Foundation and Kimber’s commitment to support the RMEF with part of the sales. Second, and most importantly in my mind, is the birth of a solid 1911 that pumps out a round capable of stopping fights in many species. Whether you are a dedicated outdoorsman or someone looking for a serious defensive handgun, the Kimber Camp Guard is it.

This article is from the November/December 2017 issue of  “Combat Handguns” magazine. To order a copy and subscribe, visit outdoorgroupstore.com. 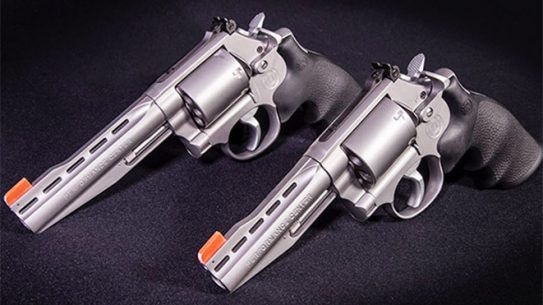