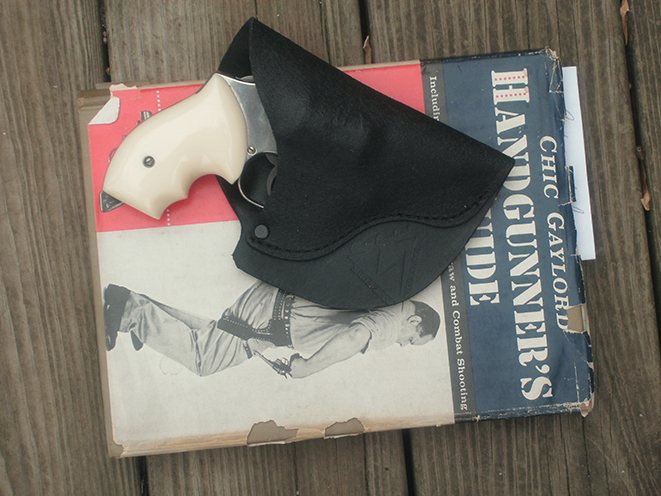 1 of 7
Gaylord’s 8-Ball
For a closer look at pocket holsters, let’s start with the original Gaylord 8-Ball. It’s a simple, traditional-style, open-top pouch holster constructed of rough-side-out, top-grade cowhide. This places the smooth side of the leather against the gun to minimize wear on the finish, while the rough outer surface clings to the pocket to stabilize the holster. The trailing edge extends the full width of the pocket, which also helps keep it in place. The triggerguard is fully enclosed, as is the hammer spur. The pouch is wet-molded for a perfect fit for the revolver, in this case my 2-inch-barreled Smith & Wesson J-Frame. The original Gaylord 8-Ball still represents the benchmark for pocket holsters. 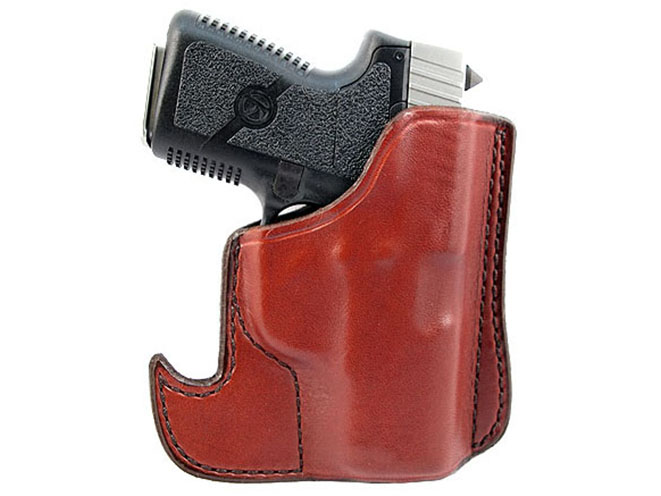 2 of 7
Don Hume Model 001
Before most law enforcement agencies switched from revolvers to semi-autos, the duty holster of choice was designed by Border Patrol Officer Bill Jordan. Don Hume Leathergoods was the only authorized maker of the official Jordan holster, so many peace officers carried their duty revolvers in Don Hume leather. The company also produces a pocket holster, the Model 001 Front Pocket Ambidextrous holster. This Hume holster is noticeably different from the others, as it is producewd from two pieces of smooth-side-out, premium cowhide with an attractive red brown finish. The open-top pouch is wet-molded for a perfect fit, keeping the triggerguard fully enclosed and the hammer spur exposed. The Model 001’s stitching is perfect, and the edges are neatly creased. For full ambidextrous use, the front and back sides are identical. The bottom rear edge has a pronounced hook that will catch on the top-rear edge of the pocket as the gun is drawn, pulling the holster free of the revolver. 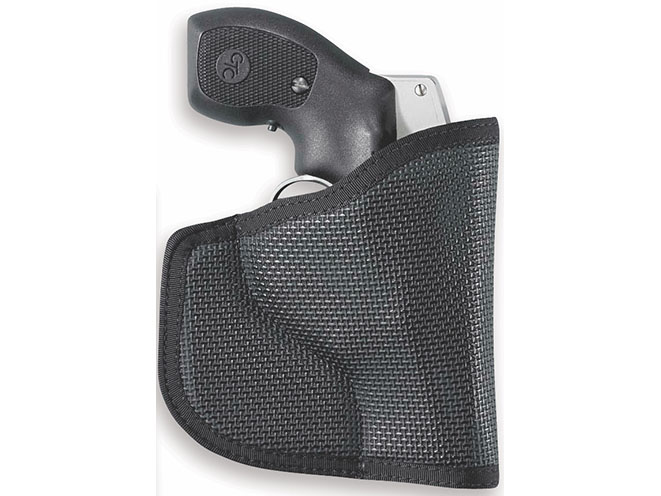 3 of 7
DeSantis Nemesis
The Nemesis is a soft synthetic pocket holster for small revolvers and semi-autos. While my sample is marked for S&W J-Frame revolvers, my vintage Colt Detective Special fits in the holster perfectly. The Nemesis is similar to the original Gaylord 8-Ball holster in size and shape. But instead of leather, it is constructed of a three-part synthetic sandwich consisting of a smooth pack cloth lining, a foam center and a viscous synthetic exterior. This sticky outer surface ensures the holster will remain in place when the handgun is drawn. The front and back sides are mirror images of each other, so the Nemesis will work equally well in either side pocket. All of the edges are bound and double stitched to and prevent fraying. The DeSantis Nemesis is a state-of-the-art means of concealment. 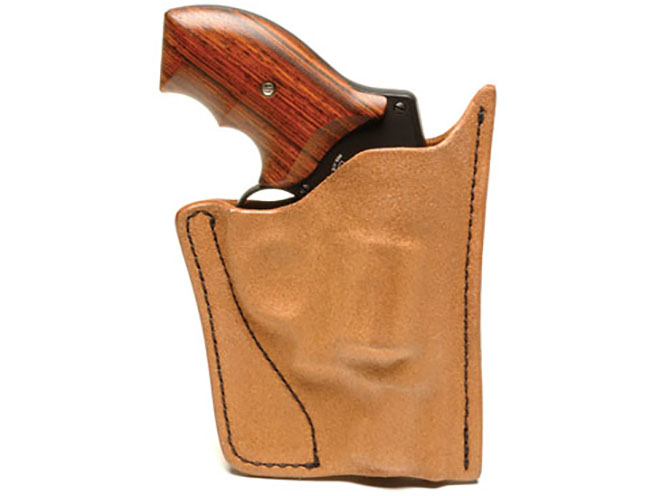 4 of 7
Dillon Precision El Raton-DL
Made for Dillon Precision by Mitch Rosen, the El Raton-DL pocket holster is designed specifically for 2-inch-barreled Smith & Wesson J-Frame revolvers. It’s constructed of two pieces of top-grade, rough-side-out cowhide and is rectangular in shape and more compact than the Galco pocket holster. The pouch is wet-molded for a precise and secure fit, keeping the triggerguard and hammer spur fully enclosed. The pouch is securely stitched along the leading and trailing edges. The leading edge extends from the top to form a hook that the user may drag to the front corner of the pocket to snag the holster and free it from the revolver. Alternatively, it is also possible to use your thumb and the hook to push the holster off the gun. With all of the edges neatly finished, the El Raton-DL makes for an excellent example of Mitch Rosen’s work 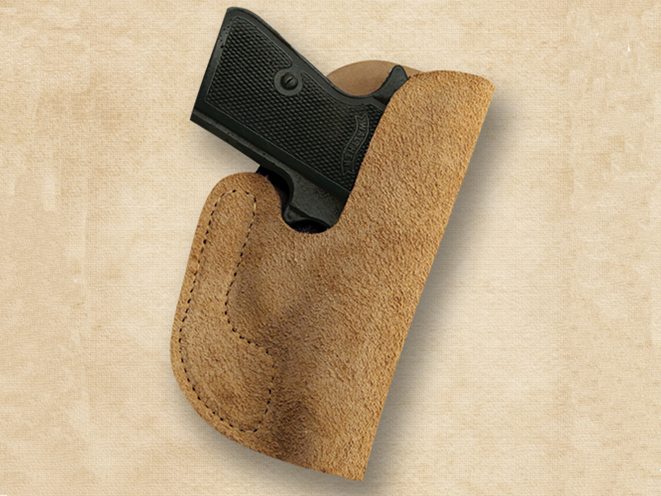 5 of 7
Frontier Gunleather Pocket Pal
Constructed of thin, rough-side-out, top-grade cowhide, the Pocket Pal is a bit more rectangular in shape than the other holsters here. Its rough-textured outer surface tends to cling to one’s pocket lining and reduces movement, and it keeps the Pocket Pal in place when the gun is drawn. The holster is cut to enclose the triggerguard and hammer spur. The backside extends above the front, so it is not ambidextrous. An unusual feature is the leather lining on the backside of the holster, which adds some rigidity to the pouch to prevent printing. While my Pocket Pal is sized for 2-inch-barreled Smith & Wesson J-Frames, my vintage Colt Detective Special easily fit in the rig. 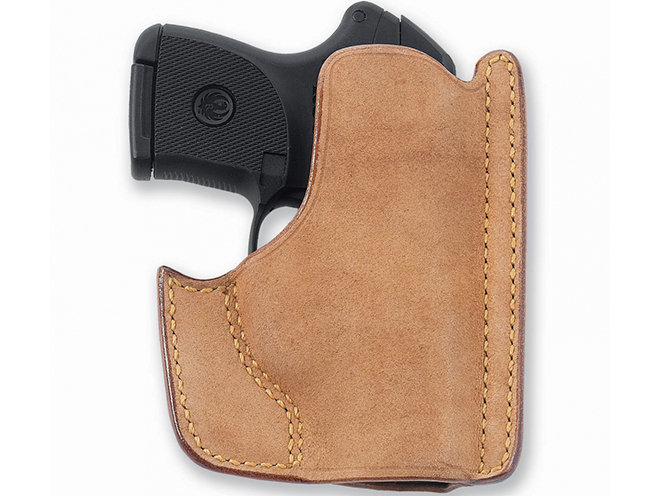 6 of 7
Galco Front Pocket
The Front Pocket Horsehide Holster is an excellent example created by Galco. Horsehide is a lightweight but dense leather that produces a moisture-resistant product. The front and back sides are identical, making it ambidextrous. As with the 8-Ball, the hide is rough-side out for adhesion. The front and back of the open-top pouch are constructed from two separate pieces of horsehide, double-stitched for long wear. The leading edge contains a stiffener to provide structural stability. The pouch is also wet-molded for a perfect fit and fully encloses the triggerguard and hammer spur. The top trailing edge forms what Galco calls a “triggerguard hook,” which will catch on the rear edge of the pocket when drawing the gun, retaining the holster. For use with spurless-hammer revolvers, the reinforced top leading edge of the holster has a “top rail hook” that may be used to catch on the front-top edge of the pocket. This is a quality rig with perfect stitching. 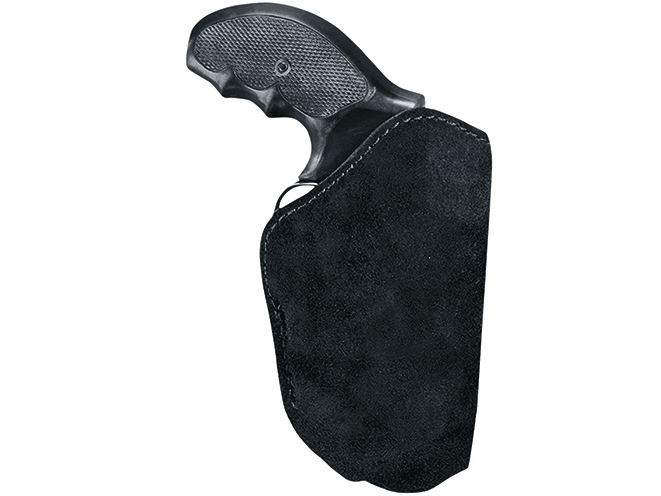 7 of 7
Safariland Model 25
The Model 25 pocket holster is made from SafariLaminate, a black synthetic suede mated to a thin Kydex lining. The Kydex is molded for the revolver on the back side only. The unfolded face of the pocket holster prevents it from printing while in the pocket, and the open-top pouch encloses all but the grip of the holstered revolver. With the molding on the backside only, it is not ambidextrous. The fit is noticeably looser than that of the other pocket holsters reviewed here, and it relies on the suede exterior to drag on the pocket as the gun is drawn. This Safariland synthetic pocket holster is very lightweight and perfectly executed. 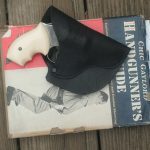 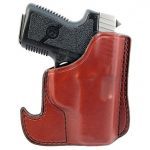 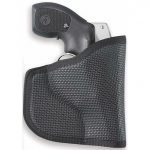 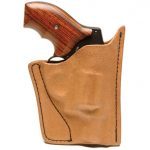 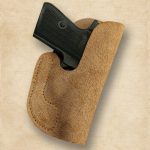 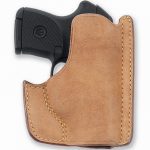 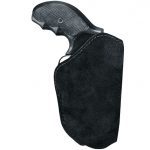 With concealed carry now legal in most states, pocket holsters are a popular means of carrying small handguns. But pocket holsters aren’t new. They date back to the late 19th and early 20th centuries, when police officers often carried their medium-framed, double-action duty revolvers in a pocket holster on the hip. In the classic “Sixguns by Keith,” Elmer Keith discusses an ex-gunfighter friend of his who carried a short-barreled Colt Single Action Army revolver in a pocket holster: “Sam could stroll along the streets of any town with his right hand in his right pants pocket and coattail covering the gun, yet in a fraction of a second his hand could slide out of the side pants pocket, grasp the gun and draw it shooting.”

But it was holster pioneer Chic Gaylord who popularized the modern pocket holster. Gaylord produced the first hand-molded, boned, friction-fit holsters in his New York City holster shop in the 1950s and 1960s. I recently purchased an 8-by-10, black-and-white press photograph dated October 9, 1955, showing a close-up of a Colt snubbie in a Gaylord “8-Ball” holster being inserted into a side pants pocket. The caption read, “The 8-Ball Side Pocket Holster for small guns is a favorite of detectives, bankers, jewelers, shopkeepers and people who want to carry a concealed weapon.”

And such people may find that the pocket holster works as well today as it did in 1955. As Chic Gaylord said in his book “Handgunner’s Guide,” “The logical pocket in which to carry a small gun is the side pants pocket. It affords both comfort and concealment when you’re standing in a casual manner with your hand in your pocket. It affords one of the fastest and sneakiest draws possible. Many a bandit intent upon sticking up a jewelry or liquor store has died with an incredulous look on his face after running up against a side-pocket job.”

For more information about the pocket holsters featured in the gallery above, please visit the following sites. 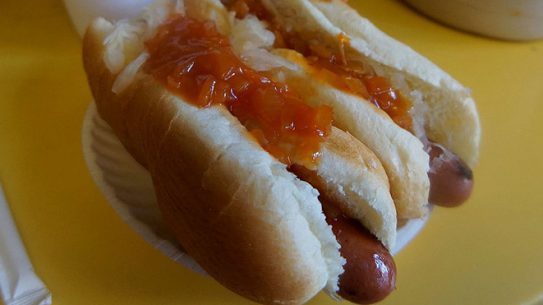 A Chicago robber accidentally shot himself in the penis when he took off after...