A would-be robber is in custody after a Raleigh store clerk attacked him with a baseball bat and held him at the scene until police arrived.

According to the News & Observer, 51-year-old William Winston III entered a Circle K gas station at around 12:30 a.m. on Tuesday morning and told the clerk working behind the counter that he had a gun. He then began demanding money and valuables.

The clerk forked over cigarettes and $70 in cash, and Winston walked out of the store. That’s when Winston soon found himself in a world of hurt as the clerk went after him in the parking lot with a baseball bat, hitting him repeatedly in the head and face. The clerk then dialed 911 and waited for the authorities to arrive.

Winston was taken into custody and transported to an area hospital for treatment. After that, he was taken from the hospital to the Wake County Detention Center, where he’s being held in lieu of $50,000 bail. He faces a charge of common law robbery rather than armed robbery. As it turns out, he didn’t have a gun on him.

Winston has a rap sheet that includes a conviction for four armed robberies, for which he did nearly five years in prison from August 2009 until April 2014. He was paroled, but his parole was revoked in November 2014 and he was sent back to prison until May 2015. At the time of his current failed robbery, he was on parole until Dec. 23 after doing time for a DWI.

The Raleigh store clerk, meanwhile, was uninjured and won’t be charged with any crime. 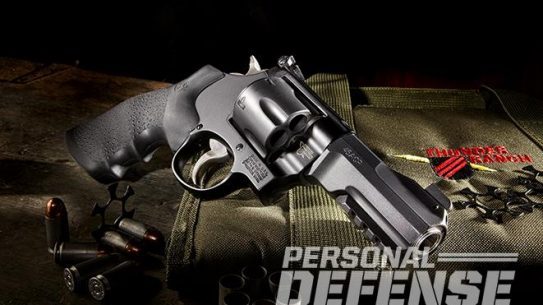 Smith & Wesson has teamed with Thunder Ranch founder Clint Smith to create one...