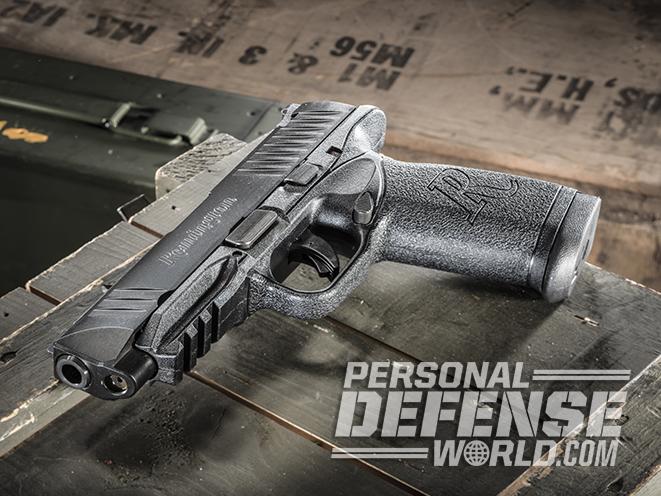 1 of 11
Photo by Yamil Sued
Remington RP9
“The RP9 was a major project for Remington, and it has been some time in the making.” 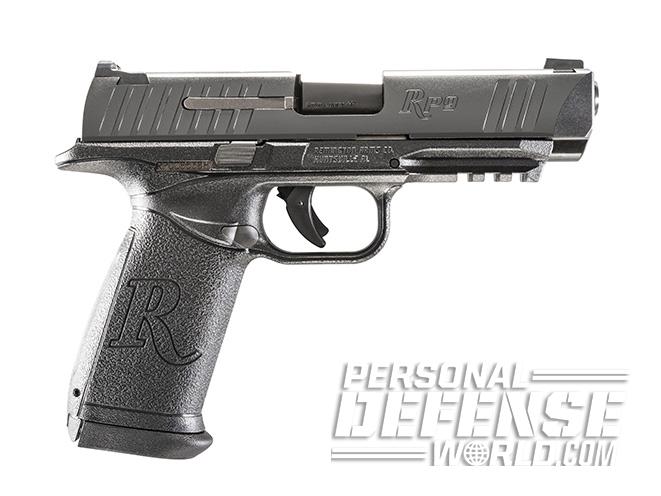 2 of 11
Photo by Yamil Sued
Remington RP9
To test the striker- fired RP9’s bona fides, the author ran over 1,000 rounds through his test sample. 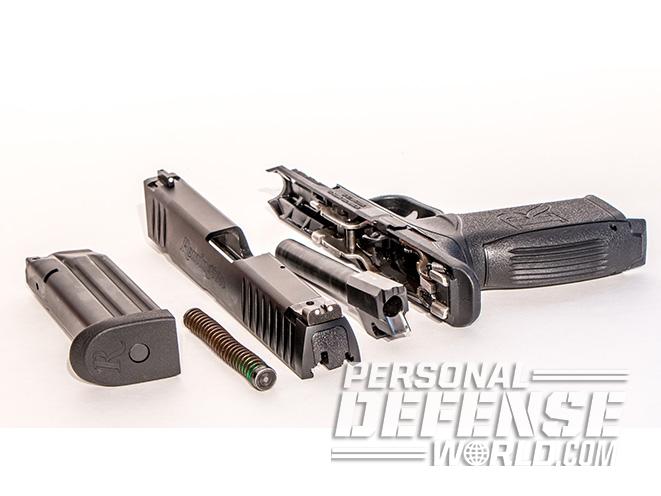 3 of 11
Photo by Richard Mann
Remington RP9
Field-stripping the RP9 is easy. Lock the slide to the rear, rotate the takedown lever, ease the slide forward, pull and hold the trigger to the rear and remove the slide. 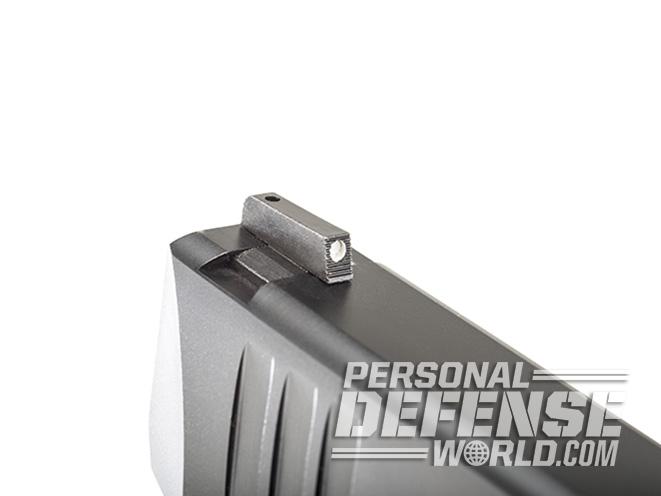 4 of 11
Photo by Yamil Sued
Remington RP9
The three-dot sights on the RP9 are high profile and quick to pick up. 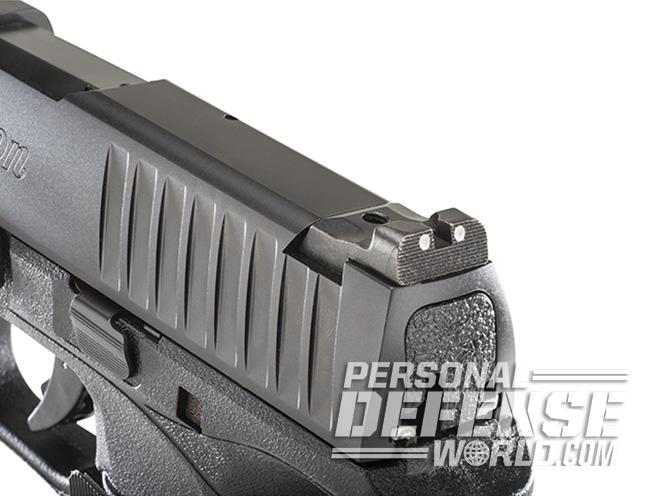 5 of 11
Photo by Yamil Sued
Remington RP9
The rear sight also features a ledge to help with one-handed slide racking. 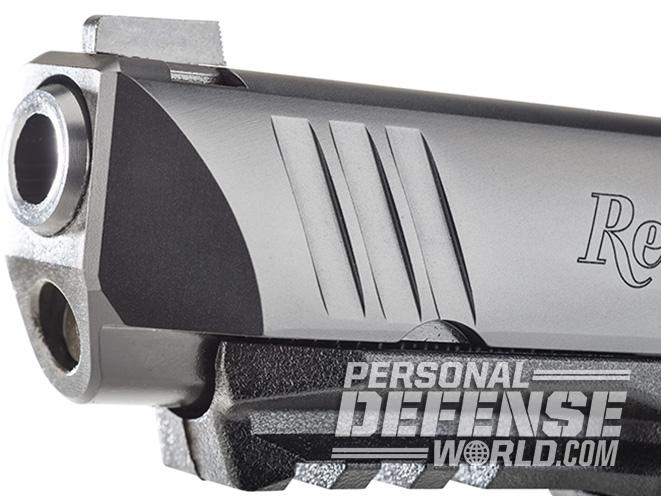 6 of 11
Photo by Yamil Sued
Remington RP9
The slide has wide serrations for easier racking, and the frame’s integral Picatinny rail can hold a number of lights and lasers for duty or home-defense use. 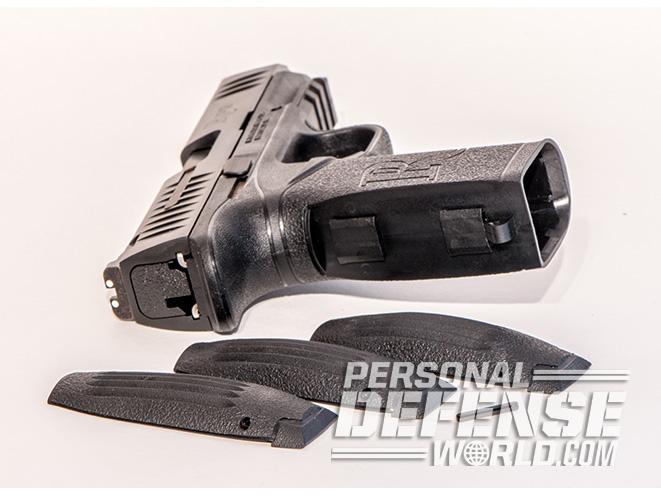 7 of 11
Photo by Richard Mann
Remington RP9
Each RP9 ships with three different interchangeable backstraps to help you find the best fit for your hands. The grip frame texturing is also very subtle. 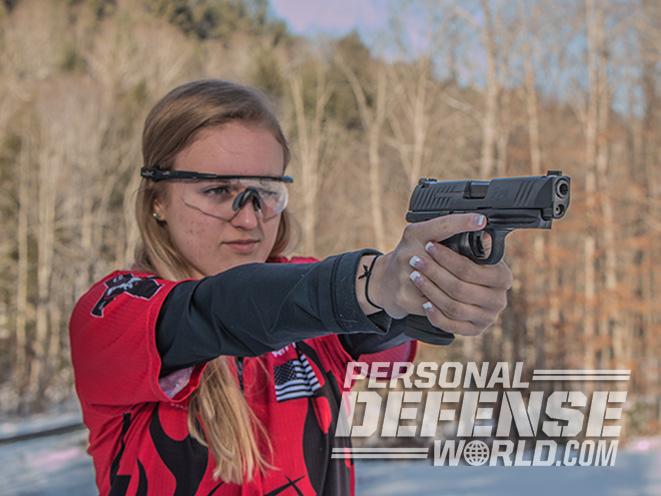 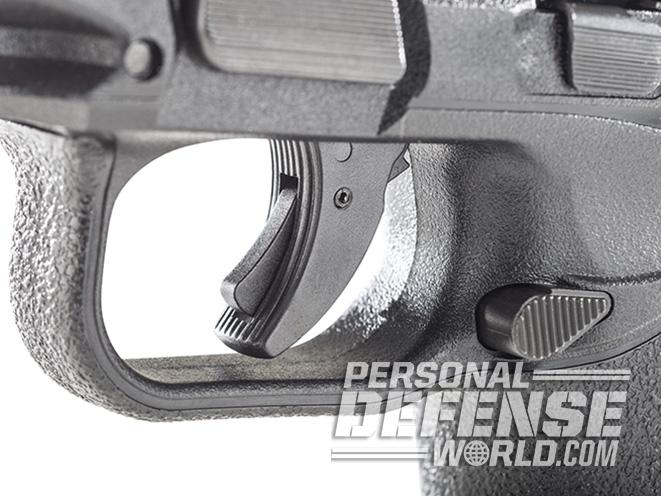 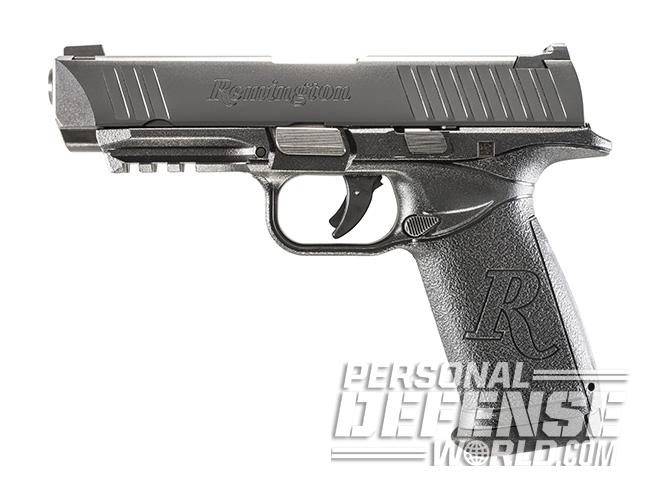 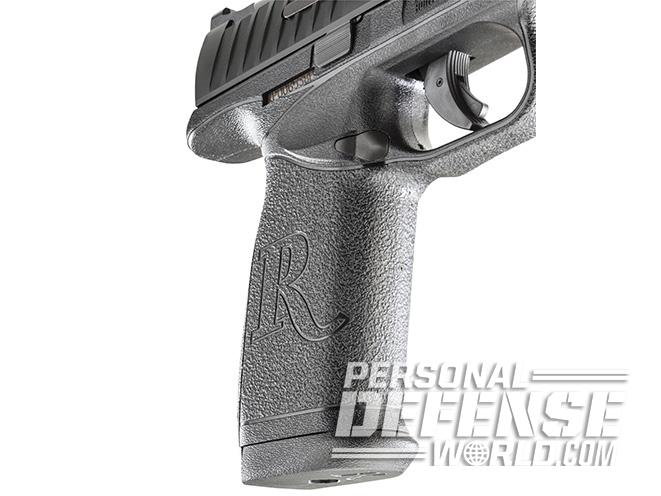 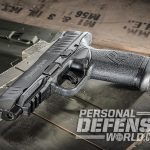 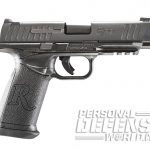 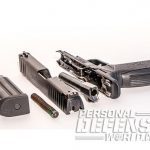 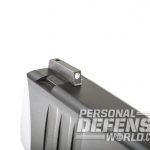 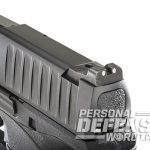 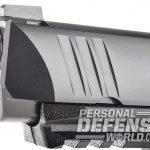 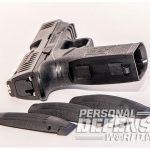 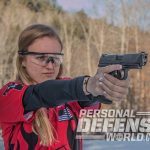 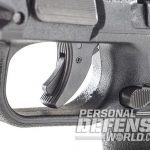 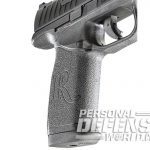 Full-sized, striker-fired, polymer-framed pistols make up the largest segment of the handgun market today. For that reason alone, it should be no surprise that Remington is finally offering a pistol to compete in that arena. Remember, in 2011 Remington jumped into pistol manufacturing with both feet when the company launched its R1 1911. This new polymer-framed pistol from Remington is called the RP9. But it’s not being built in Remington’s longtime home of Ilion, New York. Instead, the Remington RP9 is produced in the company’s new factory in Huntsville, Alabama.

The RP9 was a major project for Remington, and it has been some time in the making. I handled a prototype version of this pistol more than two years ago. I mention this to dispel any notions that Remington rushed this pistol to market. Since this was a totally new platform for Remington, the company had to start from scratch. And with a sincere dedication to not announcing it too early, Remington held off until the company had it right.

A few years ago, Remington launched and released the R51 pistol before it was ready for prime time. Remington has since been focused on improving its new product launch system. I had the opportunity to tour the new facility at Huntsville just prior to the release of the RP9 and left there inspired by what I’d seen. Not only are new protocols in place to eliminate production problems, but the attitude of everyone I encountered was to make it right or not make it at all.

These protocols include testing during the development process to ensure the design is solid and continued high-round-count testing to validate the final product. According to Glen Sietsema, the lead engineer on the RPTE9 project, “There are even more structured design validation processes, including cross-functional review of the final product, review of the internal manufacturing process and the utilization of defined supplier quality-control systems in place now at Remington.”

Sietsema added, “There is also much more communication between the Remington engineering and manufacturing teams and the business development and sales team prior to the launch of any new product. This is done to make sure Remington meets its commitments to its customers and delivers products that work when we say we will.”

I eventually left Huntsville with a renewed faith in Remington. The company is committed to respectfully carrying the mantel of the oldest gun-maker in America. And a lot of Southerners from Alabama are working to make it happen. Roll Tide!

Sietsema identified the original design goals for the Remington RP9 as follows: It had to have a polymer grip housing, be striker-fired and needed some specific advantages over the crowded field of competitive offerings. Also included in the original design parameters were a high capacity, a grip circumference to fit 95 percent of all shooters, PVD coatings on the slide and barrel, and a modular grip frame.

The new Remington RP9 complies with all of the original base criteria, but it goes even further by incorporating additional features shooters appreciate on duty-sized pistols. These include a smooth, light and crisp trigger that has a very audible and tactile reset; a precision- machined barrel for better accuracy; a Picatinny accessory rail; small, medium and large interchangeable backstraps; an optimized grip angle to help with instinctive pointing and to reduce felt recoil; a rear sight configured to help facilitate emergency one-handed slide manipulations; and a tactile loaded-chamber indicator.

Reading this laundry list of features, it might sound like someone designed the perfect fighting pistol. But I don’t believe such a thing exists. This is partly because “perfect” for one person will not be perfect for another, and partly because perfection is and should always be an unattainable goal with any endeavor. However, while some sit back in their easy chairs and turn their noses up at anything new in the firearm industry, the pursuit for perfection never stops, and with every step taken in that direction, we learn and get a little bit closer.

The real test of a fighting pistol would be to fight with it. My fighting days are behind me, and I’d prefer they stay that way. What’s left is exposing the firearms I test to practical evaluations. So, with some help from a 16-year-old girl named Brittany Long—who just so happens to be a sponsored and accomplished 3-Gun competitor—that’s what I did.

After pushing 100 rounds of Hornady’s American Gunner ammo through the pistol just to make sure it would work, I let Brittany shoot another 50 rounds to familiarize herself with the feel of the gun and the trigger. Then, I turned her loose on an MGM Steel Challenge plate rack. And let me interject something here that is a little off topic: If I could have shot as well as this 16-year-old when I was 16, I’d be famous by now. In other words, Brittany knows how to run a gun!

I’d like to say the pistol ran perfectly, and for the most part it did. We had an issue or two with seating the first round from fully loaded magazines. It was not an every-time thing, but in the course of Brittany shooting about a dozen fully loaded magazines, the top round failed to feed a couple times. I suspect that this was nothing more than the newness and stiffness of the magazines. (These magazines are a carryover from Para-Ordnance’s high-capacity 9mm pistols.) And while I cannot be 100-percent sure of this, after putting 500 rounds through the pistol, the condition has not reoccurred.

Brittany said the grip was very comfortable for her and remarked that the recoil was next to nothing. She liked the trigger, too. I agreed with her analysis on the trigger; the pull was smooth, and it’d be impossible to miss the reset. However, I had the same problem with the grip on the Remington RP9 that I do with a Glock. The knuckle on the middle finger of my shooting hand contacts the rear radius on the triggerguard. This makes the pistol uncomfortable for me to shoot. I mention this as a point of full disclosure, but for the record I’ve only found this a complaint with very few other shooters. Your hand—and your mileage—will like vary.

Though it was not the case for my smaller-handed teenage assistant, I could operate the trigger, magazine release and slide lock without altering my grip. (I’m not one who thinks the slide should be released by depressing the slide stop, but I realize this is how many shooters have been trained.)

From the benchrest, the Remington RP9 shot very well and created groups averaging less than 2 inches wide for 15 five-shot groups with three different loads. During this testing of different loads, another problem surfaced. The RP9 did not like Sig Sauer’s 115-grain FMJs. Out of the box of ammo fired, on three occasions a cartridge nose-dived into the bottom of the barrel’s integral feed ramp. On the other hand, 100 rounds of Browning’s 147-grain FMJ load and 500 rounds of Remington’s Golden Saber ammo were pushed through the RP9 without incident. In a perfect world, I would have had more of the Sig ammo to test in other handguns to see if this was an issue with the ammo or the gun.

Any way you look at it, the Remington RP9 is a big pistol. The slide measures almost 1.2 inches wide. Those looking for a dedicated concealed-carry gun might find it a tad on the bulky side. However, for shooters who like to compete in combat-style shooting matches, the RP9 holds a lot of ammo, is soft shooting and has as good a trigger as you’ll find on any polymer-framed pistol. These features, combined with its modular grip, make it an ideal first handgun or home-defense pistol for almost everyone. And it should go without saying that the RP9 fills the police duty role ideally. After all, like the rest of the human race, cops come in all shapes and sizes.

The RP9 is also very easy to disassemble. Starting with an unloaded pistol, lock the slide to the rear, rotate the takedown lever and, while holding the slide, ease it forward. Then, pull the trigger all the way to the rear, hold it there, and slip the slide off of the frame. To fully field-strip the gun, remove the captured recoil spring and barrel and you’re done. To reassemble it, install the barrel and recoil spring, slip the slide onto the frame, and rotate the takedown lever. You can take the gun down and put it back together again in less than 30 seconds with but little practice.

So, what is the final word on the Remington RP9? Well, it will also be available in .45 ACP, and some will appreciate that. When asked about .40 S&W or 10mm variants, Sietsema said, “Too early to tell. The .40 is a possibility based on customer demand. We have many design concepts, and other projects may take priority.”

I also asked him about compact models and his response was a bit more reassuring. In the end, I suspect future variations will likely be dictated by how well the full-sized pistol is received.

The Remington RP9 is a smooth shooter. You can pound round after round of +P ammo downrange without fatigue (if the knuckle on your middle finger is smaller than mine). It holds a lot of ammunition—almost a full box of self-defense rounds—and, by polymer pistol standards, the RP9 has one of the best triggers I’ve ever pulled. As Jeff Cooper said, “Those of us who shoot a good deal are well aware that the most important attribute of either rifle or pistol is trigger action.” 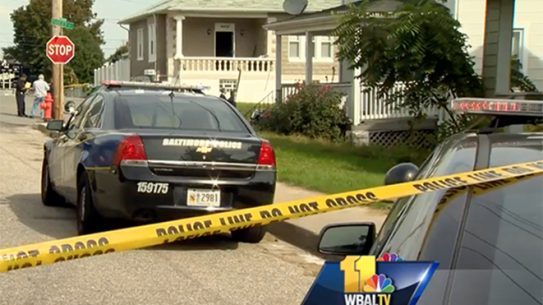 20-year-old Darius Miller Jr. was shot and killed with his own gun after trying...