There are guns that are significant because of who owned them and those that are famous in their own right. Every so often, one comes along that combines those two. This is one: a Full House Devel 9mm owned by close-quarters-battle legend Colonel Rex Applegate. But before we get into the gun itself, we should talk about why Applegate is such a paladin in the field.

Col. Rex Applegate, the scion of Oregon Trail pioneer stock, was the nephew of Remington exhibition shooter Gus Peret. He used to help Peret practice, and thus grew up shooting. Applegate entered active duty in the U.S. Army in 1940 after graduating from college. Shortly after being commissioned as a lieutenant in 1942, he was ordered to Washington, D.C., to the ominously bland-sounding “Coordinator of Information,” an office so secretive it took him days to locate after he arrived. A precursor to the Office of Strategic Services (OSS), itself a precursor to the CIA, the Coordinator himself was none other than Major General William J. “Wild Bill” Donovan. 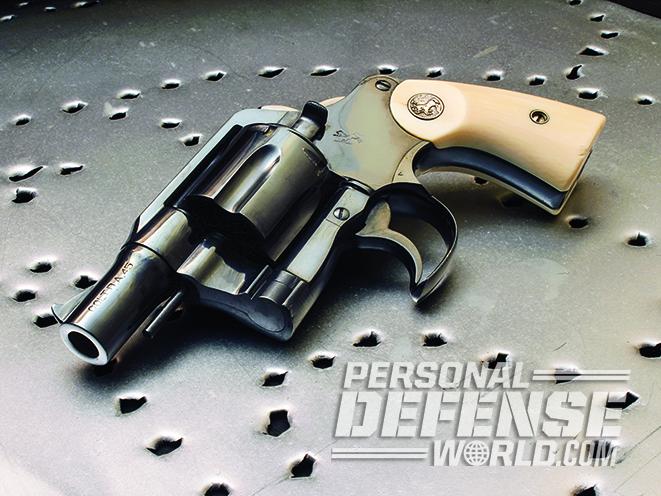 Donovan was an Irish former U.S. assistant attorney general who had been awarded the Congressional Medal of Honor for his service in WWI. His position as Coordinator morphed into head of the OSS, and he promptly tasked Applegate with learning everything he could about violence in order to develop a training program for agents. Applegate, who was among the first regular Army officers assigned to Donovan and the fledgling OSS, took on the task enthusiastically and rather holistically. Among other things, this included visiting prisons to interview convicted murderers about their methods of strangling or stabbing their victims and traveling to Deadwood, South Dakota, where Applegate reviewed a handwritten letter from another Wild Bill—James Butler Hickok—about the shooting technique he’d used in his numerous gunfights.

Another phase of Applegate’s education started when Donovan assigned him to the same sort of fact-finding with William E. Fairbairn of the famous Fairbairn and Sykes duo that ran the Shanghai Municipal Police in the 1920s and 1930s. Claiming some 200 gun and knife fights between them at the time they published their 1942 book “Shooting to Live,” that tally later expanded to 200 gunfights for Fairbairn alone. During WWII, the pair had been summoned back to the UK to teach self-defense to the Home Guard after the debacle at Dunkirk, and later partnered with the OSS. Although initially somewhat unimpressed with Fairbairn, once the much older, much smaller man tossed the 230-pound, 6’3” Applegate across the room in a demonstration, Applegate realized there was still plenty about fighting he didn’t know and applied himself to learning all he could from the wiry Brit, whose specialty was fighting dirty—and winning.

Applegate distilled and refined Fairbairn’s shooting and combat techniques, including the point-shooting technique that Fairbairn and Sykes had developed in Shanghai, which he taught to OSS operatives at the remote installation that is now Camp David. Training included use of the famous Fairbairn/Sykes Commando knife, and during that time Applegate worked with Fairbairn to create a much-improved version later produced as the Applegate/Fairbairn combat knife. Somewhat ironically, a variant currently produced by Boker is now used by the German Special Forces.

Interestingly, during this time period, Applegate didn’t carry his official sidearm, instead substituting a .45-caliber Fitz Special revolver, a formidable piece he described as having some “notches” in its pedigree. Given to him in 1942, the John-FitzGerald-modified Colt New Service had its barrel cut back to 2 inches, the butt shortened for easier concealment, the hammer bobbed and the triggerguard cut away.

After his posting with the OSS, Applegate held a similar position at the Military Intelligence Training Center where he continued to refine the combative techniques he taught with the benefit of being able to rotate instructors and students into the field from which they could use what they’d been taught and report back on its real-world effectiveness. This closed-loop feedback system allowed for continual refinement and likely contributed to Applegate’s thinly veiled contempt for shooting systems he believed were based only on competition. Later in his life, Applegate trained Michael Janich in his point-shooting method, co-authoring the book “Bullseyes Don’t Shoot Back” with him, and Janich has continued the refinement process.

Perhaps as a result of his early work with clandestine service where weapon concealment was critical, Applegate seems to have had an affinity for compact pistols such as his Fitz Special. He also gave significant input leading to Smith & Wesson’s release of the snub-nose Chief’s Special .38 revolver and the later hammerless Centennial variant, a prototype of which was given to him in 1951. Not long after that, in 1955, Smith released the Model 39 in 9mm. This was the first U.S.-made double-action/single-action (DA/SA) semi-auto, prompted by wartime exposure to German DA/SA pistols like the Walther PPK and P38. In the expanded version of his classic text “Kill or Get Killed,” Applegate spoke well of the Model 39, calling it a “fine combat-designed automatic,” and went on about its 8+1 capacity. So he must have really loved the 15-round payload of the larger-capacity Model 59 when it showed up in 1971. With a 4-inch barrel and a full-sized grip, however, it was still a big gun.

Founded by gunsmith and former racer Charley Kelsey, Devel (which means “to strike an incapacitating blow”) was born when Kelsey sent a Smith & Wesson Model 39 to ASP for its legendary conversion package. The ASP conversion included shortening the butt and barrel of the pistol and adding features like the company’s trademark guttersnipe rear sight and clear grip panels so the user could see the cartridges remaining in the cutaway magazines, and cloaking the gun in a then-unheard-of black Teflon finish.

From the sight and finish to the idea of a compact pistol chambered for something more powerful than the .380 ACP, it was groundbreaking—and with its slick, wicked logo of an EKG going to flatline, it made no bones about what it was for. Kelsey, however, was dissatisfied with his dealings with ASP and decided he could do better, and it is this package—the cut-down, single-stack S&W Model 39 and high-capacity Model 59—for which Devel is best known.

While Devel’s basic cut-down Model 39 is one of the most elegantly understated custom pistols I’ve seen, the Full House models are anything but subdued. Leaning heavily on ASP’s inspiration with clear windows in the burgundy Micarta grip panels and an aggressively hooked triggerguard narrowed on one side (right for right-handers, left for southpaws), both features that showed up on the ASP, the Devel triggerguard is far more dramatic—and practical. The trademark S-curve shape lives on in the serpentine curvature of S&W’s 5906, which was clearly lifted from Devel. 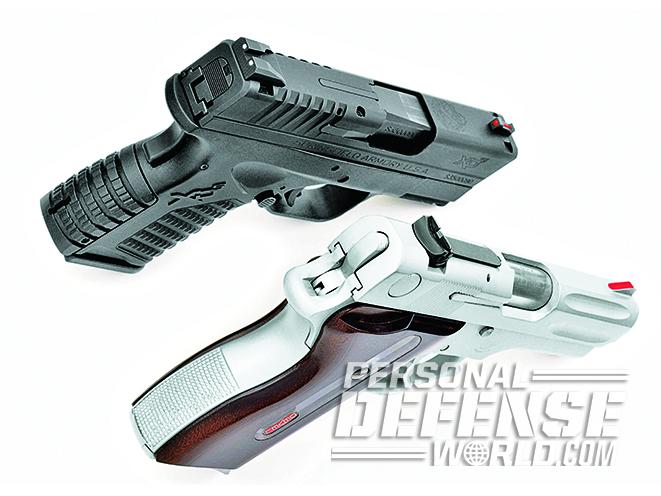 Tale of the Tape: Devel Model 39-2 vs. Springfield XD-S

S&W wasn’t the only pistol manufacturer to benefit from Kelsey’s innovation. The most popular combat pistols at the time were Colt’s Model 1911, S&W’s Model 39 and Browning’s Hi-Power. Not only did Devel work on all three, but each of those companies later incorporated features found first on Devels. This includes the brilliant Hi-Power firing pin safety Devel’s Wil Hauptoff developed at the request of the FBI, as well as using a conical, bushing-less barrel system to overcome the geometry problems in short-barreled 1911s, a system also pioneered by Detonics. We won’t even get into Devel feed ramp inserts, 1911 firing pin safeties, the creation of a rimless .38 Super variant called the 9mm Devel (well before the 9x23mm or Super Comp), or patenting the eight-round magazine. Devel was decades ahead of its time. How good were its products?  A Devel 1911 recently went for over $14,000 at auction.

Applegate’s gun is the classic Full House Devel Model 59. The flat Micarta grips are done up in the burgundy that was a Devel trademark, complete with the window and the oval medallion with the vertical “deVel” logo featuring a large stylized “V.” In addition to the gun being shortened, it has distinctive flutes ground into the slide, which are echoed by matching grooves boned into the Alessi shoulder holster paired with the gun. The shortening itself was no small feat, as it required fabricating a whole new aluminum backstrap for the gun. The triggerguard has the sinuous Devel hook, and the sides of the magazines have all been cut away so you can tell your capacity at a glance—a feature that required laser-cutting to avoid damage to the magazine.

One wonders what drew the Colonel to this specific pistol. There are always rumors of CIA associations with the early compact pistols, be they from ASP, Detonics or Devel; Kelsey was known to have some connection with the Company. But I think the better answer is that in the Devel Model 59, Applegate saw the latest incarnation of what he was seeking with his Fitz Special: a compact, powerful sidearm designed to be used at high speed, even down to the modified triggerguard. The Devel went to auction with two holsters, a Rogers belt holster and an Alessi shoulder holster, and Applegate likewise carried his Fitz Special in both belt and shoulder holsters.

The Devel story ended in bankruptcy. Founder Charley Kelsey tragically took his life in 2003, though his genius lives on in the guns that incorporate his ideas, and in the popularity of fluted ARX-type bullets, a concept he pioneered 20 years ago. Likewise, Applegate lives on in his books, in the descendants of the soldiers whose lives his training saved and in the refined combative system taught by Janich. Special thanks to Michael Janich and Wayne F. Novak.