In the aftermath of the horrific Texas church shooting that left 26 dead and dozens injured yesterday morning, one critical detail has emerged: An armed citizen stepped in and opened fire on the suspect, likely saving multiple lives in the process.

Here’s what Freeman Martin, a spokesman for the Texas Department of Public Safety and a Major in the Texas Rangers, said at a press conference yesterday, via the Daily Caller:

“The shooter of the church had taken off, fled in his vehicle, and the other gentleman came and he said, ‘We need to pursue him,’ that he just shot up the church. So that’s what I did. I just acted,” Langendorff told ABC affiliate KSAT.

Langendorff and the armed citizen didn’t know each other, but Langendorff said he knew the man was from the area.

“I didn’t know him at all,” he said. “I didn’t recognize him. He was just a member of the community, and whenever he came to my vehicle in distress with his weapon he explained very quickly what happened and he got in the truck and I knew it was just time [to go].”

The two men then pursued the suspect in Langendorff’s vehicle.

“He got a little bit of a jump on us,” Langendorff said of the suspect. “So we were doing about 95 [mph] down the 539, going around traffic and everything.”

Langendorff said that during the chase, he was on the phone with police informing them of the situation.

“I was on the phone with dispatch the entire time,’ he said. “I gave them the direction we were going, on what road and everything, and that the vehicle was in sight and that I was getting closer and closer to him.”

Eventually, the suspect lost control of his vehicle and crashed it into a ditch about 11 miles north of the church. Langendorff pulled his vehicle to within 25 feet, the Washington Post reported.

“The gentleman that was with me got out, rested his rifle on my hood and kept it aimed at him, telling him to get out. There was no movement, there was none of that. I just know his brake lights were going on and off, so he might have been unconscious from the crash or something like that, I’m not sure,” Langendorff said.

Police were on the scene in five to seven minutes.

“The police arrived and they pushed us back and they took care of the rest,” Langendorff said.

Martin told reporters the suspect was found dead in his vehicle from a gunshot wound. It’s yet to be determined if the wound was self-inflicted or if he was shot by the armed citizen.

Kevin Jordan, a witness who lives near the church, told CBS affiliate KENS5 he was outside changing the oil in his car when the shooting started. He said he saw the gunman open fire outside the church. The gunman then turned and saw Jordan from a distance, and took a shot at him. Jordan ran inside, but he says the bullet went through his window, barely missing his two-year-old son.

“Our neighbor, who’s a very good guy, a very big Christian, he’s the nicest person on the planet [and] will do anything for anyone around here,” Jordan said. “We’ve known him for years, he’s childhood friends with my dad. He came with his [gun] and he took cover behind a car and he shot the guy. I’m not sure if it was inside the church and the guy was coming out, but if it wasn’t for him the guy wouldn’t have stopped.

“That’s when the [suspect] got in his vehicle and drove off and our friend shot through the window trying to get him again and the [suspect] apparently crashed down the road.”

Jordan, who is a medical assistant, went to the church to administer aid to the victims.

“I can’t even describe everything I saw,” he said.

23 people were reportedly found dead inside the church. Two were killed outside the church, and one person died after being transported to an area hospital.

But he added that his neighbor prevented a horrific situation from becoming even more dire.

“If it wasn’t for our friend–he stepped in–there might have been more lives lost,” Jordan said.

The suspect has been identified as 26-year-old Devin Patrick Kelley of New Braunfels, Texas. The San Antonio News-Express reports that Kelley was an Air Force veteran who served as a logistics readiness specialist at Holloman AFB in Alamogordo, N.M. In 2012, he was court-martialed for two counts of assault against his wife and assault on their child. He was sentenced to 12 months confinement and given a “bad conduct” discharge in 2014. 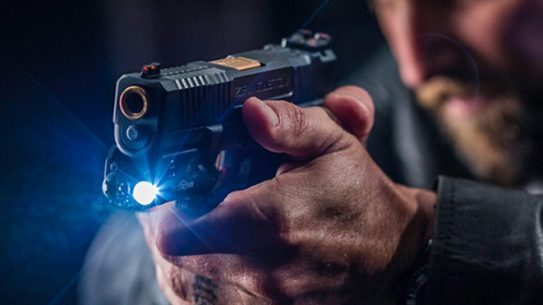 Designed for concealed carry use, the SureFire XC1-B has a 300-lumen LED output and...