The story of the deadly church shooting in Sutherland Springs, Texas is continuing to develop: President Trump has commented on the situation, the good guy with a gun has been identified, and it’s been revealed that the killer passed a NICS check despite his past conviction for domestic violence.

Speaking at a press conference with Japanese Prime Minister Shinzo Abe during the first leg of his Asia trip, President Trump said, “I think that mental health is your problem here. This was a very—based on preliminary reports—very deranged individual. A lot of problems over a long period of time.”

Trump made it clear that his support of Second Amendment rights remained unwavering.

“This isn’t a guns situation,” Trump added. “I mean, we could go into it, but it’s a little bit soon to go into it. But fortunately, somebody else had a gun that was shooting in the opposite direction, otherwise it would have been—as bad it was—it would have been much worse. But this is a mental health problem at the highest level. It’s a very, very sad event.”

On Tuesday, Trump was asked at a press conference in South Korea—the next leg of his Asia trip—if he would favor “extreme vetting” for gun buys.

“If you did what you’re suggesting, there would have been no difference three days ago,” Trump responded. “You might not have had that very brave person who happened to have a gun or a rifle in his truck, go out and shoot him and hit him and neutralize him.”

Trump continued: “I can only say this. If [the armed citizen] didn’t have a gun, instead of 26 dead, you would have had hundreds more dead. So that’s the way I feel about it. [More gun laws are] not going to help.”

Speaking of the armed citizen who stepped in and engaged the suspect, he’s been identified as Stephen Willeford. A former NRA instructor, Willeford’s family has lived in the Sutherland Springs area for four generations and he had numerous friends who were inside the church when the shooting started. In an interview with ABC affiliate KHBS/KHOG, Willeford said he was at home when his daughter came into his bedroom and told him she heard gun shots at the First Baptist Church nearby.

Willeford ran and grabbed his rifle out of his safe while the shooting continued.

“I kept hearing the shots, one after another, very rapid shots – just ‘pop pop pop pop’ and I knew every one of those shots represented someone, that it was aimed at someone, that they weren’t just random shots,” Willeford said.

Willeford loaded up his rifle and went across the street. When he saw the suspect, he opened fire.

“He saw me and I saw him. I was standing behind a pickup truck for cover. I know I hit him,” Willeford said. “He got into his vehicle, and he fired another couple rounds through his side window. When the window dropped, I fired another round at him again.”

Willeford shot the suspect twice—once in the leg and once in the torso.

“I know I hit him,” Willeford said. “He got into his vehicle, and he fired another couple rounds through his side window. When the window dropped, I fired another round at him again.”

As we previously reported, the killer sped off in his car. That’s when Willeford approached a nearby witness, Johnnie Langendorff, and the two men gave chase in Langendorff’s truck. The two men eventually caught up to the suspect’s car, which hit a road sign, flipped and went into a ditch. Willeford got out, put his rifle on the hood of Langendorff’s truck, and ordered him to get out, but there was no movement. Police arrived at the scene and found the suspect dead of a self-inflicted gunshot wound to the head.

“I’m no hero. I’m not,” Willeford said. “I think my God, my Lord, protected me and gave me the skills I needed to do what needed to be done.”

In 2012, Kelley—an Air Force veteran who served as a logistics readiness specialist at Holloman AFB in Alamogordo, N.M.—was court-martialed for kicking, choking and striking his then-wife. He also hit her child “on the head and body with a force likely to produce death or grievous bodily harm,” according to court martial documents released by the Air Force on Monday. After doing a year in confinement, he was released from the service in 2014 and given a bad conduct discharge.

The domestic violence conviction should have been enough to prevent Kelley from obtaining any guns, but it appears the Air Force never reported it to the National Instant Criminal Background Check System (NICS). This enabled him to buy firearms.

“Initial information indicates that Kelley’s domestic violence offense was not entered into the National Criminal Information Center database by the Holloman Air Force Base of Special Investigation,” Air Force spokeswoman Ann Stefanek said in a statement. “Federal law prohibited him from buying or possessing firearms after this conviction.”

Inside Kelley’s vehicle was a Ruger AR-556 rifle, as well as one Glock handgun and one Ruger handgun. All together, Kelley purchased four guns—two in Colorado, and two in Texas—between 2014 and 2017. The two in Texas were bought by Kelley at the Academy Sports and Outdoors store in San Antonio after passing the NICS check. 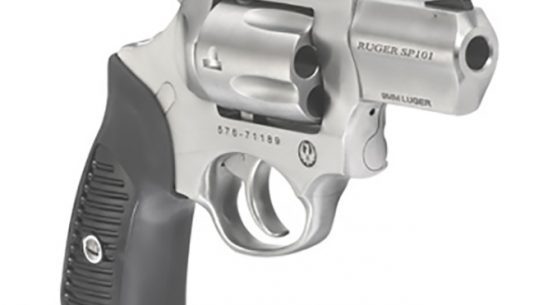 The Ruger SP101 Revolver Is Now Available in 9mm