by Abner Miranda
in Guns, Handguns
0

The first job I had after leaving law enforcement was as a body armor representative for a defense contractor. It was a great gig. I enjoyed the freedom; it allowed me to travel and meet many different people. One of the neat things I got to do was to conduct shooting demos to show off the capabilities of our armor, and I distinctly remember my boss telling me, “Never allow the use of sub-machine guns on soft armor!”

Why? Well, it’s very simple. The National Institute for Justice (NIJ) ratings for soft armor are based around pistol-caliber velocities. Where everything gets crazy is when you find a way to make something like the common 9mm increase in velocity way beyond the norm for handguns. Simply put, if you accelerate the 9mm enough, you’ll be getting rifle performance out of a handgun round. Yeah, that’s kind of scary. The 9mm is really good at wrecking body armor, and that’s what I want to talk with you about today.

The first time I saw one of these, I remember thinking, “Now that’s a good idea.” I have always preferred to have an EDC setup that shares mags so that if I find myself having to grab and go, I at least have a spare load or two to fall back on. The UDP-9 from Angstadt Arms is such a unique little weapon that it really deserves a closer look if you’re interested in setting up a truck gun. The term “truck gun” has gotten a lot of play in recent years, and I fear that folks have forgotten what that is really supposed to mean. 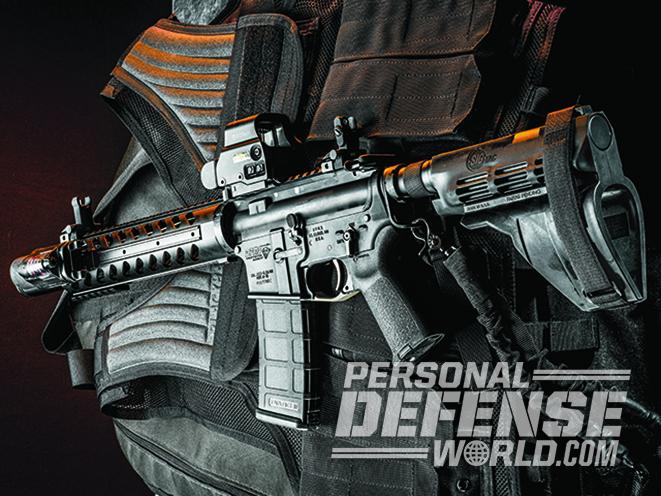 A truck gun should be a weapon capable of being cable-locked to your vehicle and forgotten about until that terrible day when you need it. Such a weapon should be capable of crossing state lines with little thought to its condition or legality. That is to say that it should be legal in the states where you normally travel without having to change its status. And Angstadt‘s UDP-9 Pistol variant has a high potential for being a great truck gun.

As mentioned, once you accelerate the 9mm above handgun velocities, it truly becomes an astonishing round. As an armor representative, I was told no submachine guns because they have been known to zip 9mm FMJs right through Level IIIA vests. So imagine how effective you could be against a body-armor-clad active killer if you came to the fight with your own subgun-style weapon hidden in a small bag.

I have this UDP-9 set up to reflect deep concealment in a regular-sized backpack. At 19.75 inches in length and 9.75 inches in height, the UDP-9 does “tiny” quite well. It weighs in, as you see it here, at 5.9 pounds. This is a sturdy weapon, and it shows in its build quality. The UDP-9 boasts a 7075-T6 billet upper and lower set that fits together exceptionally well. There is zero slop between the two pieces, and that’s noteworthy.

The lower receiver has an oversized, integrated triggerguard that segues into a flared magazine well that smoothly accepts most 9mm mags. It bears noting that the UDP-9 accepts the Glock 19‘s 15-round mags. I tested both OEM Glock and Magpul magazines without any issues. I particularly like the fact that the UDP-9 accepts Magpul’s PMAG 21 GL9s, which are my go-to mags because I can cleanly conceal one on each side of my blue jeans’ back pockets with little effort.

A quick rundown of the specs reveals a weapon built for speed. The UDP-9 has also been made with end-user maintenance in mind. The 9mm bolt assembly plays nicely with standard AR-15 trigger group hammers. The fact that the UDP-9 doesn’t need a gas block, roll pin or gas tube made me smile. This is a blowback-operated weapon, so the barrel is a sleek 6 inches of chrome-moly-vanadium, 1-in-10-inch-twist, Melonite-coated goodness. The unit I received came with Angstadt’s multi-port flash suppressor. It’s made from 4041 hardened steel with a black nitride finish. The 5.5-inch, free-floating ODIN Works KeyMod handguard features a continuous top Picatinny rail and mounting positions at 3, 6 and 9 o’clock. The KeyMod slots double as anti-rotation QD mounting points. Yeah, that’s cool, too.

This test unit came with a KAK pistol stabilizing brace. However, I reached out to the fine folks over at Maxim Defense, and they sent me their PDW Brace for AR-15s. This thing is a giggle fest because you get the best of both worlds in this brace. It’s adjustable and collapsible while serving as a sturdy arm brace. Another neat feature of the Maxim Defense PDW Brace is that it is almost identical in length and function as the company’s stock. This thing goes on very quickly using a castle nut wrench. My favorite part about the brace is that it allows for the use of standard bolt carrier groups. That’s a big deal, folks. As far as I can tell, this brace didn’t change the recoil impulse of the UDP-9 in a significant manner.

Upon zeroing the UDP-9 Pistol, I realized why I seldom see folks running backup iron sights (BUIS) on these weapons. It’s very difficult to get a proper dope on 9mm elevation. The 9mm just doesn’t fly like rifle rounds—no matter what I tried, I just couldn’t get my BUIS to meet up with the point of impact. I stripped them off and just relied on my Aimpoint Micro T-2 red-dot sight mounted on a Daniel Defense Micro Mount. This allowed me to attach an Inforce WML at the 12 o’clock position, which is the best place to have a light anyway. I swapped out the mil-spec safety with an ambidextrous set from Battle Arms Development. I also ditched the OEM Magpul K2 pistol grip, as I prefer a classic MOE+ grip as my standard. I find the K2 grips a little lacking in the control department and prefer to have more of a rearward cant. 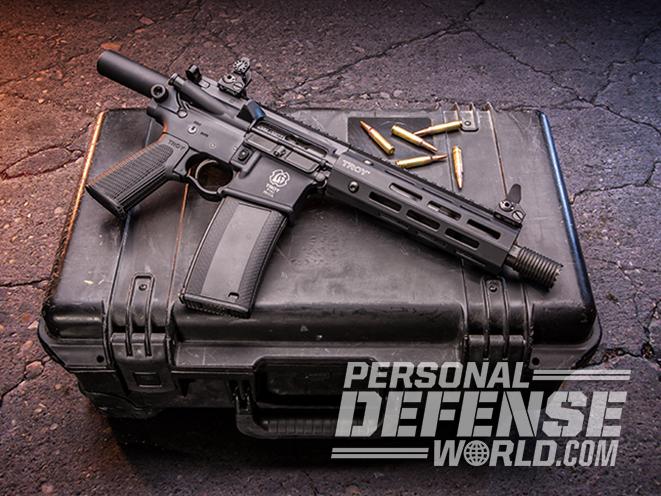 I sent a decent amount of Black Hills 115-grain FMJs through the UDP-9 and found it reliable and consistent. This thing is so much fun to shoot that you have to put the brakes on or else you’ll blow through a case of ammo in no time flat. It’s a unique thing to watch 9mm rounds stack upon themselves the way this weapon can deliver them.

I was curious to see how consistent the UDP-9 was in locking the bolt to the rear. This is also contingent on the magazines you use, but I was pleased to see that thus far it has locked back each and every time. The bolt carrier group on the UDP-9 is hefty, and the one-piece construction makes for a robust and simple blowback design that’s a pleasure to work with. Gone are the little bits that create malfunctions with standard AR-15s. The gas rings, gas key, gas tube, gas block and barrel gas port are all conspicuously absent in the UDP-9, making for a simple, rugged design. Yet all of the familiar AR-15 controls are there with none of the issues. Also, the UDP-9 is less likely to give you issues if you switch from one 9mm round to another.

Very few things really surprise me anymore. The firearms industry is currently lacking in innovation, so when something unique like the UDP-9 comes along, it’s really nice to see. Until I looked at the issues with SBRs through the eyes of a friend who lives in Rhode Island, I couldn’t fully appreciate the UDP-9. If you live in a restricted state, you’re going to have trouble possessing SBRs. However, AR-based pistols are legal. Go figure.

So, with the UDP-9 Pistol, my friend can enjoy shooting sports with his wife and kids as well as have a very fast and effective home-defense weapon. That’s the genius behind AR-based pistols. The Angstadt Arms UDP-9 Pistol takes this to the next level and gives you a true “can-do” weapon.