by Robert A. Sadowski
in Guns, Handguns
0

The Rex Zero 1S pistol from Arex is new, but not really. At first glance, it might seem like a traditional double-action/single-action (DA/SA) semi-auto, but it’s a whole lot more than just that. The Rex Zero 1S is a complete overhaul of previous DA/SA designs. Its reliability breeds confidence, it hits exactly where you want it to, and it’s very affordable.

When I discussed the pistol with one of Arex’s project managers, I learned that the company’s intent was to build a full-sized, all-metal pistol with all of attributes of a world-class pistol like the Beretta 92 and Sig Sauer P226, but without the traits and characteristics that these platforms often get dinged for. So, the Rex Zero 1S isn’t a copy—it’s a completely redesigned fighting pistol that allows shooters to carry the pistol “cocked and locked” or in traditional DA/SA mode. And options are a good thing.

To start, the Rex Zero 1S is a locked-breech, short-recoil-operated pistol. The barrel’s breechblock locks into the slide, as it does with a Glock or Sig Sauer pistol. This is a proven system. The Rex has a long DA trigger pull, but not so much that shooters with smaller-than-average hands will have a hard time firing the first round.

And let’s get one thing out of the way immediately: The Rex Zero 1S looks and acts a bit like a P226, but it brings some added functionality that the Sig lacks. The Rex Zero 1S has a decocker similar to the P226, which allows a user to safely decock the pistol’s hammer from the fully cocked rearward position. The Rex’s unique feature, however, is a manual thumb safety. This allows the pistol to be carried cocked and locked like a 1911-style pistol. 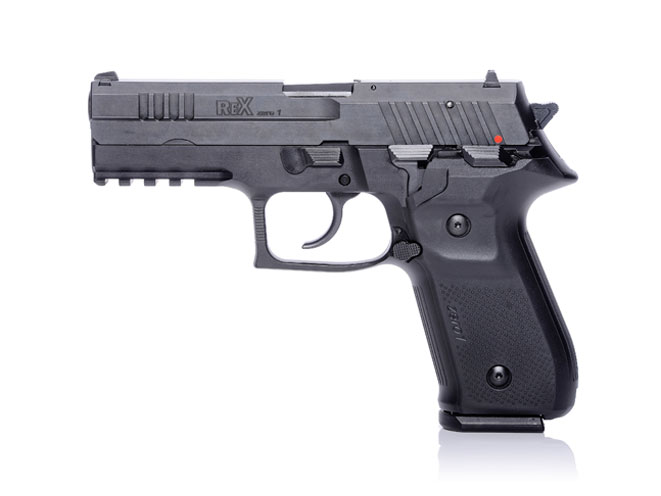 With the thumb safety engaged, the trigger is disconnected, yet the slide can be manipulated to clear the gun. This makes the Rex quite user friendly. All of the controls—except the decocker and slide stop—are ambidextrous right out of the box. Other built-in safeties include the loaded-chamber indicator and the firing pin safety, which requires the trigger to be fully pulled to the rear to fire the pistol.

The Rex Zero 1S’ slide is machined from solid bar stock with front and rear cocking serrations that are coarse and easy to grasp. Steel, three-dot sights are mounted to the top of the slide via dovetail cuts, making it easy for shooters to replace the sights if needed. Within the slide is the 4.3-inch barrel, which is cold-hammer forged from solid bar stock. The recoil spring is set up in a traditional configuration, with one coil wound around a one-piece metal guide rod.

The frame of the Rex Zero 1S is made from 7075-T6 aluminum with matte black hardcoat anodizing. Serrations are milled into the front- and backstraps, which allows a user to acquire and keep a good grasp on the pistol, even during rapid-fire strings. The triggerguard is large and squared off. I tested the pistol while wearing gloves and found the triggerguard to be very accommodating in this regard. Like the P226, the slide rides on full-length rails built into the frame for enhanced accuracy. The pistol also has a Picatinny rail machined into its dust cover.

Unlike some manufacturers on the market, Arex makes its own magazines for the Rex Zero 1S. Each magazine features a unique progressive-rate spring that becomes stiffer or more resistant as it is compressed.

This ensures cartridges are reliably pushed upward when the slide cycles. In testing, it was easy to load each magazine fully, even when it came to the final 17th round. Each magazine also has a metal body with clearly marked witness holes for all 17 rounds, and it’s coated inside and out for corrosion resistance.

In short, this is a well-made pistol. The fit and finish on my test gun were excellent. Even the interiors of the slide and frame were beautifully finished. Another positive is the fact that the pistol can be quickly field-stripped without tools. Just remove the magazine, lock the slide back, flip the takedown lever 90 degrees, carefully release the slide stop while holding the slide and pull the slide assembly off the front of the frame.

The Rex Zero 1S would make an excellent military and law enforcement sidearm, but you don’t take my word for it. According to Slovenia’s Ministry of Defense, the pistol passed all of the requirements set forth in the STANAG 4512 NATO Small Arms Test Manual. This consists of a litany of torture tests, including surviving extreme cold and hot temperatures, ice and humidity, firing without lubrication, salt spray, dust, mud and dropping the weapon from a vehicle. The requirements also ensure a pistol is safe in terms of mechanics and feeding. Of course, reliability and safety are only two sides of the triangle. Accuracy and dispersion testing were also involved as well as parts interchangeability. On top of all this testing, Arex includes a lifetime warranty with each Rex Zero 1S pistol. 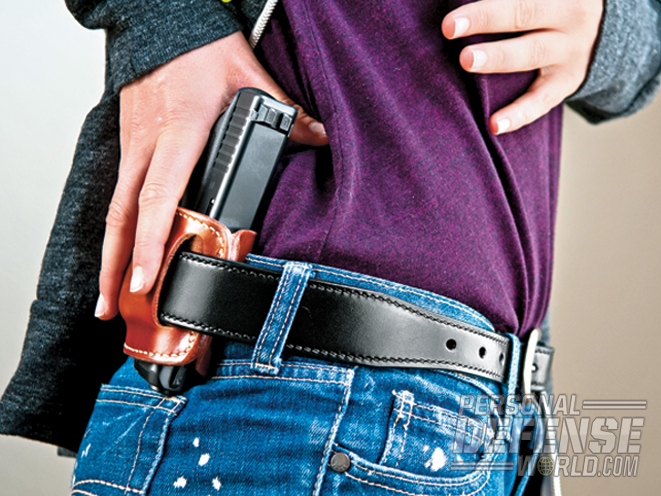 For test ammunition, I chose Hornady’s American Gunner 115-grain XTPs, Winchester’s 147-grain Train & Defend loads with either FMJs or JHPs, and 115-grain FMJs from Aguila. The Aguila ammunition proved to be the fastest with a muzzle velocity of 1,145 fps on average. This load also created the best five-shot group at 25 yards, which measured 1.17 inches. The average accuracy with each load ranged from 1.37 to 1.92 inches.

I fired the Rex Zero 1S in DA mode, decocking the pistol after each shot to get a feel for its DA trigger. Of course, my best accuracy came in SA mode while using a rest. The slide functioned smoothly, and the gun was soft on recoil. I was able to get back on target quickly for fast follow-up shots. In general, it was very easy to shoot well with this pistol, and its 9mm chambering ensured it was comfortable throughout the range session.

The pistol also ran flawlessly with all of the test ammo—just like some other European pistols with notable pedigrees. As much as I tried to confuse this Slovenian-made pistol with either U.S.- or Mexican-made factory ammunition, it still fired. This included light and heavy bullets as well as hot and not-so-hot loads. It chewed through each load with aplomb. The gun was accurate, and its large, easy-to-see sights kept me on target. I also didn’t find the grip to be too chunky, like some other metal-framed double-stack pistols. The DA trigger press was a bit heavy (12.9 pounds on average) but smooth after the initial take-up. In SA mode, the trigger broke cleanly at 5.6 pounds on average after a bit of take-up.

The Rex Zero 1S runs as well as any of the other more well-known European pistols, and it would make a fine combat sidearm or self-defense weapon for CCW permit holders who prefer full-sized pistols. In testing, it was reliable and accurate, demonstrating the consistency I expect and demand in a defensive weapon. It also has an attractive price that is very competitive for the market. The classically styled Rex Zero 1S is economical, rugged, accurate and ready for duty.

*Bullet weight measured in grains, velocity in fps by chronograph and accuracy in inches for best five-shot group from 25 yards.