If someone asks for firearms advice for home defense, what comes to mind? The answers received will surely vary depending on the questioner’s perceived overall skill and each respondent’s own level of training and experiences. No doubt some would offer up the utilitarian 12-gauge, pump-action shotgun as the best option. This is based on the gun’s simplicity, flexibility, reliability, price and potency, especially considering the distances that typify home-defense situations. Well, the new 12-gauge Mossberg 590 Shockwave might just be the perfect choice for this role. 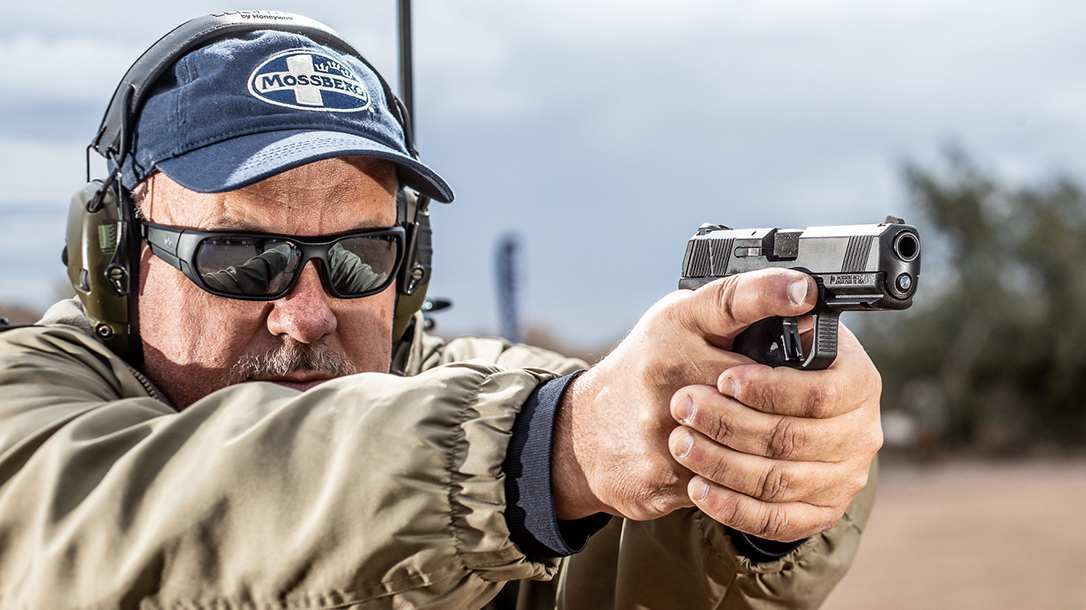 The Details on the Mossberg Shockwave

Pump-action shotguns have been around for a long time. Many casually dismiss the shotgun as being no longer viable; they’re considered relics associated with WWI trenches or police cruisers that have been surpassed by the plethora of black rifles now on the market. But the combat shotgun’s utility should not be doubted or held in disdain once its role is understood.

Whatever their label—combat, tactical, self-defense—shotguns can be had in various forms ranging from double-barreled, pump-action, semi-auto and even lever-action designs. The Mossberg 590 Shockwave takes this a step further. It features a Raptor bird’s-head grip and a 14-inch barrel. Do not stop reading this article by assuming it involves NFA Class 3 restrictions. The Mossberg 590 Shockwave can be purchased with the basic paperwork associated with most any other over-the-counter firearm purchase.

A review of the Gun Control Act of 1968 that defines the characteristics of a short-barreled shotgun (SBS) is the key. Since the Shockwave is manufactured from the start with a Raptor bird’s head grip and maintains an overall length greater than 26 inches, it is considered a regular firearm and not an NFA-regulated item, even with its 14-inch barrel.

The inherent flexibility of shotguns, especially pump actions, to digest a variety of ammo types such as birdshot, slugs, buckshot, less-lethal, low-recoil, breaching, etc., is their greatest attribute. The Mossberg Shockwave tested herein is a pump action with polymer furniture and an alloy receiver that will handle all of these rounds while exuding an all-business air.

Research into the Shockwave concept shows serious influence from a similar model used by the U.S. Marshals Witness Protection Program. Other anecdotes mention various law enforcement units specializing in stakeout surveillance turning to the close-range firepower potential of the compact shotgun. High-value prisoner transport teams have also made use of shotguns similar to the Shockwave.

No one can be all-knowing in every facet of a subject as broad as personal defense. One of the places I look to for keeping me informed and grounded is Suarez International, which contains different operating entities ranging from a training division, a tactical gear store and even its own custom firearm manufacturing division.

Gabriel Suarez is the owner and CEO of Suarez International. He is a controversial figure for a variety of reasons, including his outside-the-box thinking when it comes to the methods and tools that best serve individuals in personal-defense situations. But you can be sure that any ideas or products presented by Suarez are well thought out and proofed during numerous training cycles and personal application in the field under the most rigorous conditions.

Suarez International is offering its own take on the pistol-grip shotgun with its Stakeout model. This is what made me take notice of the concept and so willing to explore the concept in the form of the Mossberg 590 Shockwave.

We depend on subject-matter experts for recommendations and guidance. This approach assists in getting us up to speed as quickly as possible when increasing skillsets. My testing of Mossberg’s Shockwave was based on Suarez’s quality videos and articles discussing best practices with pistol-grip shotguns. For example, firing from the hip is not the best way to deploy the Shockwave effectively.

Bringing the Shockwave up to eye level, while keeping it out in front, away from your face, produced the best on target results. Recoil was managed by maintaining forward pressure on the forend in conjunction with a rearward pull on the bird’s-head pistol grip. Gabe describes it as trying to stretch the shotgun apart. Recoil with the Shockwave is stout, and anyone telling you any different should be scrutinized. Proper technique is important, as is taking advantage of the growing amount of low-recoil shotgun rounds becoming available. The Mossberg 590 Shockwave is also not for smaller-statured shooters.

The receiver of the Mossberg Shockwave is constructed of aircraft-grade aluminum with the bolt locking into a steel barrel extension. The weapon is designed to facilitate maintenance under field conditions, with easy access to internal components. The magazine has a removable end cap, spring and follower for straight-through cleaning. It’s also easy to remove the barrel for detailed cleaning and maintenance.

The receiver-mounted safety is convenient for right or left-handed shooters; simply push the button forward and you’re ready to fire. In addition, the 590 features an anti-jam elevator for reliable feeding and dual extractors for positive extraction/ejection.

There is something reassuring about the power of a shotgun for any close-range engagement, which is what most civilians face. In terms of personal defense, buckshot loads predominate. Yes, other loads exist, but they’re frankly not relative to the role envisioned with the Mossberg Shockwave.

There are various types of buckshot, but we will confine our discussion to 00 buckshot shells generally loaded with eight or nine .33-caliber pellets weighing 54 grains each. (As a side note, many advocate the use of #71/2 or #8 birdshot in a shotgun for use in a home to limit any chance of overpenetration. A column of birdshot at close range such as across a room is lethal due to not having time to disperse.)

For 00 buckshot testing, I used Hornady’s Reduced Recoil ammo as well as Federal’s Low Recoil FliteControl rounds. The Federal Premium buckshot load utilizes a special wad for tighter buckshot patterns, thus a longer effective range. Based on prior experiences and exposure to numerous shotguns and loads over the years, specialized buckshot loads such as the Federal Premium FliteControl are a primary choice.

However, the role of the Shockwave as a close-range blunderbuss could justify the use of conventional-patterning buckshot. The newer buckshot loads with specialized wads could maintain too tight a pattern at distances most associated with practical deployment of the 590 Shockwave, limiting one of the greatest attributes of a shotgun: lead dispersal. Users will have to determine what bests suits their needs.

Supplementing the buckshot for testing with the Mossberg Shockwave was the innovative 12-gauge Winchester PDX1 loading combining a 1-ounce slug and three 00 pellets. The Winchester PDX1 load harkens back to the “buck and ball” loads used by our forefathers against the British in the Revolutionary War and each other during the Civil War. These loads stretch preconceived 12-gauge lethality notions even further with their combination of slug and buckshot.

Range testing of the Winchester PDX1 raised eyebrows, combining single-projectile performance and a 10-inch pattern spread out to 20 yards—with one of the holes being made by the 1-ounce slug. If you could choose only one load for use in a combat shotgun, the Winchester PDX1 may very well be it.

I evaluated the 590 via drills involving moving between barricades; think emerging from a bedroom into a hallway. Another niche role the pistol-grip shotgun found in the law enforcement arena is as a CQB force multiplier, especially in and around vehicles. So I used the Echo Valley Training Center’s range cars to simulating responding to ambushes.

The Shockwave has a 5+1 capacity, which I augmented with a Mesa Tactical four-shell carrier on the receiver. Frankly, the role the Shockwave is envisioned for will not require more than this capacity. If the situation allows for or demands more volume, a BlackHawk bandoleer and forearm shell holder are two of the more successful ways. Also, you can look to the BlackHawk Omega tactical shotgun vest to carry more ammunition. If a user requires a more discreet method, however, shotgun rounds can simply be carried in pockets.

My initial hesitancy and concerns about recoil management were allayed thanks to firing technique, the bird’s-head grip and the low-recoil buckshot rounds. I discovered a rhythm, making the most of the natural recoil impulse to rack the slide, eject the spent hull, load a fresh shell and bring the Shockwave back up to my line of sight. The centrally located safety was simple to find and manipulate as required.

What is so attractive about the pump-action Mossberg Shockwave? It boils down to the its simplicity, reliability and close-quarters lethality. At point-blank range, the Shockwave’s near-0.75-inch-diameter bore is devastating. Buckshot’s natural dispersion as it travels downrange creates an impressive cone of firepower.

A 6-inch-diameter pattern at 10 yards translates into a 1-square foot area of terminal ballistic destruction. Eight or nine .33-caliber pellets smashing into a target will stop any fight. The Mossberg 590 Shockwave is a specialized weapon created for close-range superiority. Give it a try. For even more info, visit mossberg.com.

*Velocity measured in fps and pattern in inches.

This article is from issue No. 204 of”Personal & Home Defense” magazine. To order a copy, visit outdoorgroupstore.com.