Nighthawk dares to build the very best firearms other people haven’t. That extends to the all-new "Chairman" pistol — a 6-inch, long-slide 9mm 1911.

In the firearms industry, there are plenty of manufacturers which make personal pistols; and then there are the ones which take building pistols personally.

Nighthawk Custom, born and raised in Berryville, Ark., is just such a company. Guided by its “One Gun, One Gunsmith” mentality, each pistol at Nighthawk Custom is built from birth to bang by a single gunsmith. Assembly line work is impossible during the manufacturing process. 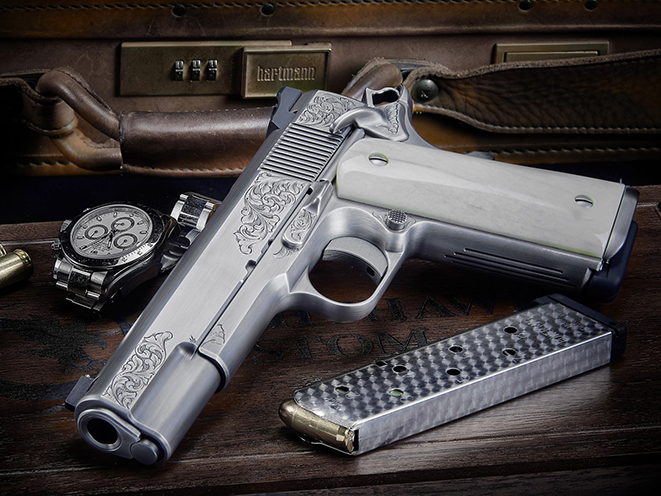 Nighthawk VIP Pistol: PDW’s ‘Gun of the Month’ for October 2017

According to Nighthawk Custom, all parts used in the pistols are fully machined from bar stock steel and fit to each gun by hand. Nighthawk pistols have no drop-in, cast, or MIM parts, ensuring each pistol isn’t just custom assembled, but completely custom built.

Both Nighthawk Custom and the gunsmith’s commitment to the pistol is forever because every pistol has not just Nighthawk’s name etched on the gun, but if you look under each pistol’s left grip panel, you’ll find the gunsmith’s initials as well. It’s this kind of pride in ownership that enables gunsmiths to build the very best firearms they can.

They dare to build the very best firearms other people haven’t. That extends to the all-new “Chairman” pistol — a 6-inch, long-slide 9mm 1911.

Welcome to the Boardroom

The Nighthawk Chairman is the first of a new “Boardroom” series of pistols by Nighthawk Custom.

Chambered in 9×19mm Parabellum, the pistol features a 6-inch, highly polished DLC (Diamond-Like Carbon) with TiN (Titanium Nitride) barrel, and sports a tri-cut slide with holes in the slide to show off the barrel. The slide also has 45-degree angle radius cuts on its front.

Nighthawk lists the Chairman at an MSRP of $4,195.

“DLC coating makes the finish hard and tough able to withstand holster wear and use while looking inspiring,” said Charles Anderson, a spokesperson for Nighthawk Custom. “The Titanium Nitride (TiN) coated barrel makes for unique highlights that is showcased via the ported slide while increasing lubricity and reducing barrel wear. The front sight gold bead adds yet another hint of sophistication without stepping over the line into gaudy.”

According to Nighthawk, it created the Chairman because nobody else had done it, and they believed they could.

“Six-inch long slides are notoriously heavy and have been difficult to make run consistently using lighter 9mm rounds until now,” Anderson said. “Our engineers have been working two years on this project to find the perfect balance of slide lightening and recoil management perfecting this gun. From +P to 115-grain round ball range ammo, this gun functions flawlessly and makes a statement while doing it.” 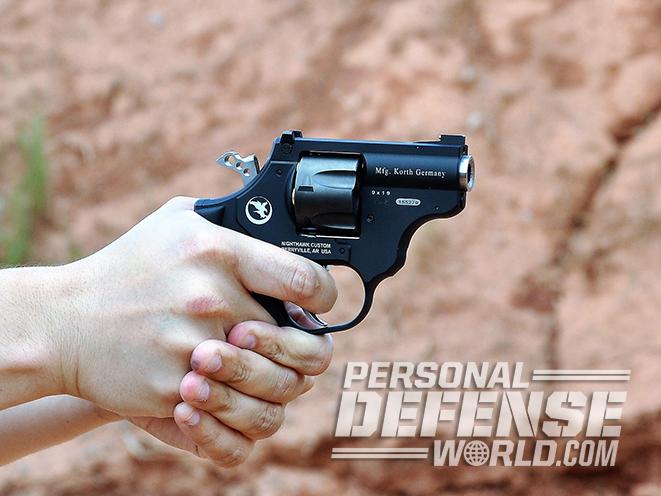 During the recent Athlon Outdoors Rendezvous in Gateway, Colo., I had the privilege to see and shoot the Chairman. I left wanting my name etched on one too, which came as no surprise to Nighthawk Custom.

“We knew that it would be an extremely accurate and soft shooting pistol,” Anderson said. “We also wanted to tackle the challenge of lightening the slide to make the 6-inch 9mm run reliably. When we got done with the mechanical aspects, the finish was tailored to the look of the gun.”

On the range, the 1911 platform shot and functioned flawlessly throughout the day. Accuracy was as good as I could shoot.

Anderson echoed my own experience, stating that “because of the long sight radius, combined with the gold bead front sight, and the (almost) non-existent recoil, this gun will ring steel plates at 100 yards offhand with even inexperienced shooters.”

It was, as advertised, a soft shooter too, with heads turning only to see the impressive metal work by the gunsmiths and never from recoil. Despite the longer barrel, the pistol never seemed clumsy. It was easier to use, sight and recover from than many other pistols.

“This pistol was created for someone who is looking to make a statement with the 1911 they purchase,” Anderson said.  “This gun will almost certainly become your ‘go-to gun’ for everything from range time to showing off with friends.”

If Anderson’s words prove to be true, then I don’t know how much more personal a pistol can get.