Never bring a fake gun to a real gunfight. A mysterious video showing a pair of robbery suspects using a fake gun to rob a 7-Eleven, only to get shot at by a man armed with a real one, has been making the rounds online this week. Watch the footage, which contains graphic language, above. Why do we call this video “mysterious,” you ask? Read on to find out. 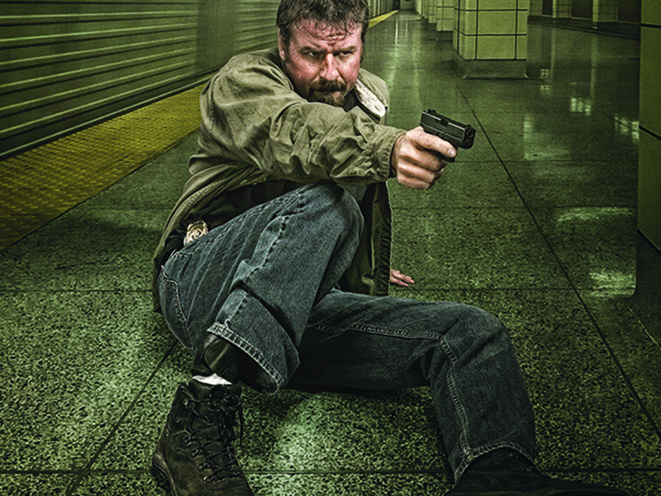 As all this is going on, a man in uniform suddenly bursts in with a revolver drawn and opens fire on the two suspects, who yell out at the gun they’re using is fake.

“Oh well, mine’s is real,” the man responds, ordering the bad guys to get up and put their hands behind their backs, and instructing the cashier to dial 911.

“Am I shot?” one of the robbers can be heard asking.

The uniformed man then jumps over the counter, and the video ends.

The video was posted to YouTube last Thursday and has racked up more than 1.5 million views, but here’s where the “mysterious” part comes in: The description reads, “Damn good shot! Hamilton NJ 7-11 near Ham West HS,” which would indicate that the robbery took place at a 7-Eleven near Hamilton High School West in Hamilton, N.J. But a cashier who works at that 7-Eleven told New Jersey 101.5 that staff there had gotten inquiries about the video, and it wasn’t his store.

And what’s up with the uniformed man? As NJ 101.5 points out, some YouTube commenters said the patch on his jacket seemed to indicate that he may work for the New Jersey Department of Corrections, but DOC spokesman Pat Lombardi said neither the patch nor the jacket matched the one issued to its guards.

Hamilton Police Lt. Michael Kelvy said that after getting multiple media inquiries about the clip, he was told by the 7-Eleven corporate office that the robbery took place in Compton, Calif. No other details about the robbery have been imparted by authorities, NJ.com says.

After all this was revealed, the YouTube user who uploaded the clip, “Myles T,” updated the description on the video to read as follows: “Damn good shot! One bad neighborhood USA, Maybe Compton CA according to NJ.com. Got it from a NJ 7-11 who thought it was Hamilton West HS adjacent. Hamilton Cops investigated? Nothing better to do?”

“Myles T” has one other video on his account. It was posted on Feb. 3 2015 and purportedly shows a man firing an AK rifle at The Cove Campground in Gore, Va.

The 7-Eleven robbery footage is undoubtedly compelling, but how did “Myles T” acquire it? What’s the full story behind the video? Questions abound.