Famed motorcycle builder Jesse James—best known as the host of “Monster Garage” on Discovery Channel and the founder of West Coast Choppers—was on hand at SHOT Show this week representing his firearms company, Jesse James Firearms Unlimited (JJFU), and one of the models that turned heads at his booth was a 1911 custom-built for President Donald Trump. 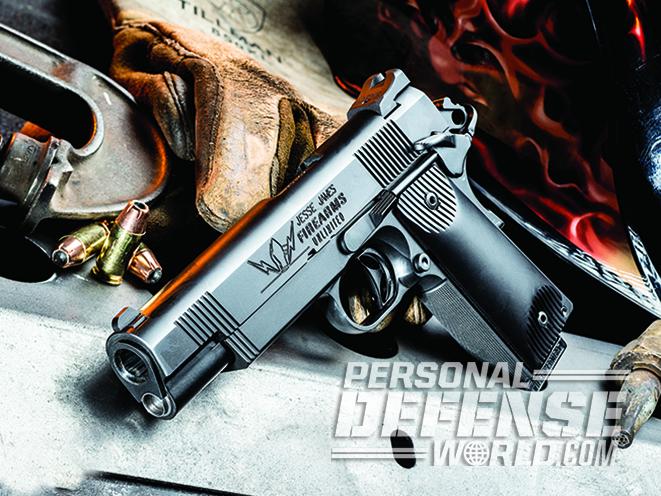 Chambered in .45 ACP, the Trump 1911 is based on JJFU’s Grand Master X model. In an interview with Maxim, James describes it in detail:

“It says ‘Donald J. Trump’ on one side, ’45th President of the United States Of America’ on the other,” James said. “It’s all relief engraved and 24-karat gold plate. The model is a JJFU Grand Master X. The handmade case is local Texas Pecan and Walnut. The box uses wood from one of George Washington’s original 13 Chestnut trees to inlay “DJT” and “45th” inside. It’s got a longer than normal 1911 frame and a two piece Slide & Compensator. When you cock it, the slide splits apart and goes back together in perfect alignment.”

James, who became friendly with Trump after appearing on “The Celebrity Apprentice,” said he decided to build the gun as soon as he realized Trump was going to win the presidential election.

“I wanted to really do something special. Even without the presidency, I wanted to do something that was a little on the flamboyant side,” James said. “Something that looks kinda badass, like a ‘Dirty Harry’ gun. Dirty Harry always had that long .44 Magnum. So it seemed kinda obvious that we should do a .45 caliber since he’s the 45th president, right?”

The plan is to sell the Trump 1911 to the man himself. James says that if he were to travel to the White House and present it to him as a “formal thing,” it would then become the property of the people and go into the presidential museum, “which I guess is cool for the gun because it’ll be on display, but I kinda think he should keep it and shoot it, because it’s an awesome gun.”