Testing 3 NAA Guardian Pistols to See Which One Shoots Best

Given the dramatic increase in attacks on law enforcement officers in the past few years, with most, if not all, being uniformed officers with a firearm at hand, why would any sane, responsible person go unarmed? The first rule in any gunfight is to have a gun. I’m not sure who coined this oft-repeated phrase, or any of the others bouncing around the Internet. Jeff Cooper, Mark Moritz and Clint Smith are among those accused of standing before a class and uttering it for the first time.

Even those who believe only a full-sized or compact version is the only handgun capable of effective self-defense will admit that an ultra-compact pocket gun is better than nothing at all. I believe that we shouldn’t denigrate handguns for self-defense just because they’re small enough to fit in a pocket or less traditional locations.

Rocky Mountain Arms was founded in 1972 to produce exquisitely made Lilliputian .22-caliber revolvers. These diminutive rimfire revolvers were, and still are, phenomenally popular. The company is now known as North American Arms (NAA), and in 1997, it added a semi-automatic pistol chambered in .32 ACP to its lineup. The gun followed in the steps of NAA’s mini-revolvers with stainless steel construction and extreme attention to detail. 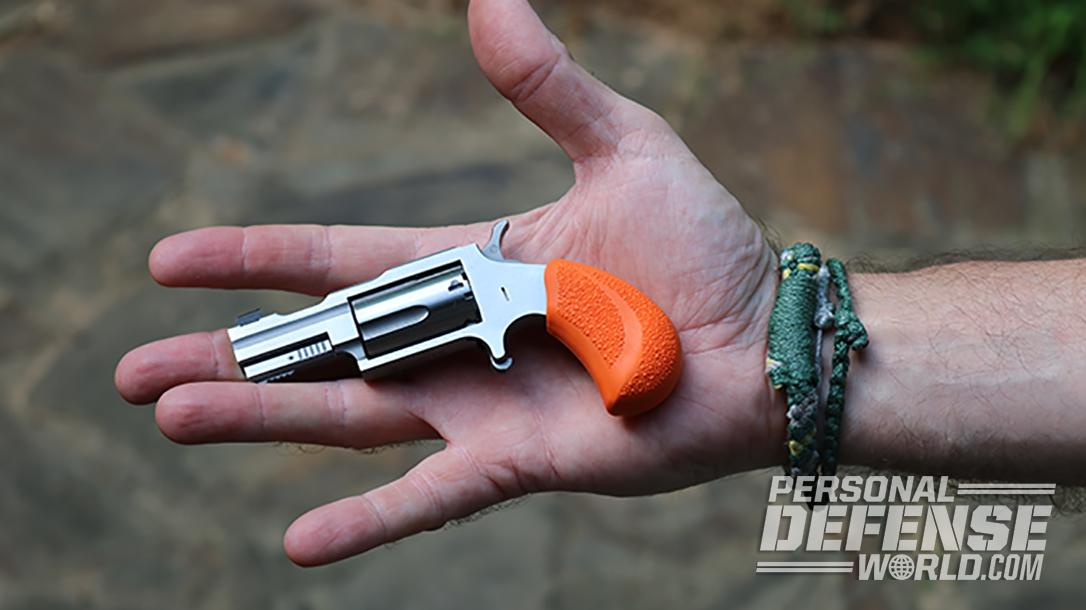 An updated version of the highly rated and popular Seecamp LWS in .32 ACP, the stainless steel NAA Guardian has all of the positive aspects one could want. A few years later, NAA began offering a slightly larger Guardian in .380 ACP, and more chamberings followed. All NAA Guardian pistols, including two versions handling the bottlenecked .25 and .32 NAA—cartridges based off the .32 and .380 ACP, respectively—are constructed of 17-4 stainless steel.

The investment-cast Guardian frames, built by a Ruger subsidiary, include the integral barrels. This allows Guardians to use a simple, straight-blowback operating system. And just like the frames, the slides are machined from a single stainless steel block with integral sights. Small parts like the magazine release, hammer and trigger are produced using the metal-injection molding (MIM) process.

Demand for these pistols is pretty high, so they’re fairly difficult to come by these days. Luckily, however, I was able to obtain three NAA Guardian pistols to compare in testing. My test samples were chambered in .32 ACP, .380 ACP and .32 NAA.

All three guns were put together very well and exhibited excellent finishes. And though they’re small, NAA Guardian pistols feel good in the hand. Their lines are clean and straight, and there were no sharp edges to dig into my hands or snag on the draw. Their grips are made of hard rubber with pebble-grain texturing, and they do a good job of helping to control recoil.

The double-action-only (DAO) triggers have long, heavy trigger pulls, but this is to provide a measure of safety, as there are no external safeties. The trigger pulls for the three test guns weighed between 10 and 10.8 pounds. Fortunately, the Guardian triggers are pretty smooth, making it easier to chase that last bit of accuracy.

Of course, the Guardians are really intended for reactive draws. The downsized defenders are designed to be pointed at the threat and fired. Taking time to search for those tiny sights during an emergency is a setup for failure.

Guardians also have their magazine releases in the standard location behind the triggerguard. This required me to slightly rotate the pistol in my short-fingered hand, just as I must with pistols from many manufacturers. Each pistol came with two 6-round magazines with highly polished exteriors and metal followers. The baseplates are made of black polymer, and they’re either flat or come with finger hooks.

Carrying the Guardians is simplified by the number of holsters NAA has on hand. The company’s rigs range from pocket to belt models as well as a carrying case known as the Universal Gun Rug that is equipped to carry a Guardian. A creature of habit, I chose a pocket holster to ride on my support side.

I only had one sample of ammunition available per pistol for testing. Fortunately, it was all from Hornady, which is currently the sole supplier of .32 NAA ammunition with its 80-grain Critical Defense FTX line. Another member of Hornady’s Critical Defense group is its 90-grain .380 ACP FTX loading. The .32 ACP ammo carries one of Hornady’s excellent hollow-point XTP bullets weighing 35 grains. In short, the Critical Defense and FTX loads are known for being excellent performers.

Drawing a Guardian from any holster is made easier by its snag-proof design. There are no sharp edges or external widgets to catch on a pocket or clothing, a product of the minimal sights. Working with targets placed at reasonable distances, I quickly acclimated to the Guardians’ DAO triggers and polished, exposed hammers riding flush with their slides.

The sights were another subject when firing groups. Rapid draws and firing were not hindered by the sights, even when raised to the eyes. At that point, I just looked over them. Swapping magazines was easiest done using the support hand to pull the magazine from the well and then go for the spare. The depleted magazines tend to wedge against the heel of my shooting hand, however. 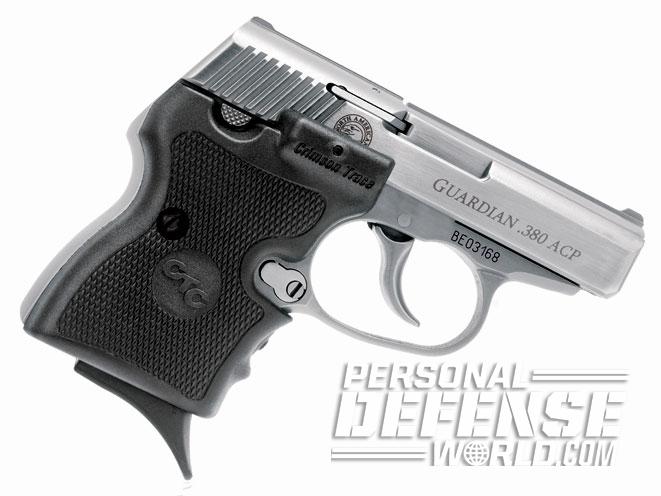 These pistols are designed for up close and personal use—generally within 7 yards. I set my chronograph up and went to work running rounds through the Guardians. Even though I had planned on just a 7-yard distance for the accuracy examination, I just had to see for myself what would happen at longer distances. While many of the hits from the Guardians were found on the targets, some weren’t. This means innocent bystanders could be in danger beyond 7 yards. So, keeping my shooting distance to 7 yards and under, every group averaged around 2.5 inches. This is more than accurate enough for belly-to-belly confrontations and out to 7 yards.

I prefer pistols like the NAA Guardian with flat-baseplate magazines, as there’s just one less chance of snagging during the draw. All three Guardians were controllable with the flat-baseplate magazines, even using Hornady’s modern high-performance ammunition. Compared to polymer-framed pistols, the weight of the Guardians is also helpful with recoil. However, I can see how the polymer finger hooks on the magazines could come in handy for many folks.

I was surprised to discover that the .380 ACP Guardian stoked with Hornady’s 90-grain Critical Defense FTX rounds displayed about the same recoil as the .32 NAA Guardian. Of course, I should have recognized that both cartridges have similar velocities, but the .380 ACP uses a bullet that is 10 grains heavier. The recoil was most noticeable when shooting from the bench, but who practices defensive shooting from the bench? When shots were fired off-hand, the three pistols seemed to have the same recoil.

Constructed of stainless steel, the NAA Guardian should be just right for pocket and IWB carry. It would likely be just as at home tucked in a pocket of an officer’s armor carrier during a sweltering summer. But I’ve got two pieces of advice. When you carry your Guardian (or any other handgun) in a pants pocket, use a holster. Also, always keep your keys and such out of that designated carry pocket. And a word to the wise: Stainless steel still rusts, just slower. I have seen the results of sweat accumulating without regular maintenance.

For those who carry a single handgun or two or three pistols, the NAA Guardian pistols are excellent choices. They are designed well with true DAO capabilities and simple operating procedures. And you get all of this with MSRPs in the $409 to $456 range.

Bullet weight measured in grains, velocity in fps by chronograph and accuracy in inches for best five-shot groups at 7 yards.