Smith & Wesson knocked the ball out of the park when it introduced the M&P Shield pistol in 2012. In less than three years, S&W announced that it had already produced more than 1 million of the pistols. That was two years ago. It’s anybody’s guess as to how many of the subcompact pistols have been produced now, but with the rebate program and the addition of the M&P45 Shield, the number has to be staggering. So just what makes the Shield so popular among concealed-carry users?

Let’s start with its dimensions. The grip frame is slightly less than an inch wide while the slide is just 0.93 inches thick. The gun is 4.4 inches tall, and with an overall length of just slightly more than 6 inches, the Shield is a gun that can be concealed without much effort. It weighs just more than 20 ounces with an unloaded magazine. That makes the polymer-framed gun comfortable for all-day carry.

Other things like its stainless steel barrel and slide, which are blackened with S&W’s Armornite finish, make the gun extremely corrosion resistant, and the low-profile three-dot sights and crisp, manageable trigger provide users with all the desirable features needed in a concealed carry gun. And, of course, the M&P Shield isn’t a gun that will require a second mortgage to obtain. In fact, it would be hard to find a gun that provides more value for the money. S&W found the formula for success, and it would be hard to improve on perfection. But the company has done just that.

S&W has just introduced the M&P Shield M2.0, and fortunately, it retains all of the features that made the original gun such a success and adds a few more. The M2.0 lineup also includes a new Shield that possesses an integral Crimson Trace laser, not unlike the S&W Bodyguard 380. Designated the M&P Shield M2.0 CT, the new addition is destined to become a favorite among the concealed-carry crowd. 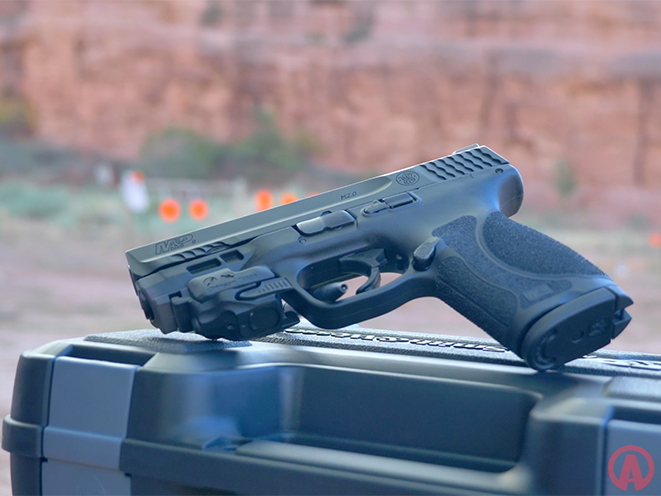 The new Shields have finer texturing on the front- and backstraps as well as the grip side panels. It is similar to what we see custom builders doing to polymer-framed guns. The texturing is like a fine emery cloth, and it should provide the shooter with a secure grip even with wet hands without being coarse enough to catch on layering garments. S&W even textures the eight-round magazine’s collar, which sits just above the basepad, to provide a consistent appearance.

Smith & Wesson has also machined forward cocking serrations into the front of the slide for those who like to press-check their pistols, and the “M2.0” legend is stamped onto the left rear side of the slide flat.

Engineers at S&W have also improved on the striker’s geometry. My personal S&W Shield, which I purchased over a year ago, has a very manageable trigger pull that breaks at about 6.75 pounds. But my two new M2.0 variants both have trigger pulls that break at a very crisp 5.25 pounds.

So what hasn’t changed? Quite a bit! In fact, magazines can be interchanged between both generations, and the slide’s sight dovetails are exactly the same so tritium sights developed for the original Shield will work with the M2.0. Holsters designed for the first-generation Shields will also work with the M2.0 pistols, except for the Shield with the integrated laser, of course. A Smith & Wesson executive informed me that dummy guns went out to holster manufacturers the last week of August, so hopefully there will be several holster options available by the time you get your hands on a Shield M2.0 CT. CrossBreed Holsters dropped everything to get me a sample of the SnapSlide OWB holster for the laser-equipped gun.

Last year, Smith & Wesson bought Crimson Trace, and it makes a world of sense to integrate a laser into the grip frame. The result is a gun that is not demonstrably heavier or really even bulkier than the non-laser model yet offers all of the benefits of a defensive gun with a laser-aiming device. The Shield M2.0 CT’s frame has bilateral red activation buttons. Pushing a button once will turn on the laser. Pushing the button again will activate the strobe effect, and pushing it a third time will turn the laser off. There are small holes on the right side of the frame and underneath to adjust the laser with an Allen wrench for windage and elevation. I like to adjust mine so the laser dot sits just above the front sight when the sights are aligned, and it took just a few seconds to make those adjustments.

Disassembly of the Shield M2.0 is quick and easy and requires no special tools other than a small screwdriver. Start by removing the magazine and clearing the chamber.

Once you have ensured the chamber is empty, pull the slide to the rear and lock it open by pushing up on the slide stop. You should be able to see the yellowish sear deactivation lever, located just under the ejector, through the ejection port. Use a screwdriver or similar device to gently push the lever down into the magazine well.

Now rotate the takedown lever 45 degrees clockwise, and then pull the slide to the rear slightly to disengage the slide stop and ease the slide forward off the frame. Turn the slide over in your hand and you’ll be able to remove the dual recoil spring assembly and guide as a single unit. The barrel can now be lifted from the slide.

When reassembling the gun, the sear deactivation lever must be protruding into the magazine well before installing the slide and barrel assembly onto the frame. Slide the slide/barrel assembly onto the frame and pull it rearward until you can engage the slide stop. Now rotate the takedown lever up, counterclockwise, until it is parallel with the slide. Let the slide go forward and insert an empty magazine. The magazine will return the sear deactivation lever to its normal position. Failure to do this will prevent the striker from setting and the gun will not fire.

Because the 9mm Shields I tested have short 3.1-inch barrels, I decided to run them both at 15 yards to measure their accuracy. Both guns shot nearly identical groups, so I have listed the best group for either gun in the accuracy chart. I fired all of the groups from my DOA Tactical portable bench utilizing a Millett BenchMaster for support. 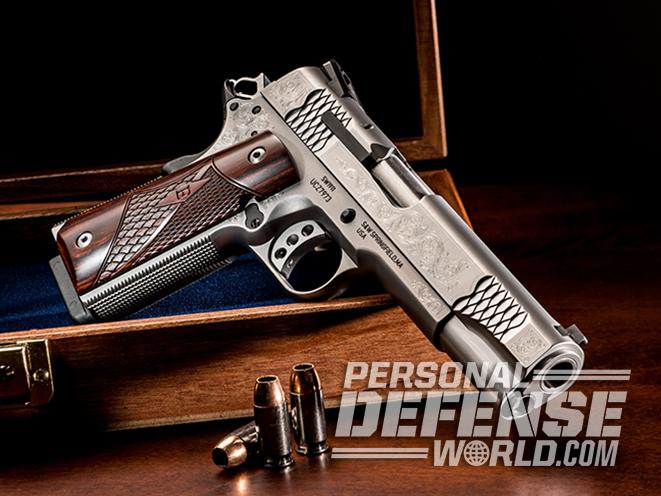 The results were very impressive. My best single five-shot group was fired through the Shield M2.0 without the laser with Black Hills’ 115-grain JHPs, and it measured just 0.51 inches. Federal Premium’s 150-grain Micro HST rounds produced a group just 0.86 inches wide through the laser-equipped Shield. Of course, the lighter and crisper trigger pulls were extremely helpful in producing these tight groups.

My next order of business was shooting double-taps to see just how controllable they are. Remember, they weigh slightly more than 20 ounces unloaded. I wanted to determine if I could shoot them rapidly with an acceptable level of accuracy. So I fired controlled pairs at my MGM BC-C Zone steel target at 15 yards and used a PACT electronic timer to measure my splits, or time between shots. My splits ran from a high of 0.35 seconds to a low of 0.27 seconds. The average came in right at 0.3 seconds. Each gun’s lighter trigger and short, positive reset made it possible to score decisive hits rapidly, and I was extremely happy with both guns’ performance at the range.

Both the first- and second-generation Shields possess a very comfortable 18-degree grip angle. It’s proven to be comfortable in recoil and also points naturally. I own smaller and lighter 9mm semi-autos, but I can’t shoot them as quickly or as accurately as I can a Shield. It’s always a tradeoff between size, weight and controllability with subcompact semi-autos, but S&W has found what appears to be the perfect compromise.

Approximately 200 rounds were put through each gun with no failures. I fired every bullet weight I had on hand, from 77-grain DoubleTap JHPs to Federal’s 150-grain HST bullets, and they all fed, fired, extracted and ejected flawlessly. All of the loads I tried had different overall lengths and bullet-nose profiles, and there wasn’t a single hiccup between the guns!

My test samples of the new M&P Shield M2.0 were both chambered in 9mm, though this gun will also soon be available in .40 S&W. Both of my guns possessed left-side thumb safeties, but S&W will also offer models without such safeties.

The MSRP for the standard M&P9 Shield M2.0 is $479, but I am certain you’ll find it for less at your local gun shop or online. What is really remarkable is that the laser-equipped Shield retails for just $20 more. I can think of many scenarios where a defensive handgun with an integral laser would be valuable. However, I can’t think of a single situation where having a laser at your disposal would be a handicap. If you were on the fence as to whether or not you should upgrade your first-generation M&P Shield with an M2.0 model, the price of the integrated laser should be all the push you need!