I’m not telling our readers something they didn’t already know when I say that some of the hottest items on today’s handgun market are .380 pistols. The reasons for this dramatic increase of interest in .380 pistols are threefold: materials, ballistics and CCW laws.

As more and more states have adopted “Shall Issue” CCW laws, the demand for small, lightweight handguns has skyrocketed. In the past, quality .380 ACP pistols like the Colt Model 1908 and Walther PP/PPK were all steel, thus they were heavy for the cartridge they fired. But today, the use of polymer frames has lightened them significantly, making them much easier to carry all day.

The .380 ACP (Automatic Colt Pistol) was designed by John Moses Browning and first chambered in Fabrique Nationale’s Model 1910 pistol. On this side of the pond, Colt, H&R, Remington and Savage Arms all offered .380 ACP pistols.

As originally loaded, the .380 ACP consisted of a straight-walled, rimless case 17mm in length topped with an FMJ bullet weighing 85 to 95 grains, traveling at approximately 900 to 1,000 fps. The use of improved propellants and high-tech JHP bullets has dramatically improved the on-target effectiveness of the .380 ACP cartridge, making it a much more practical choice for defensive purposes without any real increase in recoil.

We felt that it would be interesting if I assembled a selection of new-breed .380 pistols and ran them through a side-by-side shoot-off to see if any provided a significant advantage over the others. So I received a Ruger LCP II, Kahr CT380, Beretta Pico, S&W M&P Bodyguard 380 FDE and Remington RM380 to play with—I mean carefully evaluate in a professional manner. 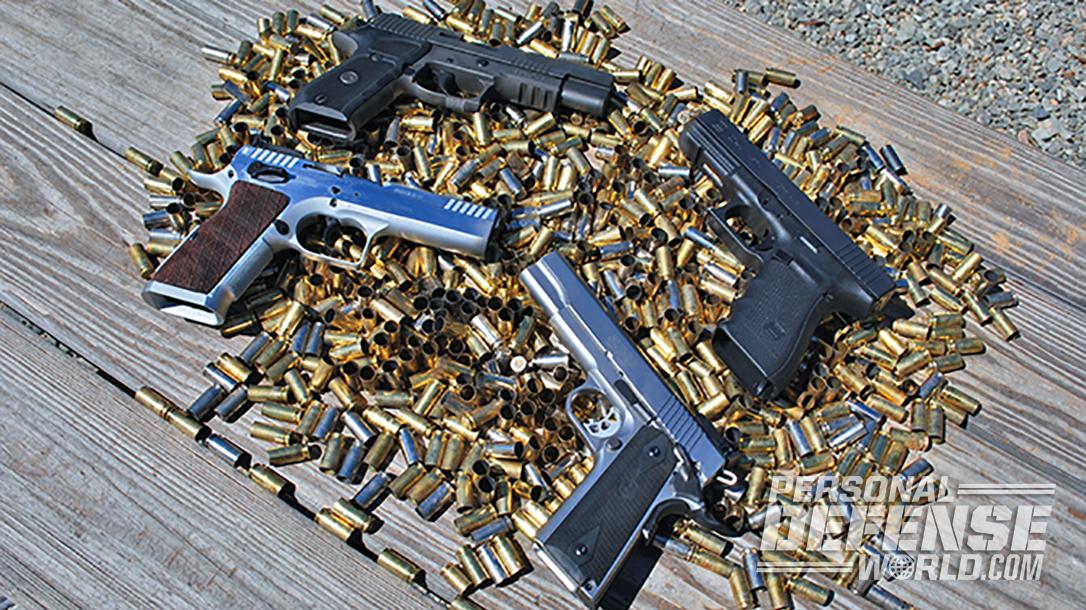 Our quintet of compact .380 pistols had a number of similarities and differences. All had steel slides and were locked-breech designs. Four utilized polymer frames while the Remington RM380 was the odd man out with an alloy frame.

Four had double-action-only (DAO) type triggers while the Ruger’s was of the single-action (SA) persuasion. The Beretta, Remington and S&W all had second-strike capabilities. While the Kahr is a striker-fired design, the other four all use hammers to ignite cartridges.

The Kahr, Beretta and Remington lacked external manual safeties while the S&W had a flush-mounted safety on the frame and the Ruger featured a paddle-type trigger block on the face of its trigger. Four of the pistols had magazine releases (ambidextrous in the case of the Remington) that were pushed in to release the magazine while the Beretta has an ambidextrous paddle under the triggerguard that is pushed down.

The sights on all five .380 pistols were basic: a blade front mated to a square-notch rear. The Beretta had three white dots while the Kahr featured a white-dot front and a white bar on the rear sight. The remaining three had plain black sights. It should be noted that S&W, Ruger and Kahr all offer versions of their pistols with integral laser sights as an option.

In terms of cartridge capacity, the Kahr uses a seven-round magazine while the magazines of the remaining four each hold a half-dozen cartridges. The Kahr also came fitted with a rubber grip sleeve that the company offers as an option.

Rules Of The Ring

I obtained the enthusiastic assistance of my good friends Dick Jones and Perry Windsor, both of whom are avid action pistol competitors and hold CCW licenses. As in earlier “Battle Royales,” it was decided that we would evaluate the pistols in eight areas: ergonomics, trigger control, recoil control, sights, offhand accuracy, ease of reloading, reliability and, considering their role in life, concealability. We felt these categories would give each of us a good overall feel for these compact autoloaders.

I believe that trying to shoot tight groups from a stationary rest with pistols of this class is a poor indication of how they perform. Instead, I decided to see how they would digest different types of ammunition. Accordingly, I ran two magazines each of Hornady 90-grain FTX, Winchester 95-grain Train & Defend, Black Hills 60-grain Honey Badger and Browning 95-grain BXP ammo through each pistol. I was pleased to see that all five pistols digested whatever I stuffed in their magazines and spat out the empty cases with metronome-like regularity.

As is the standard in these “Battle Royales,” I disassembled, cleaned and lubricated each pistol, which would be the only maintenance they would receive throughout the test. If one malfunctioned during testing, we would attempt to correct the problem and keep shooting.

Off-hand testing consisted of running three drills with IPSC targets kindly provided by the Target Barn set out at “real-life” distances of 3 and 5 yards considering the class of the pistols we were using. We used only a quantity of Bronze 90-grain FMJs from PMC for these practical range drills. Finally, the .380 pistols were carried and drawn from a reliable Galco Front Pocket Horsehide holster.

In the end, each shooter would be required to fire a minimum of 66 rounds from each pistol for a total of 330 rounds from all five of the test guns.

I met my friends at the Piedmont Handgunners range in Southmont, North Carolina, on a chilly, overcast November morning. After unpacking our gear and setting up the targets, we proceeded to send rounds downrange. One of us would fire a pistol while a second acted as a range officer and the third loaded magazines. Family responsibilities prevented my wife, Becky, from assisting us so my friend, Richard Cole, volunteered to serve as our photographer and score keeper.

As brass piled up on the tarp next to the shooters, it became obvious that these “little” pistols were capable of surprisingly good accuracy with some help from the shooters. In fact, of the more than 1,000 rounds we fired at the targets, very few impacted outside the targets’ A-zones and (when required) “heads.” While it must be admitted that the ranges were short, the triggers and sights on several of our test pistols were not conducive to fine shooting.

There was the usual moaning when I told them they could not pick up the spent brass (yes, some people do reload .380s) until we had finished the paperwork. Richard handed out score sheets and pens, and each of us graded the five pistols on the aforementioned criteria with a one being the poorest and five the highest score. These were then added together to give each pistol a final score in each category.

Early on, we experienced several early slide lock-backs and slow closures with the Kahr, which caused its score to suffer. But after an application of oil, it ran perfectly for the rest of the day. We had two failures to eject and one stovepipe jam with the Ruger and one failure to feed each with the S&W and Beretta while Remington’s pistol just kept chugging along. Considering they were all new out-of-the-box pistols, we considered this performance satisfactory.

The S&W, Kahr and Remington tied in this category because of their excellent “pointability.” The Ruger’s short grip frame counted against it slightly while the Beretta came in fifth place. Its smooth, narrow grip frame made shooting difficult while the slide stop lever and magazine release were both very difficult to operate. On the plus side, the large finger rest extensions on the Beretta magazines provided a full three-finger grip on the pistol. Note that the Kahr’s slide was very difficult to retract to chamber or clear a round, which would be problematic for someone with small or weak hands. 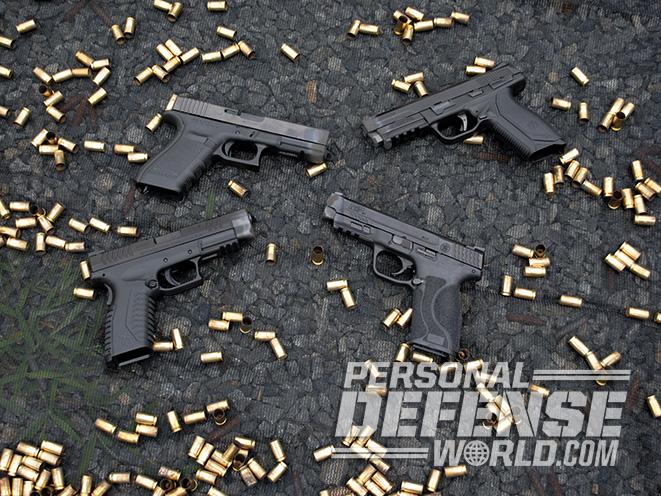 The Remington and S&W both had smooth, stage-free trigger strokes while the Ruger’s single-action trigger was liked by all. Two of the shooters felt the Kahr’s trigger stroke was heavy and a bit gritty, while all three of us agreed that the Beretta’s was long with a heavy let-off.

The Remington finished first in this category thanks to its wide grip frame and weight. The Kahr was the runner-up thanks to its long grip and rubber sleeve. The S&W’s finger rest magazine basepad allowed a firm purchase, but the Ruger’s smallish, narrow grip was not conducive to rapid fire. All of us felt the Beretta’s grip frame was too narrow, and its lack of any type of checkering/texturing allowed it to move around in the shooter’s hand under recoil, forcing each of us to reacquire a firm purchase every few shots.

Considering the distances we were shooting at, the sights weren’t a major factor. That being said, all three of us agreed that the Kahr’s bar-dot sights were the fastest to align and provided the best sight picture. The Beretta’s three-dot sights were high, easy to acquire and allowed fast transition between targets.

All five .380 pistols showed they were capable of reliably putting rounds where the shooter wanted them fairly quickly.

Let me say right off that it is highly unlikely that the shooter will have to perform a speed reload with this class of pistol. That being said, the magazine releases on the Remington, S&W and Ruger all worked easily, and their magazines fell free, partially loaded or empty, slide forward or locked back. The Kahr’s magazine release was difficult to access, and its magazines did not always fall free and had to be manually started or pulled out. The paddle-type release on the Beretta was difficult to access and awkward to manipulate and, as with the Kahr, magazines sometimes had to be manually extracted. The Beretta’s magazines were quite difficult to fully load. Maybe a loading tool would be a nice option?

While all of the test guns were small enough to conceal easily, the size and narrow widths of the Beretta and Ruger gave them perfect scores in this category with the S&W coming one point behind the pair. The Kahr’s long grip sometimes made it a difficult to draw from a pocket holster while the Remington’s width created a bit of a signature.

As I normally do at these “Battle Royale” shoot-offs, I queried Perry and Dick about their choice as to the pistol with the best handling qualities and which one they would choose to carry on a regular basis. I believe the readers will find our answers interesting.

Well, there you have it. My two fellow shooters and I agreed that the most important features of this class of pistol are reliability, accuracy and concealability, and all five of these .380 pistols provide that. The other features will depend on what the individual shooter prefers or needs.