Heckler & Koch has announced that Crimson Trace Laserguards are now available for all of its VP models. In addition, the company has added new color frame models to its VP9SK subcompact series. 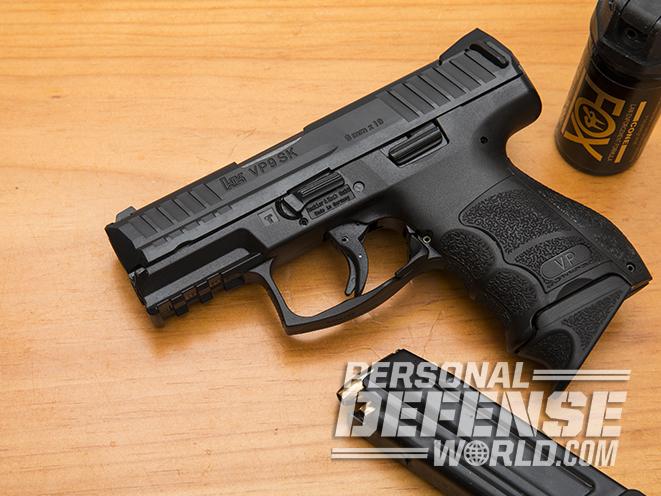 The Laserguard LG-499 (red) and LG-499G (green) laser sights attach firmly and securely to the trigger guard and lower accessory rail of HK’s VP9, VP40 and VP9SK guns. The sights feature Crimson Trace’s “instinctive activation” technology, meaning the unit springs to life with a normal firing grip. The LG-499 features a a 5mW peak, 620-670nm, Class 3R red laser beam, while the LG-499G sports a 5mW peak, 515-532nm, Class 3R  green laser beam. The LG-499G has a master on/off switch for completely powering down the unit. Both models feature a front activation button, can be installed in minutes and are adjustable for windage and elevation.

“Adding Crimson Trace models to the VP series is a landmark of sorts for us. It means the HK VP is now firmly established as one of the dominant handguns in today’s market,” Bill Dermody, Heckler & Koch’s marketing director, said in the press release. “Crimson Trace is a recognized market leader for compact laser sights and their involvement with the HK line means another high quality accessory is accessible to VP shooters. It’s another example of our commitment to customer driven product improvements.”

In response to customer demand, HK has also added flat dark earth, grey and NATO green color frames—which are already available on VP models—to the VP9SK lineup. The company says its color frames “cannot fade or chip and are unaffected by chemicals, sun, and exposure to the elements.”