Something amazing happened at the 2017 SHOT Show. On the evening of Jan. 16, the American Pistolsmiths Guild (APG) inducted its newest members. Five talented gunsmiths from Nighthawk Custom were inducted into this prestigious organization. To my knowledge, having five gunsmiths from a single company instated at the same time has never happened before. This year, that honor was awarded to Shawn Armstrong, Bryan Cheney, Steven Cox, Travis Gregory and Allen Wyatt. In addition, Mark Stone, Nighthawk’s CEO, was inducted as an associate member of the Guild. To understand the significance of this honor, the Guild has only 66 current members in good standing.

The APG was founded in 1977 by 11 of the best gunsmiths in the country to “promote a standard for quality, honesty and workmanship in pistolsmithing by ascertaining the competency of anyone before they are recognized and admitted to the Pistolsmiths Guild.” To be admitted into the Guild, a pistolsmith must build two guns for submission. To quote the APG website, “the Guild sets the gold standards for work, products and business procedures as each member has gone through the rigorous grading, scrutiny, observation and critical examination in order to become a member.” To be sealed by the Guild is a lifetime honor.

I was able to visit Nighthawk’s facility, in Berryville, Arkansas, right before SHOT and got a sneak peek into what these amazing gentlemen were building. All were excited, and a little nervous, about the final judging of their work. One of the gunsmiths I met was Bryan Cheney. I was impressed by his enthusiasm, creativity and insatiable drive for perfection. Bryan had designed a very unique and creative 1911 as one of his Guild guns. It was different enough that I asked Mark Stone if I could get first crack at it for an evaluation.

To appreciate the gun, you first must appreciate the pistolsmith. Bryan is 28 years old and has already been at Nighthawk for nine years. His story is one of determination and purpose. Mark Stone hired Bryan to start in the prep department where he learned the basics of the 1911. In Bryan’s words, “Seeing my peers work and the skills they had drove me to better myself in everything I did. My time in prep really shaped my future at Nighthawk.” As would be a pattern, Bryan was determined to be the best at what he did. His hard work paid off and, after three years in the prep department, Bryan was offered a position in the build department.

On the Cutting Edge

What makes Nighthawk unique is its “one pistol, one pistolsmith” concept, something Mark Stone introduced several years ago. It was not an easy undertaking, as it took a lot of time and resources to implement and get right. According to Bryan, “When I started, I soon realized that in order to build a pistol, I needed a combination of many skills, including hand filing, manual machining, welding and an understanding of general metallurgy. I had decent welding skills, and my hand skills were getting better by the day, but machining was new to me.” 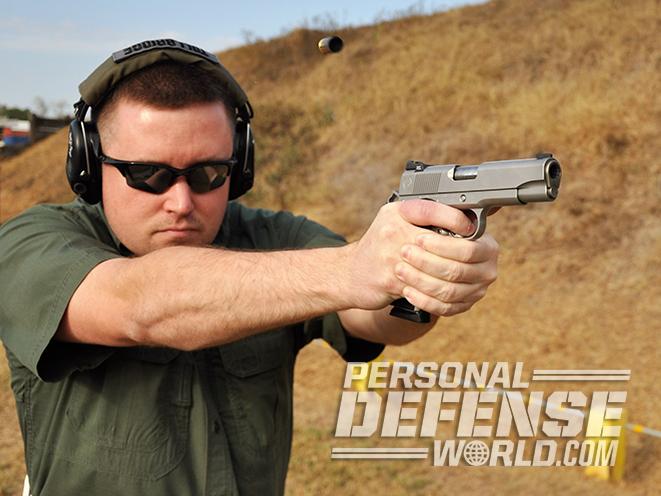 One of the things that Stone did was bring in some of the best gunsmiths to evaluate the quality of Nighthawk pistols and mentor the gunsmiths. This included Richard Heinie, Bob Marvel and Bill Laughridge. Heinie and Marvel both have had a close relationship with Nighthawk and have collaborated on signature models. Bryan had an opportunity to learn from these masters. The time was well spent. He was mentored in-house by Shawn Armstrong, who helped Bryan start on the right foot.

In the build department, competiveness was driven by both quality and the production demands to fill orders. Armstrong continued to mentor Bryan and realized how much potential he had. But there was one problem: Bryan needed to slow down to refine his work. Bryan remembers the conversation. “I took his advice seriously and I started to slow down and focus on making my bevels even straighter, taking my surfaces to a higher polish, and double and triple checking the fit and function of the build.” It was this attention to detail that resulted in Bryan being assigned to build the first Nighthawk Bob Marvel model. Over the next several years, Bryan was involved in a number of special projects, including Nighthawk’s customized Browning Hi-Powers.

In 2016, with the support of Richard Heinie, Bryan, along with the other four gunsmiths, set out to build two uniquely custom pistols to submit to the American Pistolsmiths Guild. The pistols had to reflect each gunsmith’s vision, creativity and attention to detail. Each pistol would be examined “under a microscope” for fit, machining and finish.

Now the pressure was on for Bryan to design and execute his vision for a clean and unique signature pistol. So, he elected to start with a tri-cut Commander slide that he had used on several other builds. Five wide cocking serrations were machined at a 15-degree angle to provide a positive gripping surface. The spacing and angle were also visually attractive and blended with the overall theme. Dual ports were machined on each side of the slide, at the same 15-degree angle, and merged with relief cuts to serve as forward cocking serrations.

The ports tastefully show off the match-grade, stainless steel bull barrel, which has a deeply recessed crown flush-cut with the end of the slide. A full-length guide rod and bowtie plug keep the front of the slide very clean. In keeping with the theme, the slide was left void of all markings, and the sights include a tritium front and a Heinie Straight Edge Ledge rear unit.

The full-sized frame includes the new high-cut frontstrap that is standard on all new Nighthawk pistols. Bryan used the standard machined beaver-
tail grip safety, thumb safety and slide stop on the Tri-Cut. In keeping with an edgy design, he also selected a flat aluminum trigger. The magazine release was beveled at an angle to provide a more positive surface. Finally, the pistol’s frontstrap and mainspring housing received the same tri-cut treatment as the slide.

During the build, Bryan came up with a new stippling pattern and process. The pattern was described to me as resembling the flow of water in a river. This new pattern was first applied to the top ridge of the slide, the bottom of the slide stop, the magazine release and the face of the flat trigger. In addition, the stippling treatment was applied on the frontstrap and carried continuously to the base of the underside of the triggerguard. The entire pistol was then dehorned and finished in an attractive black nitride finish. The final touches were the thin tri-cut aluminum stocks.

The pistol I received is the production model of the Tri-Cut Carry. The pistol immediately reminded me of the F-117 stealth fighter. With its sharp angles and black nitride finish, the pistol seemed to absorb light and presented an all-business pistol built as a fighting gun. The fit and finish, both inside and out, was clean and free from flaws. As with other Nighthawk Custom pistols, the frame-to-slide fit was almost seamless and had a “glass on glass” feel. Also, being a 9mm, the Tri-Cut has a reduced-strength recoil spring, making the slide easier to operate. This is a significant benefit for some shooters.

The faceted tri-cut frontstrap and mainspring housing, combined with the tri-cut stocks, give the pistol a different feel in the hand. Most of those who handled and shot the Tri-Cut Carry were complementary of the contours and feel of the pistol. The large angled flats on the leading edge of the stocks worked well with the tri-cuts. The trigger on our test pistol also broke cleanly, averaging 4.3 pounds.

On the range, we broke in the Tri-Cut Carry with Federal’s new American Eagle Syntech ammunition—a new training load that features a polymer-coated bullet to eliminate copper and lead fouling. The round also has a lead-free primer formulation and clean-burning propellants to minimize powder fouling and debris. The 115-grain Syntech load was 100-percent reliable and averaged 1,097 fps. When shot off-hand at 25 yards, the Syntech load produced a 1.75-inch group. I quickly became a fan of this new load and look forward to using it on future projects. 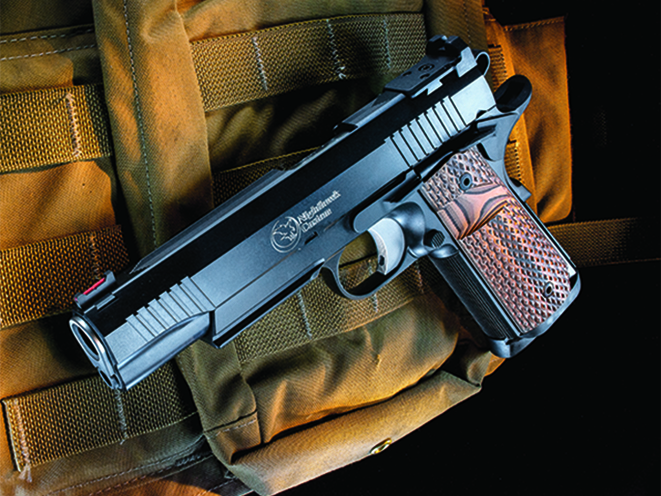 For the rest of the evaluation, I selected three premium loads that ranged from 90 to 124 grains from Federal, Gorilla Ammunition and Super Vel. The Tri-Cut Carry ate every load we fed it without a single bobble or malfunction. On the range, I appreciated the pistol’s sights as well as its well-designed controls. The arched slide release and rounded safety were easy to engage without being obtrusive. As with other Nighthawk pistols I have evaluated, the fit of the beavertail was seamless and blended to the frame. Without being overly critical, it was hard to find anything on the Tri-Cut Carry that I didn’t like or would change.

It is always a risk for a company to step away from tried-and-true designs. But Mark Stone and Nighthawk Custom saw potential in Bryan Cheney’s vision. The end result is a new 1911 that reflects that vision as well as the pride of having Bryan inducted into the Guild. This is one very special pistol that represents far more than the sum of its parts. It represents the heart and soul of a 28-year-old gunsmith who had a goal.

Bryan would be the first to tell you that this would not have been possible without the support of many people. So, in part, the pistol is also a tribute to those who have encouraged, mentored and supported Bryan during this journey. That list includes the four other pistolsmiths who also shared the special night in Las Vegas with Bryan. Look for the Tri-Cut Carry and other new Nighthawk Custom models on your dealer’s shelves.