The 2016 election surprised a lot of people, myself included. Eight years of the Obama administration had stymied innovation in the firearms industry. What incentive did manufacturers have to develop new products when they had problems keeping up with their orders? The constant threat of new regulations and gun control fanned the flames of fear and kept demand high. That all changed with a gun-friendly president in the White House. Many gun companies built inventory in anticipation of a Clinton victory and now the market is over supplied with low demand. The firearms industry badly needs new and different products to maintain consumer interest.

SHOT Show 2018, held in Las Vegas, is an industry only convention where firearms industry members come together to view the latest products from manufacturers eager to carve out a portion of market share. After spending three days walking mile after mile and fighting the throngs of other attendees to get a view of the latest products, I found five new firearms that piqued my interest.

In my opinion, these guns possess the innovation required to overcome consumer malaise and reignite interest and sales in the firearms community! 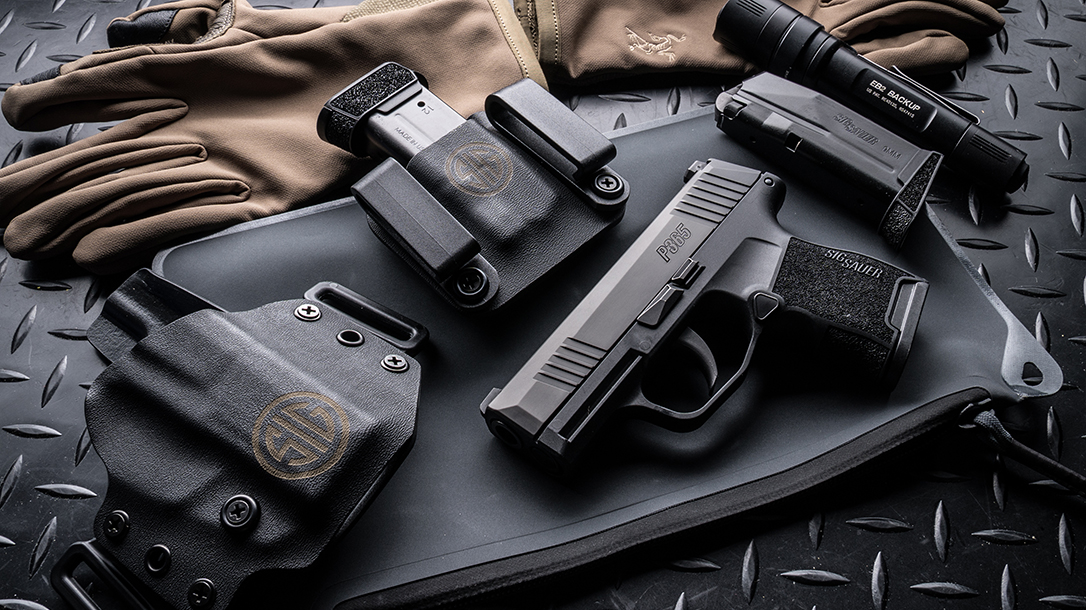 For the last couple years, Smith & Wesson has dominated the concealed carry market with its popular Shield lineup. The economically priced, striker-fired, single-stack subcompact offers concealed carry users a very accurate and controllable gun with trim dimensions and good ergonomics. It also offers 7+1 capacity with the flush fitting magazine or 8+1 capacity with the extended mag for guns chambered in 9mm. It’s easy to see why so many shooters would choose it. But Sig is going to give Smith & Wesson a run for its money.

The P365 is a polymer-framed, striker-fired gun with dimensions slimmer than the Shield. However, the really big selling point of the P365 is its flush fit magazine with a 10 + 1 capacity. The extended magazine is capable of holding 12 rounds plus 1 in the pipe. That’s a 28-31 percent increase in capacity, depending on which magazine is used.

The P365 is rated for +P ammo and possesses a remarkably crisp and clean trigger. It is lighter than the Shield and comes with Siglite night sights. Though it’s about 25 percent more expensive than the Shield, I expect sales of the Sig P365 to be brisk.

SHOT Show 2017 was abuzz with word of a new handgun said to combine the best attributes of the 1911 pistol and a striker-fired handgun. Called the H9, the gun was the creation of husband and wife team, Cy and Lauren Hudson. The new gun possessed a 15+1 capacity and a number of novel features. Like the Sig 320, the H9 has a removable trigger module that is serialized; meaning the module can be moved from frame to frame without buying another gun. Theoretically, the owner could have a series of frames varying in size, weight and composition with just one serialized part.

I have reviewed the H9 before. I can state categorically that it shoots flat and possesses less muzzle rise than any 9mm I have ever shot. This is due to the extreme low bore axis and the placement of the recoil spring in front of the trigger guard instead of directly under the barrel.

There were two major criticisms of the H9 and the Hudsons took them to heart. With an MSRP of $1,147, the gun was priced out of the reach of most shooters. The other sore point was the gun was just too heavy with its steel frame at 34 ounces.

At SHOT Show 2018 the Hudsons introduced the H9A. The new model is an aluminum-framed version of their gun that weighs a half-pound less than the original H9. Priced at $950, it should be more in line with the budgets of serious enthusiasts and armed citizens.

Realizing the last thing the shooting community needed was another AR-style rifle, Ruger engineers set about designing a completely new pistol caliber carbine. About a month-and-a-half before SHOT Show 2018, myself and nine other writers got a chance to spend an entire day shooting the new Ruger PC Carbine at Gunsite Academy.

Chambered in 9mm, the gun features a take-down system not unlike Ruger’s popular 10/22 take-down rifle. Ruger ships the gun with two different magazine well modules to accommodate both Ruger and Glock magazines.

The carbine uses a modified blowback system and utilizes a tungsten dead blow weight in the bolt to reduce recoil and muzzle rise. Its 16-inch fluted barrel is threaded ½”-28 for use with suppressors. The receiver top has a piece of Picatinny rail for optics use. There is also a blade front sight and a ghost ring rear sight, adjustable for windage and elevation.

It’s a versatile gun. The charging handle can be switched from the right side to the left and the magazine release can also be reversed, making the gun fully ambidextrous. Its glass filled nylon stock is adjustable for length of pull by using spacers and capped with a soft rubber buttpad.

We sighted our test guns in at 50 yards. I fired a five-shot group that measured about 1.5 inches, using Hornady’s 115-grain Critical Defense ammunition, from the prone position. We each fired at least 500 rounds through our carbines that day and not one of us had a stoppage or malfunction.

Ruger’s new Pistol Caliber Carbine offers a great deal for the money. It should be appealing to those looking for a truck gun, home defense or competition rifle. 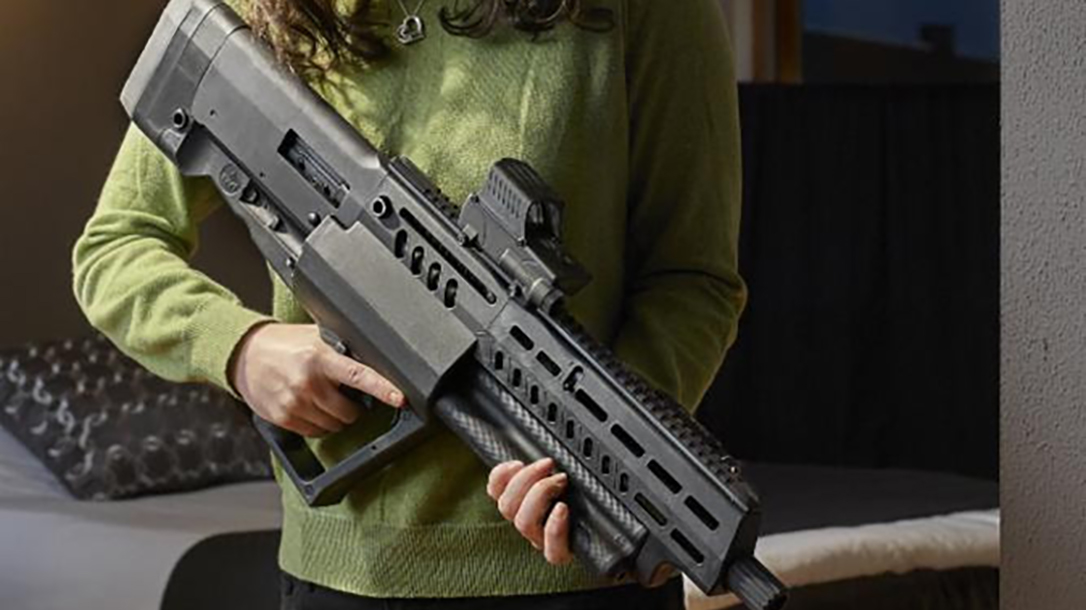 Five years ago Israeli Weapons Industries (IWI) rocked the U.S. market when it introduced its Tavor. The short overall length of the bullpup semi-auto 5.56 NATO carbine made it instantly popular with those who wanted the compactness of an SBR without the hassle of getting a tax stamp.

Building on that success, IWI US used SHOT Show 2018 to introduce its brand new Tavor TS-12.

Tavor’s new bullpup boasts a capacity of 15+1. The semi-auto shotgun fires from one of three different magazine tubes and has an adjustable gas system that will work with a broad range of shells.

IWI cut the 18.5-inch barrel with a 3-inch chamber and capacity will vary depending on the length of the shell. Each magazine tube is capable of holding five 2.75-inch shells or four 3-inch shells. Its barrel is threaded to accept Benelli and Beretta choke tubes.

The shotgun possesses a full-length Picatinny rail top along with M-LOK receptacles on each side of the forearm for mounting an array of accessories. Measuring less than 29 inches in length, the Tavor TS12 weighs a hefty 8 pounds unloaded. The gun can be loaded from either side and the ejection can be switched from right to left, so it is fully ambidextrous. Its safety is of crossbolt design.

With its snubnose length and abundant capacity, the Tavor TS12 will be a popular bedside companion and perfect medicine for those things that go bump in the night.

Days before the start of the SHOT Show 2018 I received an email release from Franklin Armory. It featured a picture of what appeared to be a short barreled AR rifle. Called the Reformation, Franklin claimed it was not subject to NFA rules and did not require a tax stamp to own.

Known primarily for its binary trigger, which fires a shot with the pull of the trigger and another when the trigger is released, Franklin’s Reformation is clearly another result of thinking outside the box.

When the show opened the first day, I was with a crowd of other curious people trying to find out how this weapon — with an 11.5-inch top and collapsing stock — could be sold without a tax stamp.

The ATF determined that the Reformation is a “firearm,” not a rifle nor a shotgun. The secret to the gun is Franklin Armory’s NRS (“Not a Rifle or Shotgun”) rifling. It has lands and grooves like conventional rifling, but no twist.

Despite the lack of stabilizing twist, Franklin Armory still claims the Reformation will shoot 4 MOA. Many don’t see this as a problem. Because of the gun’s short length it would make a handy home defense gun that would be utilized at very short range. But Franklin Armory is also developing football shaped projectile with stabilizing fins on the back end that they claim will produce MOA accuracy.

If you’re looking for a shorty AR without filling out reams of paperwork and all the associated government intrusion, check out the Reformation.