A shotgun-wielding armed robber is in the hospital recovering from multiple gunshot wounds after getting into a gunfight with an armed mother and daughter at a Tulsa liquor store late last week. Watch the intense footage of the attempted robbery above.

It all went down on Thursday night when a man walked into Forest Acres Liquor carrying a sawed-off shotgun and demanded money from the register. The video shows him pointing a shotgun at Tina Ring, 53, and her daughter, Ashley Lee, 30. Lee complies with the order, opening the register and putting her hands up while the suspect grabs the money.

The CCTV footage shows the suspect walking away, seemingly leaving the store. But he quickly re-appears in the frame after Lee reaches under the counter and hands a pistol to her mother. He approaches the two women.

“All I was thinking was ‘Just give him the money and go,’ and next thing I know, I see him back in my face,” Ring told Tulsa World.

That’s when Ring opened fire and shot the suspect. In the video, the suspect is seeing taking off immediately afterward. Ring then runs out from behind the counter and fires off two more rounds. But the suspect manages to re-enter the store. A physical struggle ensues when he tries to grab Ring’s gun away from her. During the struggle, Lee grabbed her own gun from under the counter and shot at the suspect.

The suspect eventually manages to get control of Ring’s gun. He then pistol whips her and points the gun at Lee. But Lee shoots him again.

With the suspect injured, Lee and Ring run out of the Tulsa liquor store. The suspect then follows suit and the video ends.

The suspect—later identified as 36-year-old Tyrone Lee—managed to flee the scene before police arrived, but he was eventually arrested after showing up at a local hospital with multiple gunshot wounds. He is currently in critical condition but is expected to survive. He’ll have numerous charges waiting for him when he gets out of the hospital.

Police believe Tyrone Lee to be responsible for multiple armed robberies in Tulsa and Tulsa County using a sawed-off shotgun over the past few weeks.

Ring was treated for non-life-threatening injuries but is recovering.

“I think I’m still in shock,” Ring said. “I don’t think I have really processed everything yet.” 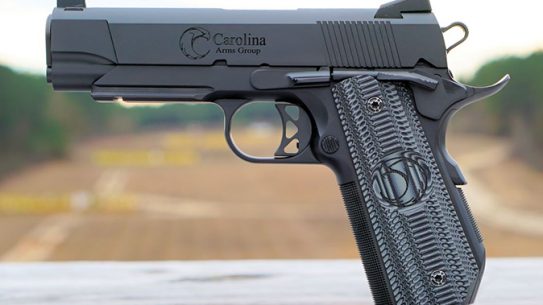