For the everyday citizen, acquiring and then shooting personal firearms should not only be educational and preparative for possible self-defense scenarios, but it should also be fun. And why not? Too often we find ourselves being too serious about having or using our firearms that we often lose the joy behind it.

Angstadt Arms recently teamed up with Sharps Bros. to help a little in that regard. Much like the personal flair we like to put on other toys or collectibles, from pool cues to hot rods and even to walking sticks in our old age, these two companies are offering a little flair for a firearm that you’ll not find every day at the range. This latest item is Angstadt Arms’ Jack 9 pistol, and it’s something you’ll need to see up close to believe.

Angstadt Arms is a firearms manufacturer located in uptown Charlotte, North Carolina. In business for a little over three years, the company specializes in  AR-style firearms that operate with pistol-caliber ammunition, and it’s already enjoying good success with its products, even on an international level. 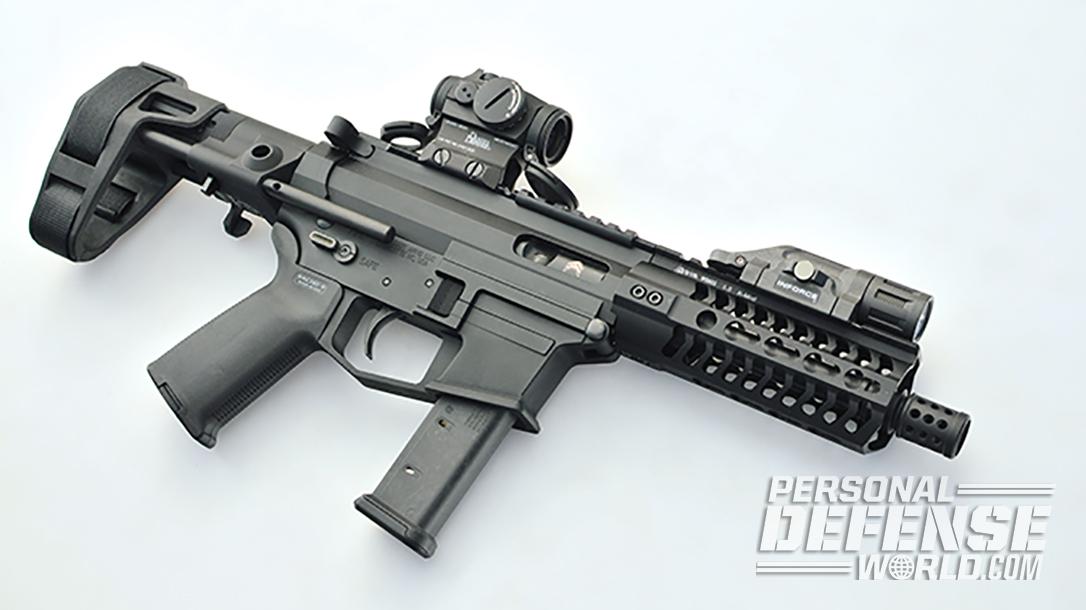 The company decided to use the AR platform for the basis of its products. These products are pistol-caliber rifles, pistols and personal-defense weapons (PDWs). The main twist here is that, aside from their build specifications and quality, these products are built around Glock pistol magazines—specifically 9mm models to start.

For those who want a little bit more of a hands-on approach, Angstadt Arms also offers parts for customers to build their own firearms if they choose. Additionally, as this article is being written, Angstadt is finalizing production on firearms that will also accept .45 ACP and 10mm Glock magazines as well. So it seems that the company’s products are seeing much success in the marketplace.

Rich Angstadt began his shooting career over two decades ago and has spent much of that time involved with competitive shooting. His decision to get into firearms manufacturing was a result of trying to build something that he wanted for himself. According to Angstadt, most 9mm carbines on the market weren’t purpose- built from the ground up to fire the 9mm. He felt they were cobbled together from various sources without any real adherence to standards or specs. He wanted to change that by building what he believed an AR-style 9mm carbine should be, and so it began.

The inspiration behind the Angstadt Jack 9 pistol came from the Jack 9 lower that was developed by Sharps Bros. As you can see, a skull is basically carved out of the front portion of the lower receiver. In fact, the magazine is inserted into a beveled well that is shaped to be the skull’s mouth and teeth. For those who like that type of thing, it’s a grim design that lets others know you’re serious about your work.

The Jack 9 lower receiver was originally designed for 5.56mm and 7.62mm ARs; the design was so well received that Angstadt Arms approached Sharps Bros. about making some for its pistol-caliber carbines. Once the deal was agreed upon, Angstadt provided the specs for its lower receivers. Sharps Bros. then constructed the receivers according to those specs while working in the Jack sculpting process. The end result is a fierce little receiver that has the same menacing profile as its larger counterparts.

The basic lower receivers produced by Sharps Bros. are constructed from 7075-T6 aluminum and sport a Type III hardcoat anodizing. The receivers are also designed so that the bolt will lock back after the last round is fired, and Sharps states that they’ll work with other 9mm uppers, though right now they’re currently only available through Angstadt Arms.

I was introduced to the Angstadt Jack 9 pistol at a get-together in Marion, North Carolina. Having an Angstadt carbine of my own, I had some familiarity with the company’s lineup, though not with this particular model. The Jack 9 is built on the UDP-9 foundation that is the basis for most of Angstadt’s products—unless you’re interested in a .357 SIG or .40 S&W model.

Like the lower, the upper receiver is made from 7075-T6 aluminum, and the handguard is a proprietary design with M-LOK slots for accessories. For furniture, the pistol sports a Magpul MOE-K2 grip and a Shockwave stabilizing brace for shooting the pistol one-handed. This brace is a 12-position affair that is stopped with a setscrew once positioned at the proper length. Also, the gun accepts double-stack 9mm Glock mags and comes with a 15-rounder.

For the shooting demonstration that day, the Angstadt folks also included a few items that they dressed the Jack 9 up with so we would get the full benefit of shooting the pistol. First up on deck was a Holosun HS503C red-dot sight in a Fortis Manufacturing mount. Though not part of the package, they turned out to be great additions at the range. Two more add-ons included SLR Rifleworks’ Synergy Mini Comp and a hand stop to ensure our support hands never slipped over the barrel. Finally, a Radian Weapons ambidextrous safety was installed to help take care of the lefties in the crowd.

Many people were quite excited when the Bureau of Alcohol, Tobacco, Firearms and Explosives (BATFE) issued a determination letter about the Shockwave stabilizing brace in April of 2017. Previously, the understanding was that if a person fired a pistol with such a brace against his or her shoulder, then that person will have essentially created a short-barreled rifle (SBR) subject to NFA regulations. While this “perspective” was rubbish, nobody wanted to run afoul of NFA laws because of the penalties involved.

This past April, however, the BATFE clarified that firing from the shoulder does not in itself redesign the firearm. Therefore, those who engaged in this activity would not be held accountable under NFA laws going forward. This seemed to be a great victory for those who were interested in this subject area and felt that holding the arm brace against the shoulder did not in fact redesignate the weapon.

Though this was good news, many people did happen to overlook other parts of the letter where the BATFE further clarified its decision about stabilizing braces. They stated that if someone took affirmative steps to alter the nature of the brace, such as permanently affixing the brace to act as a stock, or removing the strap and firing from the shoulder, those steps would redesign the nature of the weapon and make it an SBR. In short, leave the brace as it is when it comes out of the package. This includes the strap.

I sometimes find that the payoff isn’t worth getting an AR-style pistol because of its quirks, but that wasn’t the case with the Jack 9. Shooting from a bench at 25 yards and with the assistance of the Holosun red-dot sight, the accuracy results we got were exemplary. We shot a nice mix of premium loads, including Federal’s 147-grain +P and 124-grain HST rounds, Speer’s 124-grain +P Gold Dots and Sig Sauer’s 124-grain Elite V-Crown JHP offering. 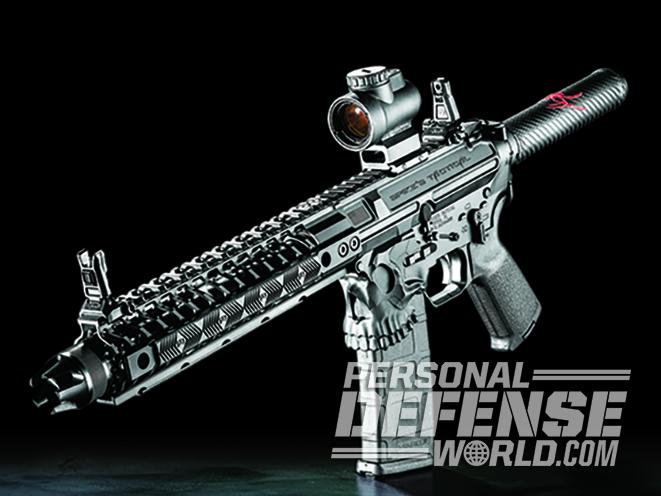 Sub-2-inch groups were acquired with three of the four loads. The single best group of the four was with the Federal 147-grain +P HST load, coming in at just 1.44 inches. The same load took the crown for the best average size group at 1.76 inches.

The Jack 9’s reliability was much like its accuracy—top shelf. During the shooting, there wasn’t a single malfunction with the different loads that we tried. This includes some Sig Sauer 124-grain FMJs during the plinking phase and while shooting at the steel targets.

The trigger on the Jack 9 broke at just 6.5 pounds. That’s certainly not a match trigger, but it’s light enough to not be unpleasant or interfere with accurate shot placement. We also found that the SLR Synergy Mini Comp did an excellent job of reducing the already moderate recoil of the 9mm pistol. Between the weight of the gun and the compensator, the Jack 9 barely budged while firing.

The Jack 9 pistol has a bit of a spooky flair to it, and with the skull sculpted into the receiver by Sharps Bros., it’s more than just a reminder of what awaits those who dare tread where no welcome awaits. I like the character the skull gives to the weapon and wouldn’t mind a little color thrown in to make it really visible. Hopefully that’ll be available in the future.

At $1,389, this isn’t a bargain-basement buy. But, as it’s noted quite often, you get what you pay for. Angstadt’s products, including this pistol, are top-quality items that were designed from the ground up to wrap around a Glock magazine to achieve the best performance possible. With my experience with the Jack 9 pistol and other models I have tried, I have no hesitation recommending the Jack 9 to those who want to add something wicked to their collection.

If marching to your own drummer is the way you roll, and you like the best, the Angstadt Arms Jack 9 should be at the very top of your list. It’s definitely a pistol that won’t come along every day.