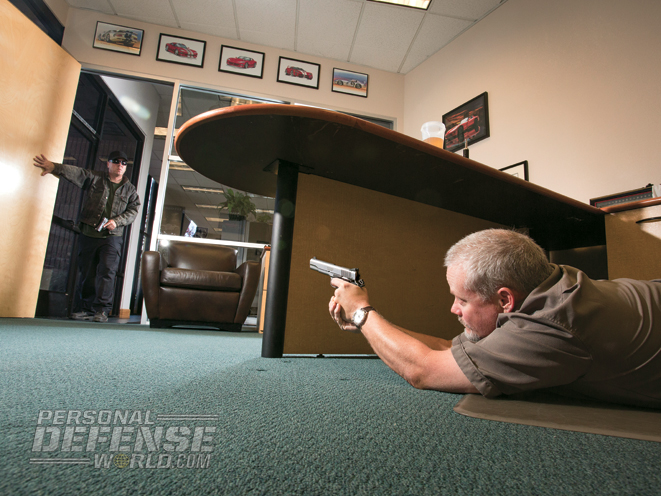 Workplace Violence: Defend and Escape an Active Shooter at the Office

The first part of the initiative—as outlined in a White House statement—calls for a “hardening” of schools in the United States. To that end, “specially qualified school personnel” who volunteer will receive firearms training. In addition, the Trump administration will “support” military veterans and LEOs transitioning into the education sector. Furthermore, a “See Something, Say Something”-style campaign will be adopted to encourage the reporting of suspicious behavior.

The next step involves “strengthening” background checks. Here, the Trump administration will call on every state to adopt Extreme Risk Protection Order laws. This would let police remove guns from a person who are labeled a “demonstrated threat” to themselves or others. Such people would also be temporarily barred from buying new guns. Meanwhile, Trump has signaled his support the Fix NICS Act. This bipartisan measure would make federal agencies more accountable to reporting accurate info to the NICS. It would also “incentivize” states to improve reporting to NICS.

Another measure Trump supports is the STOP School Violence Act, which would give grants for states to implement training and technology needed to help schools ID and stop violent acts.

Thirdly, Trump is calling for an “expansion and reform” of mental health programs. This includes more integration of mental health, primary care and family services, “as well as support for programs that utilize court-ordered treatment.” The goal here is to ID and treat those who are deemed a threat to themselves or others, the White House says.

The last part of Trump’s plan calls for the establishment of a Federal Commission on School Safety. The commission, chaired by Secretary of Education Betsy DeVos, will look at a bunch of different areas, including age restrictions for certain gun buys; entertainment rating systems and the “youth consumption of violent entertainment;” effects of press coverage of mass shootings; best practices for school buildings and campus security; the “effectiveness and appropriateness” of psychotropic meds for treating youth; improving access to mental health treatment and more.

In the days after the Parkland shooting, Trump had supported raising the age for rifle buys from 18 to 21. He appears to have walked that support back somewhat by instead making the idea an area of study for the commission. Here’s what Trump had to say about the issue on Twitter:

….On 18 to 21 Age Limits, watching court cases and rulings before acting. States are making this decision. Things are moving rapidly on this, but not much political support (to put it mildly).

Trump’s mention of “court cases” is likely a reference to the situation in Florida, where Gov. Rick Scott (R) signed a measure into law last Friday raising the minimum age for rifle and shotgun buys from 18 to 21. The NRA immediately filed a lawsuit in response.