by Stan Trzoniec
in Ammo, Gear
0

Trzoniec’s Colt Model 1911 chambered in .38 Super came complete with gunsmith-installed sights and a long trigger. Maple grips came from Colt when they were readily available from their Custom Shop. While they are back in business, only a few materials are listed for handgun grips today.

Everyone today seems to have a favorite handgun or cartridge. Some like the popularity of the famous Model 1911 in .45 ACP, others like the feel and heft of a large-framed revolver in .44 Magnum. A number of people seem to enjoy the mild report of the time tested .38 Special. My choice? The Colt Model 1911 chambered in .38 Super.

At the time I purchased the gun in the spring of 1981 I was involved in IPSC shooting. Like others in the fold, I enjoyed trying trying different guns and loads in an effort to become a Class A shooter. 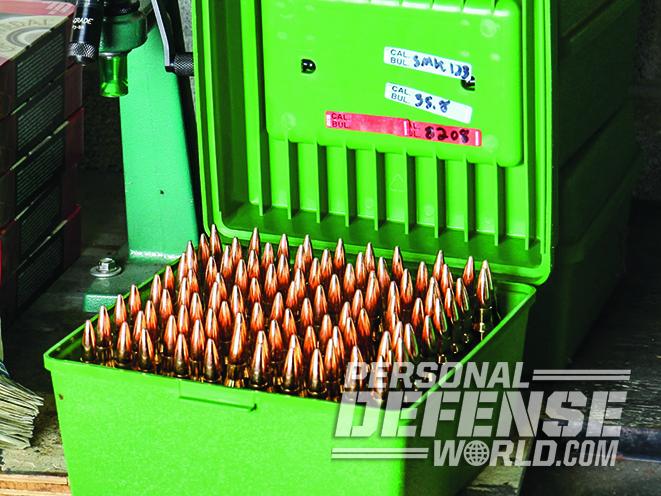 As mentioned, my gun of choice was a Colt with the Series 70 designation. Since Colt really did not do much to upgrade the basic Model 1911 chassis, this gun did have some major design features that now made it desirable to competitive shooters. Included was the new collet bushing, that, along with the slightly belled barrel, did help to improve accuracy.

A new firing pin design was also incorporated, and even though some gunsmiths were crying that it made it harder to give a decent trigger pull, I saw no problems with my gun when I sent it out to Dick Crawford in New York State for some work. Bo-Mar sights, a long trigger and some tweaking brought it down to a perfect three pounds.

At that time, the “power factor” for all IPSC matches was around 175, much too much for the .38 Super. Later, probably due to shooter demands, they lowered it to around 140, which was better. In some cases, it was still hard for the Super to make the goal. Some factory loads made the grade, but handloading was the way to go. I could do this by using a 124-grain bullet multiplied by 1,200 fps, then divided by 1,000. This came out to 149, which put me in the ballpark for competition. It wasn’t the caliber’s fault I remained in the Class B category, but I had fun during the time I was shooting in sanctioned matches.

Not to be confused with the .38 Auto (less power), the .38 Super was introduced in 1929 as a new force for law enforcement. While the .38 Super is not one of the most popular cartridges on the market even today, it is a pleasure to shoot, and most of all, handload with a variety of bullets and powders. Handloading cartridges like the 9mm, .38 Super, .40 Smith & Wesson and the traditional .45 ACP represent more of a challenge than the more common .38 Special, .44 Magnum and even the .45 Colt.

To ensure 100 percent reliability you have to invest more time and pride in getting things just right. Preparation, belling, loading, crimping and even taper crimping are needed to ensure dependability shot after shot.

The first thing you will want to consider is new brass. Sure, you might find some once-fired brass, but for the most part, new .38 Super brass will ensure the proper fitting to your gun time after time as well as consistency in loading. Ten boxes is a good place to start, checking the lot number on each box. Arriving home, dump at least half of the boxes on the table and inspect all for factory defects including those that may apply to the case mouth.

With the brass, purchase a good carbide die set from one of the major players in the industry. The carbide set frees you from the tedium of lubing, cleaning and tumbling the cases after sizing. In addition to the main set of dies, purchase a taper crimp die to get reliable feeding in your gun. RCBS’ new three-die set comes with the seating and taper crimper in one die.

After sizing, check the overall length of the case as it comes out of the die. Since modern .38 Supers headspace on the mouth, this measurement is very critical. You want the gun to return to battery after each shot, and if the case is too long, it can’t. Also, you don’t want to have the gun set itself up in a slam fire situation. For the record, the overall length of the case would be 0.900-inch. Inside dimensions are important, too. Out-of-the-box case measurements varied from 0.354- to 0.355-inch, and after running through the RCBS die, they measured 0.352-inch, which gives perfect tension for 0.355-inch diameter bullets.

Loading any auto pistol cartridge, I’ve found that belling (or expanding) the case should be done with great care before receiving any bullet. Granted, while the main purpose of this case expansion is to allow the bullet to glide down and into the case with a minimum of effort in the seating process, one must also take into account that the case mouth has to be turned in again to finish the loading sequence with a taper crimping die. This helps to allow the proper feeding of the bullet into the chamber while locking the bullet and case together to eliminate pressure problems when the bullet is driven deeper into the case during shooting.

Working the brass at this point in reloading can lead to split case mouths on more than a regular basis. With this in mind, you will want to keep the outside measurement of the flare (or belling) of the case at no more than 0.380- to 0.381-inch. Too much will eliminate the inside tension of the bullet in the case, and too little will lead to crushed case mouths. You can tell this is right simply because the bullet will actually “snap” into the case after the proper adjustment has been made. For convenience, I find that I can flare or bell the case on the upstroke of the ram, and prime on the down stroke while pushing in the primer feed.

When it comes to charging the cases, I take one powder like Bullseye and go down the list using this powder in all of my reloads. This works out well; when working with cartridges like the .38 Super, the differences in powder charges can go back and forth from a half- to a full-grain over the entire run. Then I go back to the top of the list, pick out the next powder, and do the same. This speeds up the process, allowing me to minutely adjust my measure to the various powders instead of constantly changing powders as I move through the various bullet weights. When I finish one load, I set the bullet, taper crimp the round, and put it into the right envelope for the range.

The rest of the components present no problems. There is no shortage of bullets for the Super, as common 0.355-inch bullets that fit the likes of the .380 ACP, 9mm or the .357 Sig work with aplomb. Faster powders like Winchester 231, Unique, Herco, Blue Dot and Herco are great, ensuring positive functioning of the weapon. Common small pistol primers give good ignition, and seating bullets to 1.180-inch for lighter bullets and 1.280-inch for heavier projectiles ensure flawless feeding. 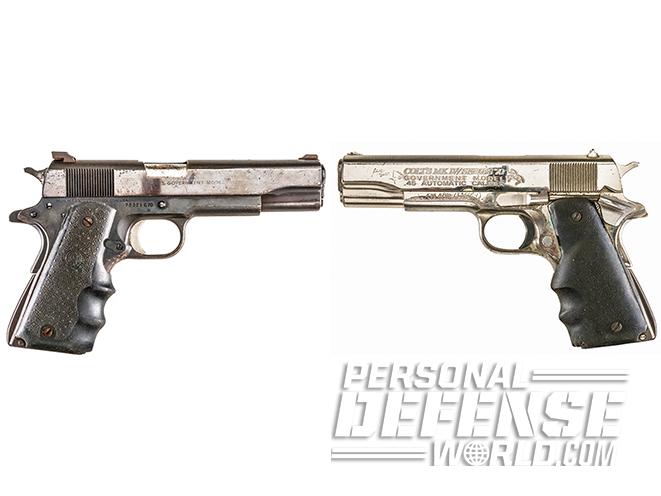 After many range sessions, I have listed some loads that are not only accurate but very consistent over time considering the Colt gun is factory, not a custom version. Over the years, I have played with the .38 Super in other guns. This includes Kimber, Wilson and Baer. But for my money, use and time, the Colt product suits me well. While Colt has not been in the forefront in handgun production lately, there are plenty of “pre-owned” guns on the secondary market for purchase. When testing various loads, I placed the gun into a Ransom Rest for steady shooting at 20 yards.

As you can see by the chart, the .38 Super exceeds most other cartridges in accuracy, velocity and the economics of powder. Even using just 5.0 grains will get you around 1,400 loads in a pound of Unique… about 0.015 cents per shot!

The .38 Super is still a great cartridge no matter what the critics say. Sure, recent cartridge additions may eclipse the Super, but for comfort, economy and just plain fun, look into the .38 Super Automatic cartridge.