A good samaritan donning a cowboy hat bravely took down an armed robber at a butcher shop in Mexico on Monday. Watch the CCTV footage above to see it all go down. 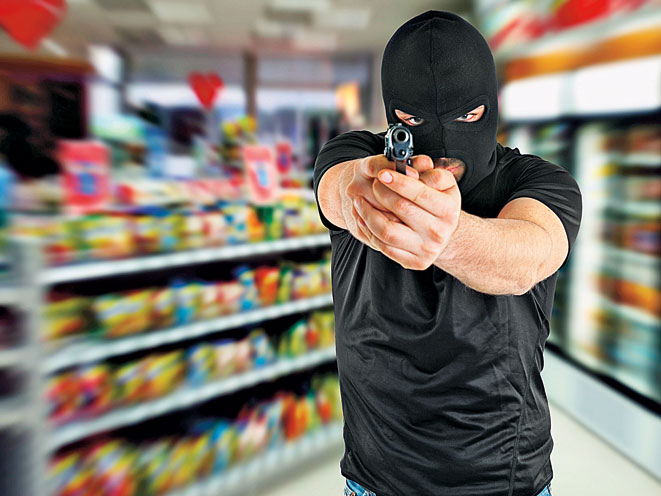 Fox News reports that the incident took place at Carnes Carnes butcher shop in Monterrey. The video starts off showing our hero in the cowboy hat standing at the register and a woman working behind it. Suddenly a young man in a dark hooded sweatshirt bursts in, draws a revolver and points it at the woman. There’s no audio, but he presumably tells her to empty the register. The suspect then points the revolver at the “cowboy” and—again, presumably—starts demanding money.

As this is all going on, another customer suddenly emerges from the back of the store. Distracted, the armed robber turns and points his revolver at her.

Seeing an opportunity, the man in the cowboy hat rushes at the suspect from behind. He manages to knock the gun out of the robber’s hand. A struggle ensues, during which the suspect pulls what looks appears to be a knife and starts waving it around.

The would-be robber tries to take off, but the good guy in the cowboy hat puts him into a chokehold and drags him to the back of the store, off camera.

Another store employee can be seen picking up the gun. Shortly thereafter, the suspect—who by this time was shirtless—tries again to bolt for the door. He nearly makes it out of the store, but a third employee grabs him by the neck, and the three men finally hold the suspect while the woman at the register calls the police.

The clip went viral after first appearing on Reddit. Several users noted the cool demeanor and quick-thinking of the man in the cowboy hat.

“Dudes got a cowboy hat, jean jacket, and a serious mustache. You don’t mess with him,” one user said.

“That cowboy hat stays square on that man’s head the entire time, amazing,” another user commented.

Fox says the suspect was taken into custody. The identities of the people involved have not been released. 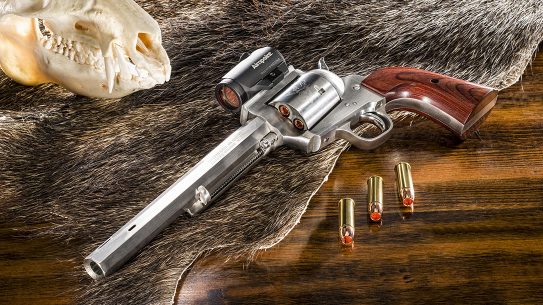 Nothing says liberty and independence like these two custom .454 Casull big bore revolvers...