Iver Johnson Arms’ Eagle XL sports a 6-inch barrel to help you get the most from your .45 ACP ammunition. The slide stop and thumb safety levers are also extended.

Mention Iver Johnson to someone of my age and background and the first thing that’ll pop into their mind is an “Owl’s Head” revolver in .32 or .38 S&W, with a small hinged frame and a nickel- plated finish. Those days are long gone, however. Today, Iver Johnson is known for offering high-quality 1911-style pistols and shotguns. 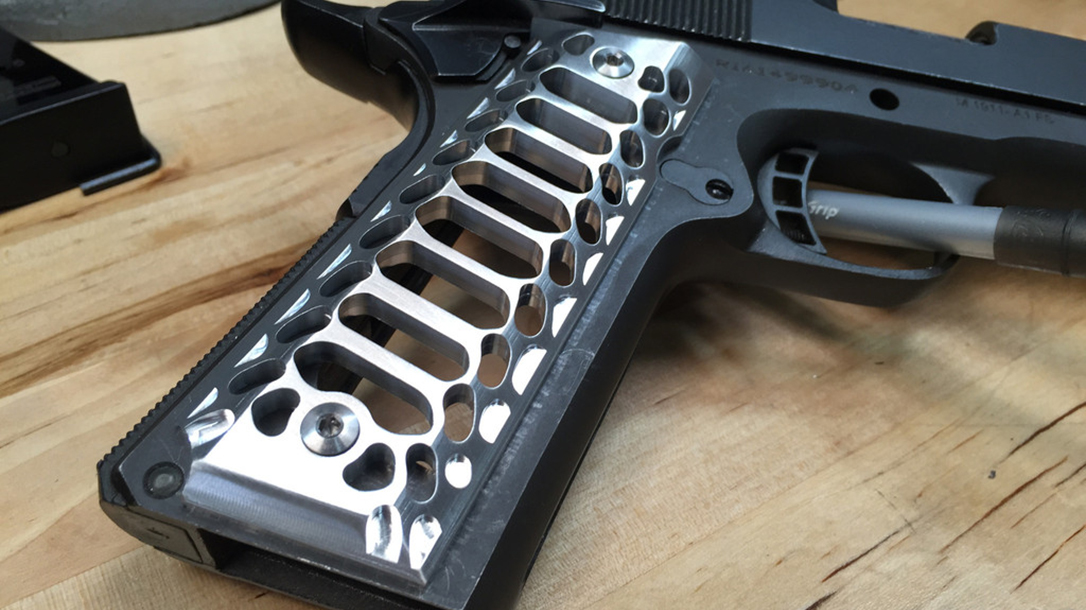 Based in Florida, the company imports its 1911 line from the Philippines while the long guns are Turkish-made. The 1911-style pistols come in full-sized, Commander and compact versions with a variety of options like adjustable or fixed sights, extended or “GI” controls, Cerakote and hydrographic finishes, wood or synthetic grips and tactical rails. I counted at least 18 versions in the company’s catalog.

In 2015, the company introduced a new model called the Eagle XL. Iver Johnson’s full-sized Eagle 1911 pistols have target/competition features like adjustable sights, extended safeties and slide releases as well as other “combat” features. What sets the Eagle XL apart is its long slide and 6-inch barrel.

My test Eagle XL came in a black plastic carrying case lined on the inside with foam rubber. A safety padlock and owner’s manual were included. The pistol itself has a very business-like appearance thanks to its matte blue finish; the only shiny part is the rear portion of the barrel, which is visible through the Eagle XL’s generously sized ejection port.

A cursory examination of the pistol’s exterior showed that a high degree of care was taken with the fit and finish. The wood-to-metal and metal-to-metal areas meshed perfectly, with no obvious machine marks or blemishes. The top of the extended slide is rounded, and the front sight and fully adjustable BoMar rear sight are affixed in dovetail cuts. The rear sight notch has a white outline around it, and the back of the sight is finely serrated.

The slide itself is serrated both front and rear with 19 closely spaced serrations on each end. The forged slide and cast frame are both CNC-machined and hand-fitted for top-notch accuracy right out of the box. The 6-inch barrel has conventional rifling and comes with a solid barrel bushing; the recoil spring, guide and plug are strictly GI. All of Iver Johnson’s 1911 pistols are “Series 70” based.

The hammer on the Eagle XL is in the “long loop” style and offers good purchase for thumb cocking. Three holes adorn the trigger, which is serrated and long like the original 1911’s. There’s a marginal amount of take-up and creep before the 5-pound trigger breaks, releasing the sear with no backlash. An extended beavertail grip safety eliminates hammer bite, and a memory bump makes it easy to engage the safety with a firm grip.

One feature I really like is the pistol’s flat, serrated mainspring housing. There are no serrations or checkering on the frontstrap. Double-diamond-checkered walnut grip panels with company’s owl’s head logo come standard on the Iver Johnson Eagle XL, plus you get one 8-round ACT-MAG magazine that has a bumper-type floorplate. The magazine catch is serrated and in the usual location behind the trigger on the left side of the frame.

As you might expect of an all-steel, extended- slide 1911, this one isn’t a lightweight, and it tips the scale at 42 ounces unloaded. One other option is a ported barrel and slide to help reduce muzzle flip during rapid fire; this enhancement adds $75 to the price of the pistol. Even with the extended slide, disassembly for cleaning is the same as any GI 1911.

This isn’t the first long-slide 1911 ever produced, so there’s sure to be full-sized holsters out there. But I decided I didn’t want a rig that was too bulky to the carry the Iver Johnson Eagle XL. So I went minimal with the versatile Galco Quick Slide holster. This belt-slide holster allows you to carry any 1911, no matter the barrel/slide length. It’s constructed of premium double-stitched saddle leather with deep hand molding that provides good retention. Its two-piece construction is contoured to the body for low-profile concealment and comfort. The forward cant also aids in concealment and rapid presentation. The Quick Slide is available in black or Havana brown, which is the color I selected.

I prefer heavier .45 ACP loads, and the three cartridges I chose to use in this evaluation reflect that preference: HPR’s 230-grain HyperClean JHPs, Sig Sauer’s 200-grain Elite Performance V-Crown JHPs and Speer’s 230-grain Gold Dot JHPs, which features a deep hollow cavity, a serrated jacket nose and Uni-Cor jacket bonding that virtually eliminates core/jacket separation while providing excellent expansion and penetration. The bullet is loaded in a nickel-plated case.

I had one of those rare February days where the temperature was about 45 degrees. Of course I headed for the range! The first chore was to set up my chronograph and get some velocity measurements. I was curious to see how much velocities would go up using the Eagle XL with its 6-inch barrel. The 200-grain Sig Sauer V-Crown JHP load boasts a factory-stated velocity of 918 fps, but out of the Eagle XL, it produced an even 1,000-fps average. According to my chronograph, the 230-grain HPR and Speer Gold Dot JHPs averaged 897 and 905 fps, respectively.

For the accuracy evaluation, I moved to the bench and used a sandbag rest to create five-shot groups on a target 25 yards away with each of the .45 ACP test cartridges. The best group, per my dial calipers, came in at 1.34 inches with the HPR 230-grain JHPs. The 200-grain Sig Sauer V-Crown JHPs came in second with a cluster that measured approximately 1.98 inches. 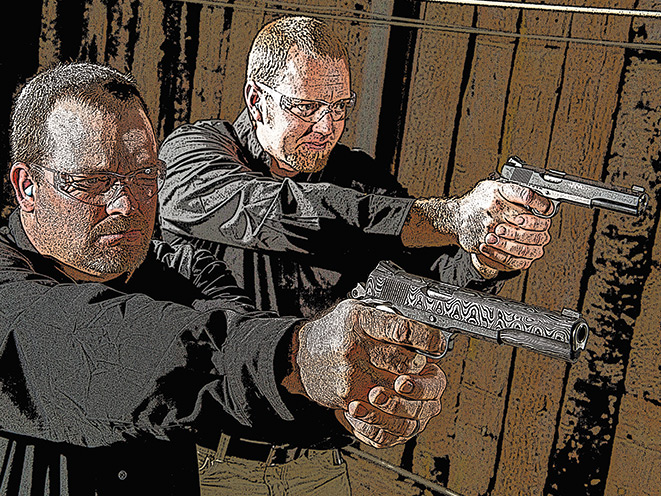 Next, I slid the Galco Quick Slide holster onto my belt along with a single magazine pouch with an extra magazine. I loaded each magazine with six random rounds and ran through a 30-round combat qualification course using a B-27 silhouette target. Distances varied from 3 to 15 yards and included one-handed (strong and support- hand only) shooting, double-taps, a triple-tap body armor drill as well as standing and kneeling barricade shooting. Each stage was timed, and there were a number of magazine changes forced by the limited number of rounds loaded in the magazines. My score out of a possible 300 was 294-13X after I blew one out into the 8-ring from the left-side barricade at 15 yards.

The results I obtained with the Iver Johnson Eagle XL were more than satisfactory. I only experienced two malfunctions, which amounted to the pistol not going fully into battery. This could have been an ammo problem. However, it was most likely a symptom that the gun wasn’t “broken in” yet. I suspect with more shooting that this problem will subside. It was interesting that the slide seems to work more slowly than that on a standard-length 1911. This caused no malfunctions or diminished the accuracy potential, but it was noticeable.

The Eagle XL’s extra weight helped tame the .45 ACP recoil and muzzle flip. All of the controls worked well and were easy to manipulate. The gun was shooting a bit to the right at the range, so I moved the adjustable BoMar-style rear sight to compensate accordingly. Overall, I was impressed with the Iver Johnson Eagle XL, and I think it would make a good competition pistol.

*Bullet weight measured in grains, velocity in fps by chronograph and accuracy in inches for the best five-shot groups at 25 yards.