The 5 Must-Have Guns for Every Purpose Imaginable

In truth, just about everything you'll never need from a gun can be done with just five. This includes everything from range work to personal protection to hunting.

1
SHARES
1.9k
VIEWS
Share on FacebookShare on Twitter
Some people want to have lots of guns, because collections are awesome. And some people want to have just enough to do most of what you’ll ever need to do with one. Guns, after all, are tools, and the right tools can do a whole lot. But what are the “must-have guns”? 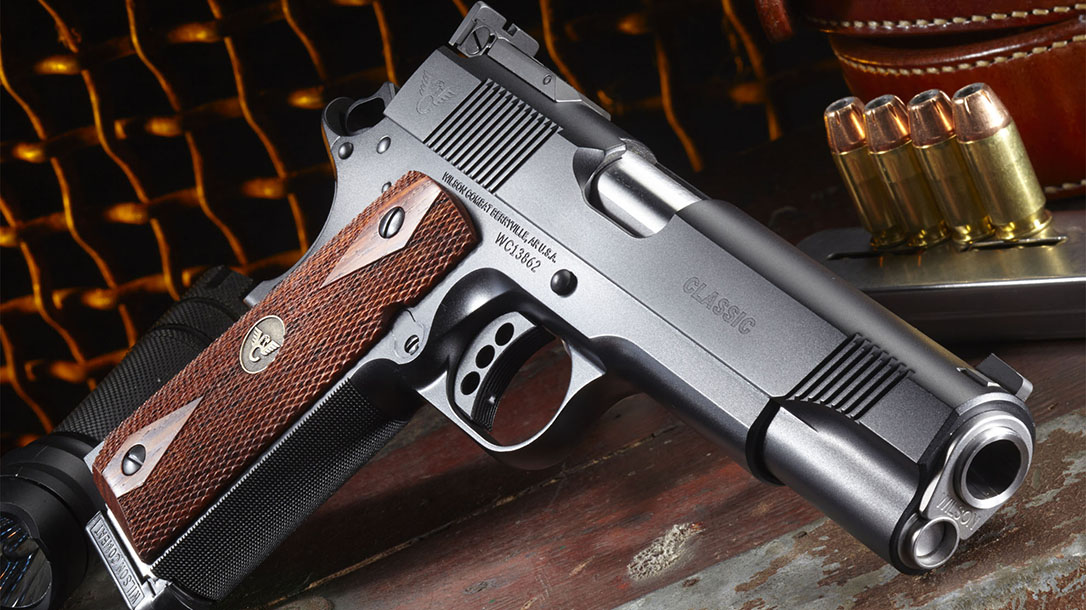 Stop Complaining About Gun Prices, Not All Guns Are Created Equal

In truth, just about everything you’ll never need from a gun can be done with just five. This includes everything from range work to personal protection to hunting.

Granted, there are some notable omissions, which we’ll go over as well.

Without further ado, here are the five “must-have guns” you should consider. 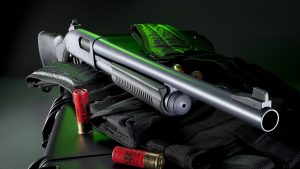 Unless you compete in certain specific shooting events, all the shotgun you’ll ever need is a 12-gauge pump action shotgun. This is perhaps the most useful of all of firearms. The Remington 870 is the most popular example, though the Mossberg 500 is right behind it. Plenty of other brands also make respectable examples too.

Despite what some people say, the fact is you don’t need a 3-½” magnum for waterfowl. Ballistic testing has shown the larger shell doesn’t pay enough dividends to make the shoulder-dislocating recoil worth it.

Good ammunition, a good choke, and good placement with a 3-inch shell are more than adequate to put down geese, ducks, sandhill crane and so on.

You can also get after turkeys, upland birds and small game while you’re at it.

Get a model with a swappable rifled barrel and you can load slug or sabot for big game. Those boys in the Midwest seem to do just fine with them, and they’re also great for hogs.

Among long guns, the shotgun is the preferred home protection system among long guns. Plenty of people take out the plug and load five for guarding the home and replace it when they hit the goose field, turkey woods or duck blind. Loaded with 00 or 000 buckshot, it will make mincemeat of the most savage intruder.

Sure, you could sub the pump for a decent semi-auto and everything previously mentioned applies. Unless you shoot skeet or trap competitively and are mandated to have a over-under or side-by-side, a 12-gauge pump is all you need. 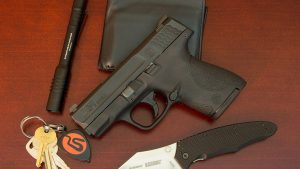 The civilian carrier arguably doesn’t need the kind of carrying capacity law enforcement officers and military personnel do, because civilians don’t generally get into extended shootouts. For concealed carry, a compact or subcompact pistol like the Smith & Wesson M&P Shield 9mm is all the handgun you’ll need.

A pistol that can be fired accurately and safely when operated by the user — and also that can be easily packed in a concealed carry holster and carried discreetly — is not hard to find and not expensive to obtain.

You can do all the target shooting you want with hardball, then load it up with JHP for CCW use.

Sure, having a bigger handgun for home defense is desirable — and are even more fun to shoot — but a decent compact is all the handgun you’ll likely ever need. 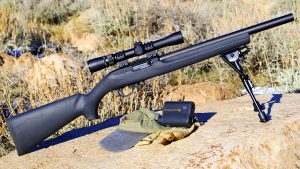 There are two uses for a .22 LR rifle: Plinking and small game. You can do a lot of both for not much money.

The Ruger 10/22 is the most popular model; it’s in every gun store, it’s been in production since the 1960s and there are all sorts of accessories for it.

However, plenty of other examples exist, such as competing guns by Mossberg, Marlin, Remington, Savage and plenty others besides. You can choose semi-auto, bolt-action, even lever action rimfires by Henry, which are a joy to shoot.

When it comes to hunting, small game is the most bang for the buck in terms of what you have to spend to get after them. It’s also the most neglected category of game.

Start reading the hunting literature and it’s almost all about big game; deer, elk, moose, bear, sheep, African game and so on. But the truth is that far more meals have been made of squirrel, grouse, rabbits, possum and so on than bighorn sheep.

As to recreational shooting, well, what else needs to be said? You can do more shooting with .22 LR than anything else, and for dirt cheap. 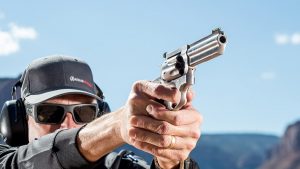 If you have to carry a big gun in the woods, one of the best choices is a Ruger GP100 or other service-size magnum revolver. A 10mm semi-auto also works very well.

For most of the Lower 48, the most you’d have to worry about is black bear, and maybe a wolf or a coyote or a snake. Elk and moose can certainly be a threat, but they are naturally skittish for the most part; attacks are very rare.

If you do a lot of backcountry travel in grizzly country, size up to a .41 Magnum or larger. For most people, a .357 Magnum or 10mm is all the packing gun you’ll need. If you want a full-size gun for home protection, that gives it dual roles. 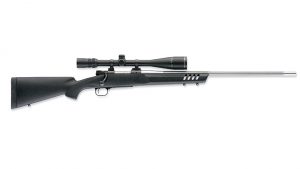 Bolt-action rifles like the Winchester Model 70 — or Savage 110 and Remington 700 — may have given way to the AR platform in terms of sales. However, in terms of efficacy and usefulness they still have the edge (given an appropriate selection of caliber).

Chassis-based rifle systems are more popular for long-range target shooting, but a quality stocked rifle is just as capable given appropriate selection. And oh yes, you can reach out and touch that target at 1,000 yards if you have a good rifle, a good scope and a proper cartridge.

You can also put a lot of meat in the freezer.

Much has been written about hunting calibers. Suffice it to say, some work best on medium game, some are best for big and/or dangerous game, and some will do everything up to the great bears.

The latter are among the most popular chamberings — .270 Winchester, 7mm Remington Magnum, .308, .30-06 and .300 Winchester Magnum are do-it-all calibers. You can even find light loadings for varminting in the latter three (though your shoulder won’t like it).

For the typical person, a rifle is not the best choice of personal defense weapon, as the effective range is upward of 1,000 yards. Sniper shots have been recorded with .308, .06 and .300 Win Mag up to one mile. The typical person lives in a residential area, so this really isn’t an appropriate choice of firearm for that purpose.

However, you can do all the long range target shooting you want. With care, you can get a lifetime of hunting and adventures in as well.

Some will notice the AR-15 isn’t listed here. It’s a fantastic platform, but it’s practical uses are limited in the base platform.

The AR-15 is capable as a home defense weapon, though intermediate rifle cartridges are a lot for the urban environment.

As a hunting rifle, an AR-15 in 5.56mm NATO/.223 Remington is so lacking compared to even a .243 that it’s not even paltry. It’s good for varminting and coyotes, but is terrible for small game. It should only be used for medium game in expert hands or as a last resort.

Granted, uppers chambered for different rounds that are capable hunting rounds can be installed; the AR-10 is the same operating system with a lower sized for .308, which is a very capable long range target round and hunting round. The base AR, however, is much more common and has these deficiencies.

The AR-15 in military guise as the M4, M16 and so on have served our armed forces and law enforcement personnel very well. They are a whole boatload of fun at the range, be in no doubt. But it is not good for much beyond that, at least in the base chambering.

When it comes to the largest and most dangerous of game, magnum rifles are needed.

For Africa, the .375 H&H Magnum is considered the bare minimum. Some consider the .338 Winchester Magnum the minimum for the great bears of North America. However, the typical hunter doesn’t spend much time pursuing these animals.

A rifle in these chamberings, for the typical person, is going to sit there collecting dust. If you’re going to hunt in Alaska, or anywhere for grizzly, or in Africa, then you will need it. If not, then you won’t.

Most people don’t need a service pistol, either. They are more fun to shoot and more accurate, for the most part, than subcompact and compact pistols. They are also good for home defense. But the reason why subcompact pistols like the S&W M&P Shield, Glock 26 and so on are so popular is they are easy to conceal and carry.

That Government 1911, Glock 17, Sig P226 and so on? Not so much. You’ll get less out of it than a compact. Granted, some people size up in winter, but again, you get more bang for the buck, so to speak, with a handgun that’s more packable.

What do you think, though? Is there a type of gun you think everyone should have?