Smith & Wesson has occasionally walked on the less-traveled path, and that includes sometimes building revolvers that are distinctively different than any other. That was the case when the company developed and introduced the Model 647 Varminter. 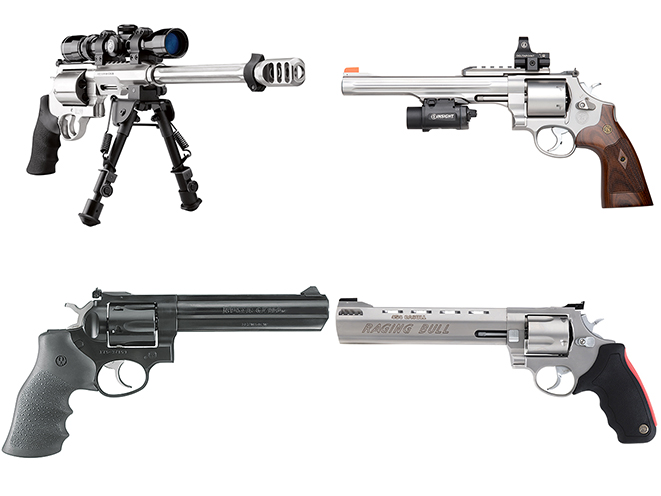 For a varmint shooter looking for the reliability and functional simplicity inherent in a revolver, I believe there might not be a better choice. Chambered to shoot the popular, powerful and flat-shooting .17 HMR, it’s a perfect match for smaller critters like marmots; badgers; prairie dogs; ground squirrels and, in some situations, coyotes.

The Varminter is a Smith & Wesson Performance Center-built firearm. It comes precision tuned and undergoes a higher degree of attention to detail and performance than some of the company’s other guns. It’s a six-shot, double-action/single-action (DA/SA) revolver equipped with a 12-inch barrel, a front sight blade and an adjustable rear sight. But it also includes two mounting rails. One is on the bottom of the barrel shroud that is removable. It’s typically used to mount the included bipod. A second one is machined into the top of the barrel shroud for optics, such as the included red/green-dot sight.

Aside from the black sights and wooden grips, the Varminter is made of stainless steel with a matte finish. The fluted, 12-inch barrel is attractively paired with a smooth-sided, hexagonal-shaped barrel shroud. And although Smith & Wesson classifies the Varminter as a medium-sized handgun, I found it to be fairly heavy, at 54 ounces unloaded, but not necessarily clumsy feeling.

The wraparound-style grips on the Varminter are made from some exotic red- and black-grained hardwood, with subtle checkering and the S&W logo etched onto each side. The grips join together at the front but are open in the back, exposing the metal grip frame. The grip isn’t overly large for a handgun of this size. But it seemed to fit my average-sized hand fairly well.

My first exposure to the Model 647 Varminter came during a Smith & Wesson-sponsored prairie dog shoot near the historic town of Medicine Bow, Wyoming. The writers and editors who attended the event got to shoot a variety of Thompson/Center and S&W products, and as a side benefit, the ranch owner enjoyed a reduction in his nuisance vermin population.

I can think of few hunting scenarios that provide more of a challenge for a handgunner than prairie dog shooting. The targets are small, the shots are often long and the seemingly constant wind is always problematic. Therefore, Smith & Wesson replaced the non-magnified reflex sights that typically come with Model 647 Varminters with Weaver 1.5-4x20mm handgun scopes. During the shoot, I dropped a number of prairie dogs with the Varminter at various ranges, frequently beyond 100 yards. I was surprised I couldn’t actually see the bullets hit the dogs while looking through the scope. Even with the fairly heavy weight of the handgun and the relatively light recoil of the .17 HMR, there was still enough muzzle jump to prohibit that.

The Weaver scope had been mounted in the traditional manner using standard-style scope rings, but I believe quick-release rings might have been a better alternative. Companies like Weaver, Leupold and Warne offer such quick-detach systems, which let you quickly and easily remove the scope to use other sighting methods. And, when the scope is remounted on the firearm, there’s usually no need re-zero it because the rings return perfectly to the same position.

I came away from the prairie dog shoot so impressed that I decided to have the Varminter shipped to me for more testing at my private firing range. Although field shooting exposes a firearm to many potential problems, a more controlled shooting environment can be beneficial. Fortunately, the Varminter performed well in both venues.

In the field and at the range, cartridges fed into the cylinder easily and ejected smoothly every time. After firing, the cylinder released and opened with ease, and then snapped back into place sharply without hesitation. 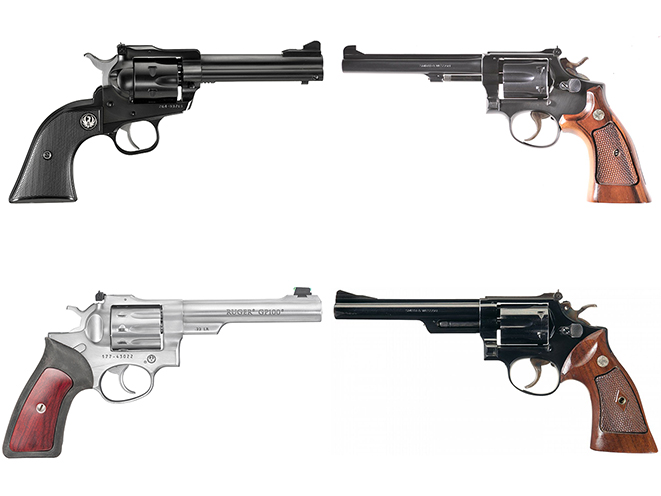 All three loads produced remarkably similar five-shot groups off the bench. The smallest group came from the Hornady cartridges and measured 1.13 inches. But the performance of the Federal and Remington ammunition wasn’t substantially different. Furthermore, the smallest groups in those cases measured only 1.25 inches. After being satisfied with the Varminter’s capabilities for accurately punching holes in paper, I turned its muzzle toward some tiny Champion Duraseal swinging prairie dog targets set at 100 yards, where I experienced déjà vu. A few of those dogs escaped me, but considerably more were sent swinging as the little .17-caliber bullets hit their mark.

The Model 647 Varminter has many favorable characteristics. It’s clearly made with the attention to detail so common with Smith & Wesson products. I particularly liked that S&W included the red/green-dot sight and bipod. In addition, I really liked the versatility built into this handgun. If you prefer iron sights, that’s easily accommodated. For those of us with eyes that aren’t quite what they used to be, the reflex sight is a great option. And for greater precision, being able to easily mount a handgun scope on the Varminter is a great benefit when it comes to longer shots.

Overall, I couldn’t detect one thing wrong with the design of the Varminter. And if your quest isn’t to rid the world of pests, I found this handgun produced equally good results on critters such as cotton-tailed rabbits.

*Bullet weight measured in grains and accuracy in inches for best five-shot groups at 50 yards.