by Rob Garrett
in Guns, Rifles
0

"As with any other firearm, if you select to use the Springfield Saint for personal defense, I would highly encourage seeking appropriate training and becoming familiar with local laws and regulations."

When Springfield Armory unveiled the Saint late in 2016, the blogosphere blew up. Some asked, “Why do we need another AR?” while others applauded Springfield for bringing a really cool rifle to the market. While it is another AR, the Springfield Saint is not just another AR! 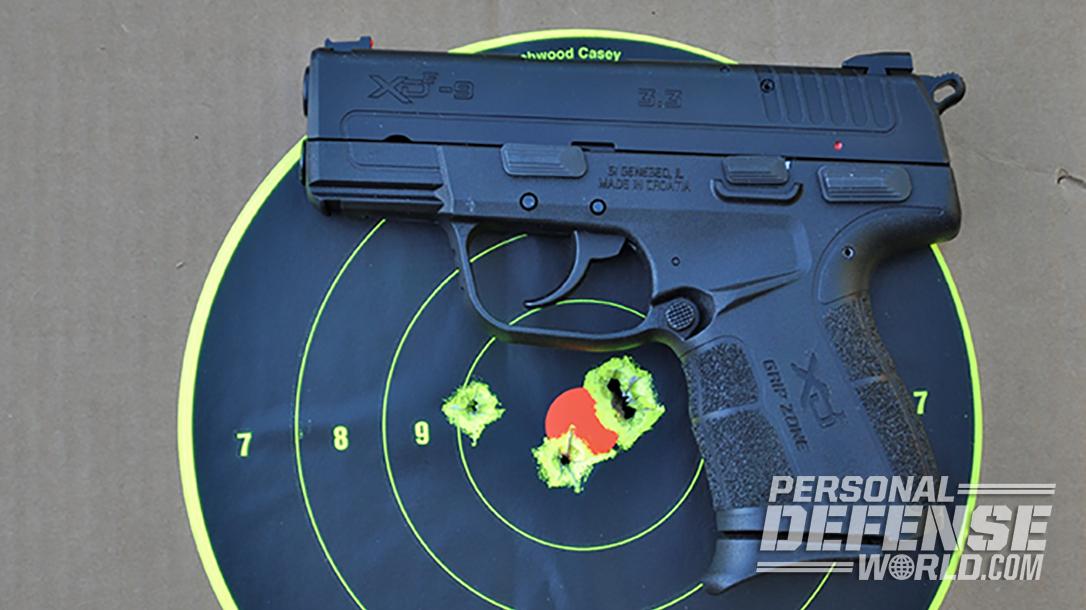 Springfield Armory is setting out to change the narrative about black rifles and redefine firearms ownership and personal responsibility. The company even launched a new website, defendyourlegacy.com, for “the willing and capable who refuse to give into the growing plague of believing somebody else is going to do it for me.” Springfield’s aim is to get us, and a new generation of shooters, back to our roots. We have no need to apologize for firearms ownership, regardless of what a firearm looks like.

According to CEO Denny Reese, Springfield Armory wanted to do an AR for several years, but the timing wasn’t right. It is Springfield’s goal to be a long-term and serious competitor in the AR market. For the Saint project, Springfield Armory partnered with Bravo Company Manufacturing (BCM) for a number of components. BCM has a reputation for being a solid company that produces some of the best rifles and parts on the market. In addition, the company places a high value on patriotism and providing employment to veterans. This partnership enabled the Saint to be equipped with quality parts while still being competitively price.

As with other ARs, the Saint has a lot to offer in the personal and home-defense role. The rifles are lightweight, easy to handle and have very little felt recoil. This can be important for those who are new to firearms or smaller-statured shooters. The adjustable stock allows the length of pull to be quickly and easily adapted to the individual shooter for a more comfortable fit. The manual of arms is relatively simple, and the controls on an AR are not complicated. When it comes to ammunition, most major companies offer loads that are designed to provide effective terminal ballistics and reduce over-penetration. Adding a basic red-dot sight and a white light completes the package.

The Saint comes in a very nice hard case with buckle latches, sturdy hinges and four locations for security locks—an important feature for securing the rifle. As for the rifle itself, I was immediately impressed with its fit and finish.

The upper and lower receivers are made of 7075-T6 aluminum that has been Type III hardcoat anodized. A nice addition is the Accu-Tite tension system in the lower receiver, which helps hold the upper and lower together tightly for greater precision. As for the upper, the 16-inch barrel is manufactured from chrome-moly-vanadium steel with a 5.56mm NATO chamber and a 1-in-8-inch, right-hand twist rate. The barrel has also been Melonited for durability and corrosion resistance.

The Saint is a traditional direct impingement rifle with a mid-length gas system and an A2-style gas block and front sight. Surrounding the barrel and gas system is BCM’s new PKMR handguard, which is low profile and offers textured panels for positive support-hand control over the rifle. KeyMod slots are located in the 1 and 11 o’clock positions for accessories.

The Saint is also equipped with a Springfield Armory low-profile, flip-up rear sight that offers dual apertures and 0.5-MOA windage adjustments via a small knob. Internally, the M16 bolt carrier group is machined from Carpenter 158 steel, and the bolt is shot peened and magnetic-particle (MP) inspected.

The lower receiver has some nice upgrades, including BCM’s six-position Gunfighter stock and Mod 3 pistol grip. Another nice touch is the safety selector, which has pictographic markings. The magazine and bolt releases are standard AR, but the trigger is surprising. Springfield selected a single-stage trigger and then applied nickel-boron to the fire control components. The trigger on my test rifle broke cleanly at 7.19 pounds with no creep or grit. However, the pull weight felt much lighter due to the trigger group’s quality parts and nickel-boron coating. 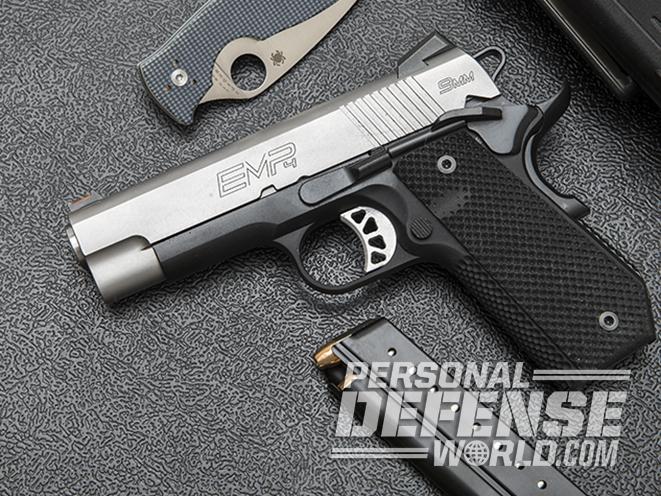 When it was time to hit the range, I installed an Aimpoint PRO (Patrol Rifle Optic) on the Saint. Featuring a 2-MOA dot, the PRO is powered by a single 3-volt lithium battery. Aimpoint’s advanced circuitry gives the PRO a run time of up to 30,000 hours on the seventh daylight setting. With the PRO in place, the Saint weighed about 7.25 pounds.

For the formal range testing, I selected Hornady’s 55-grain TAP Urban load along with Federal’s 55-grain Sierra GameKing HPs and Winchester’s 50-grain Ballistic Silvertip rounds. The Hornady TAP Urban load was developed for law enforcement, and it’s my first choice for personal defense. The Federal and Winchester loads are sporting rounds that are suitable for hunting. The Saint was 100-percent reliable with these three loads as well as a magazine of M855/SS109 (green-tip) military ball ammunition.

While not necessary for inside a home, those who live in rural areas may have a need for a magnified optic. So, I paired the PRO with Aimpoint’s new 3X-C magnifier for testing at 50 yards. Aimpoint designed the 3X-C to provide the commercial market with a quality magnifier at a very reasonable price point. The 3X-C features centering adjustments and a dioptric adjustment. Aimpoint offers a quick-detach flip mount for the 3X-C to give the shooter more options.

From a shooter’s perspective, the Saint was a lot of fun. I easily engaged 10-inch steel targets out to 300 yards using the Aimpoint PRO and 3X-C magnifier. My 50-yard groups were less than 0.5 inches wide, and the magnifier enabled me to use a bullseye.

One of the new security products I found interesting is the Hornady RAPiD Safe AR Gunlocker. In the past several years, Hornady has taken RFID technology and applied it to home security safes. The AR Gunlocker fully encloses the rifle and can be mounted horizontally or vertically. Foam inserts allow the AR Gunlocker to accommodate two long guns, and a 1,500-pound cable enables the unit to be tethered to a solid, fixed object for additional security. The AR Gunlocker can be opened by using a RFID wristband, a key fob, a key pad or an RFID sticker placed on your cell phone or other items.

As with any other firearm, if you select to use the Springfield Saint for personal defense, I would highly encourage seeking appropriate training and becoming familiar with local laws and regulations. Once you’ve mastered the basics, move on to more dynamic drills. Practice shooting from a kneeling position both over and around cover to replicate shooting while kneeling behind a bed. Moving from one gunfire station to another will reinforce manipulation of the manual safety and muzzle control. As your confidence and skills improve, extend the ranges of the targets and use a shot timer.

While it is not recommended that a citizen “clear” his or her house, there may be a need to move to a children’s bedroom or a blocking location. Practice moving through your residence with the Saint rifle, first with the lights on, and then in the dark. When possible, utilize existing lights and minimize the use of any weapon-mounted light. Finally, if possible, practice at a range during low light. Shooters always seem surprised at how much smoke the white light illuminates.

Home defense is a very personal decision that can be influenced by many factors, including the presence of children, guests, your home’s layout and applicable laws. For that moment where you or your family is facing a violent threat, the safest tactic is to remain in a fixed location and call law enforcement. In this situation, the Saint is a far better option than a handgun.

There is a quote on the Defend Your Legacy website that caught my attention: “A legacy is defined by choices, and only limited by the ability to defend it!” This is a strong statement that leaves little room for compromise. Springfield Armory has indeed started a new chapter in the life of the company, and the Saint is far more than “just another AR.” I look forward to seeing where this new initiative takes the company and the industry.

*Bullet weight measured in grains, velocity in fps by chronograph and accuracy in inches for best five-shot groups.