"Overall, I am very impressed with the H9. With over 400 rounds through it, I have yet to have any sort of failure or stoppage. It possesses an uncanny degree of accuracy and excellent ergonomics. But I think it is the gun’s engineering that made me want to own it."

In 2016, a small firm that few people knew about created quite a stir when it sent out an e-blast for its new semi-auto pistol. Dubbed the Hudson H9, the new gun was touted as a marriage between the 1911 and a striker-fired pistol. Its dramatic profile and sculpted contours generated intense interest among firearms industry professionals. 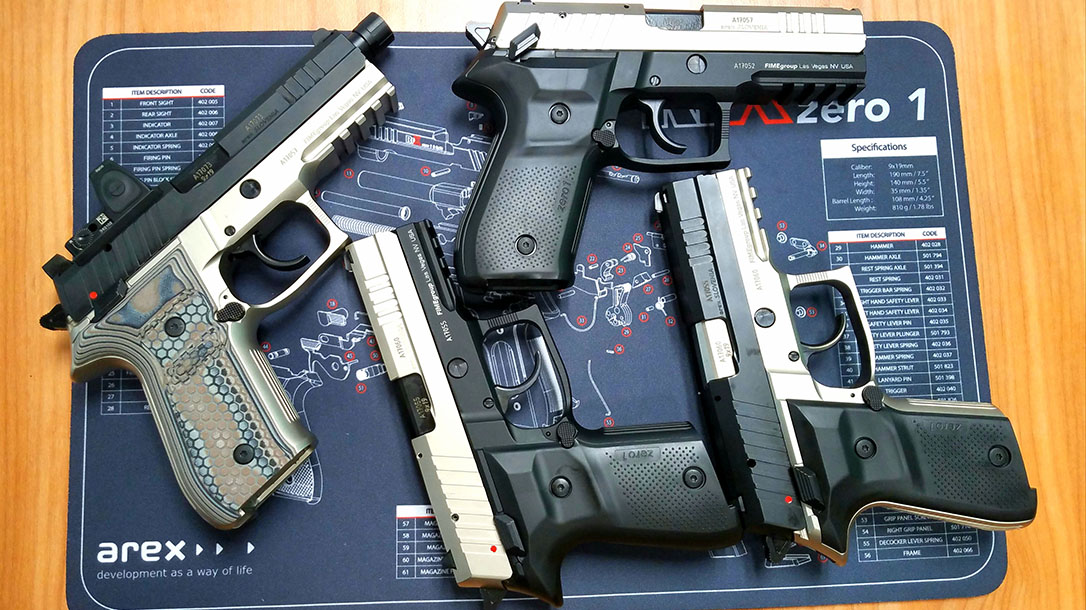 I have to admit that I was one of those people who stood in line for over an hour at the SHOT Show Range Day to hold and shoot the new H9. I’d received the e-blast announcement and scoured the company’s website every couple days looking for more information. After handling the H9 and firing one magazine of 9mm rounds through it, I was convinced that it was indeed a combination of the best aspects of a striker-fired gun and the 1911. But what I found even more interesting are the design features that borrowed from neither parent’s lineage.

The H9 was designed by husband-and-wife team Cy and Lauren Hudson, who created Hudson Manufacturing and spent four years’ worth of research, development and just plain hard work. When Cy, a West Point graduate, was in his last year of duty with the Army, the couple tried to figure out what to do next. But they both shared a passion for shooting.

Lauren said, “We both love shooting the 1911, but the Smith & Wesson M&P Shield is the gun we both carry. What if we could combine the best features of both guns? After doing some research, we decided the idea had merit.”

“But we knew we couldn’t build a company by starting with a compact, single-stack carry pistol,” Cy said. “I believe in this market you need to create a duty-sized pistol first, then build a family of guns around it.”

The H9 is a semi-auto 9mm pistol with a 15+1 capacity. It’s obvious that the grip angle and magazine release are 1911 inspired, as is the trigger. After stripping the gun, I found that the barrel did not have a link like a 1911, or even a fixed cutout like the Browning Hi-Power. The low placement of the single recoil spring also left me with questions. These two features are neither 1911 nor striker-gun inspired and are the basis for a number of patents.

Cy responded, “We wanted to drop the barrel as close to the hand as possible, and we wanted it to be a short-recoil- operated pistol. We didn’t want to change a system that has been trusted for decades, especially in today’s market. We also know a traditional Browning link or link-less lockup would have taken up real estate where we needed to eliminate it. So, we moved it forward and placed the big front locking lug where it would contact the takedown pin.

“We wanted to bring the pistol down to the hand instead of bringing the hand up to the pistol. That basically became a real estate option that resulted in one of our favorite things about our design: The slide bottoms out on that recoil spring below the plane of your wrist. The wrist is your biomechanical pivot point. When the slide cycles above the wrist, it creates torque. But on the H9, it goes straight back into the wrist and reduces torque.”

With the barrel cam moved forward and down to engage the takedown pin, there wasn’t room for a recoil spring in the traditional location. Cy continued, “We could have gone the route of the Walther P5 and put two nested recoils springs along the grooves, but that would have made the gun really wide and bulky, so we moved it down and utilized the space in front of the triggerguard.” The location of the single flat recoil spring and guide rod gives the H9 its distinctive appearance.

Lauren added, “I guess, to our benefit, we didn’t have the history of designing other firearms, so we didn’t have any preexisting design goals like the camming system having to be directly above the center of mass. We could move things forward and down and reimagine things in a different configuration. I think the drive was to take off a good deal of real estate on the grip and put some functional components in front of the triggerguard.”

The frame assembly is machined from 4140 steel and it houses the chassis, or frame insert, which contains the ejector, rails, ambidextrous slide stop, sear and disconnector. With the frame insert in place, it captures the recoil spring guide rod. On the H9, the chassis is the serialized part, meaning this part can be moved from frame to frame. This is interesting because Hudson recently announced the H9A with a few improvements. Those improvements include a lightweight alloy frame that shaves nearly 8 ounces from the weight of the H9. You should be able to move the chassis without buying a completely new gun. As Lauren put it, “We spent extra time during development to make sure universal parts could make for a family of pistols.”

Hudson machine-checkers the H9’s frontstrap with a very fine pattern to give the shooter a secure firing grip without being so coarse as to tear skin or catch on clothing. The magazine well is flared for quick reloads; a relief cut at the front of the mag well can help a shooter remove a stuck magazine. The grip panels are G10 like the backstrap, which has fine checkering near the bottom. There’s even a relief at the heel for a lanyard, and the magazine release is reversible.

Even though the H9 is a striker-fired gun, the trigger feels very much like a 1911’s. It is a non- pivoting trigger that tracks straight back. My test sample’s trigger broke at 4.5 pounds with just a little bit of take-up and almost no overtravel. Hudson has also equipped the gun with a trigger safety that pivots at the trigger’s bottom instead of near the trigger’s center. This was one of the ongoing refinements the Hudsons made during the gun’s development. Lauren had problems disengaging the safety because her fingers naturally went to the bottom of the trigger. So, it was moved and now shooters will disengage it instinctively without compromising their trigger pull. Rather than placing a small blade in the center of the trigger, Hudson made its trigger safety blade as wide as the trigger shoe for better comfort.

Finally, Hudson equips the H9 with great sights right out of the box. Cy told me they use the same front and rear sight cuts as those on the S&W M&P pistols. This means you can easily add aftermarket M&P sights if you wish. That being said, the H9 uses a Trijicon HD front sight with a tritium insert surrounded by a florescent orange ring that draws the eye’s focus to it like nothing else I have used. The rear sight possesses a U-shaped notch, and the front sight almost seems to center itself. It’s a slick setup, and I don’t think anyone would need to change these sights.

All of my accuracy testing was doneat 25 yards, shooting from a DOA Tactical Bench and using a Millett BenchMaster for support. I was able to get a rock-solid hold on the H9’s sights as the flat light rail on the gun’s frame was wobble free on the BenchMaster. I was able to keep the sights on target as I pressed the H9’s trigger straight back.

Aguila’s 115-grain FMJs took honors for the smallest group, with five shots clustering into 0.61 inches. This is economically-priced range ammunition, and its accuracy was a pleasant surprise. It fed and cycled fine in the H9. Another pleasant surprise was the NovX 65-grain ARX load. Using a copper/polymer bullet weighing just 65 grains and loaded into a stainless steel case, this load had a velocity just a few feet per second shy of 1,800 fps and generated a whopping 466 foot-pounds of energy. My best five shot group with the Novx rounds measured just 0.72 inches. It also cycled flawlessly, but the felt recoil was much lighter than even the 115-grain rounds. I used a wide variety of bullet weights—each with a different overall length and profile, and the H9 was flawless with every load I tried.

For the field portion of my testing, I used an MGM BC-C Zone steel target, which approximates a USPSA target with the D-zone removed. At 15 yards, I would draw and fire the H9, attempting to place two hits on the target with the shortest amount of time between shots. Using a PACT electronic timer to measure my splits, or time between shots, I fired 25 double-taps using Precision Delta’s 124-grain JHP rounds. My times ran from 0.16 to 0.23 seconds, with the average being 0.19 seconds. It’s been many years since I was an active competitor and practiced this exercise regularly, yet the H9 made these quick double-taps seem effortless. 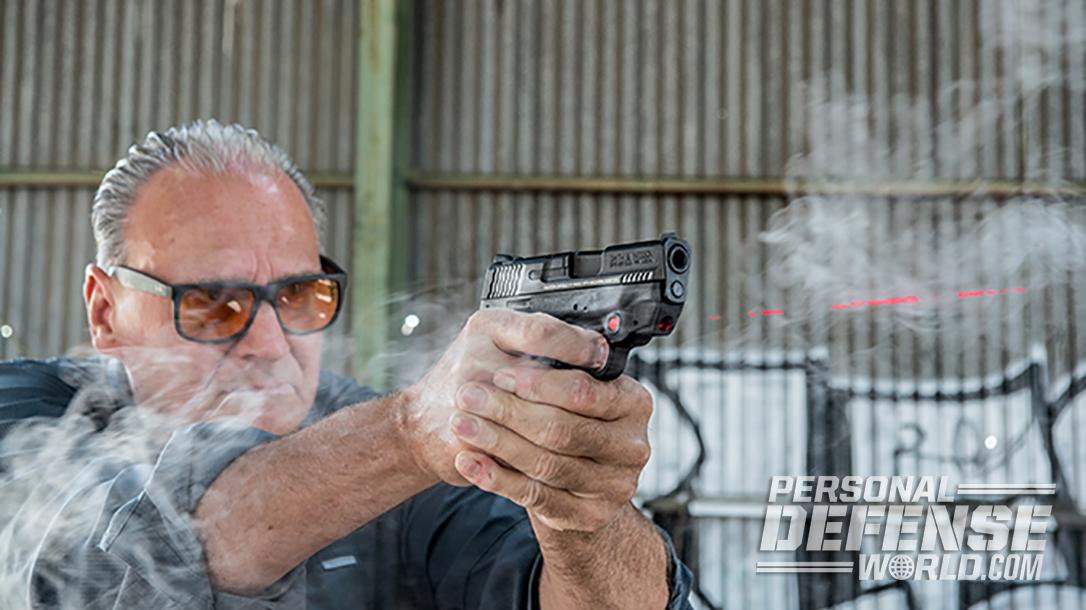 I attribute this to two factors. First, the placement of the H9’s recoil spring not only reduced the gun’s torque but also its muzzle flip. I was back on target quicker than I have ever been with any type of handgun. Secondly, the trigger has a positive reset. There’s nothing mushy about it, and I never experienced any trigger freeze. The H9’s sights were also a big help.

Hudson Manufacturing ships the H9 with three 15-round magazines. The magazines use a polymer follower and basepad that can easily be removed for cleaning. My test sample also came without a manual safety. However, the Hudsons informed me that manual thumb safeties will be available shortly. They also said owners will be able to install them easily. I like the gun as it was set up, but it’s nice to have the option of a thumb safety.

Overall, I am very impressed with the H9. With over 400 rounds through it, I have yet to have any sort of failure or stoppage. It possesses an uncanny degree of accuracy and excellent ergonomics. But I think it is the gun’s engineering that made me want to own it. It’s one thing to innovate, but taking an idea from concept to production is a different matter. My test sample exhibits an exemplary degree of fit and finish so well executed that it’s hard to imagine this is the company’s first year in production. I’m looking forward to seeing what’s next for this young couple and Hudson Manufacturing!

*Bullet weight measured in grains, velocity in fps by chronograph and accuracy in inches for the best five-shot groups at 25 yards.