A school resource officer is being hailed as a hero for shooting and injuring a gunman at a school in Dixon, Ill., yesterday morning.

The Chicago Tribune reports that the incident began when 19-year-old Matthew Milby walked onto the Dixon High School campus at around 8 a.m. and fired several rounds near the school’s gym. The school resource officer, later identified as Mark Dallas, ran to the area and confronted Milby, who then bolted from the scene.

Dallas gave chase; Milby fired multiple rounds at him while running, but none struck the school resource officer. Dallas then returned fire and shot Milby, who was taken into custody just outside the school.

CBS Chicago says Milby was a former student who had been recently expelled. Julie Milby, the shooter’s mother, said her son had been part of the track and football teams, but was kicked off the latter for smoking marijuana. Police records cited by the Daily Mail show Milby had been arrested for trespassing on a railroad property and had been charged with marijuana possession.

Julie Milby also claimed her son had been bullied by classmates.

“I just know that the kid’s been real sad for a long time,” she said.

She also told reporters she owns the 9mm pistol her son used in the shooting, but she says she didn’t keep it at the house; she kept it at her 91-year-old grandfather’s house.

According to the New York Times, Dallas is a 15-year veteran of the Dixon Police Department. He’s been a school resource officer at Dixon High School for five years.

In all, Dallas has 24 years of law enforcement experience. He has been placed on administrative leave, per standard procedure.

Authorities have praised Dallas for his actions, which saved lives and led to Milby’s arrest.

“I could not be more proud of the police officer and the way he responded to the situation. With shots ringing out through the hallways of the school, he charged towards the suspect and confronted him, head on,” Dixon Police Chief Steven Howell Jr. stated. “Because of his heroic actions, countless lives were saved. We are forever indebted to him for his service and his bravery.”

“From the angle I’m looking at right now, a lot of things went right today when a great many of them could have gone wrong,” Arellano Jr. said. “Things could have gone much worse.”

Today, we should all be very thankful to school resource officer Mark Dallas for his bravery and quick action to immediately diffuse a dangerous situation at Dixon High School.

Even Vice President Mike Pence commented on the situation, writing the following on Twitter:

Another example of the brave work performed by law enforcement each and every day. Lives were saved thanks to the heroic actions of school resource officer Mark Dallas. #PoliceWeek https://t.co/RNPuJTX6sF 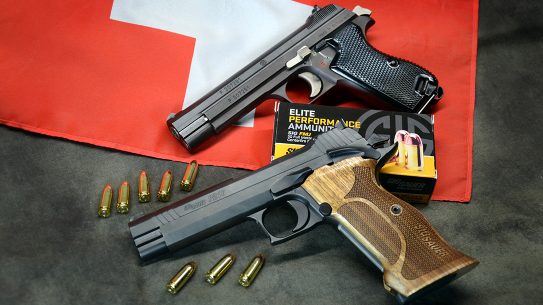 How the SIG P210 Target Stacks Up Against a Classic P210