An armed citizen shot and killed a man who walked into an Oklahoma City restaurant and opened fire Thursday evening.

The Oklahoma City Police Department says the unidentified suspect entered Louie’s Grill & Bar at around 6:30 p.m., pulled out a pistol and started shooting. Two people were struck by the gunfire.

After leaving the restaurant, the shooter was then confronted by an armed citizen. Witness Ron Benton says the gunman—described only as an 18-to-20-year-old white male—was wearing eye and ear protection as if at a shooting range and holding a gun in one hand when another man in an SUV pulled into the parking lot. When the man saw what was happening, he grabbed a handgun from inside his vehicle.

“I spotted the shooter walking along the sidewalk in the trees and I pointed saying, ‘He’s there! He’s there!'” Benton told The Oklahoman. “He kind of stopped walking and was kind of pacing around and they are screaming, ‘Put it down!’ [The gunman] must have made a move because shots began being fired. I got down behind a car, and I don’t know exactly how many shots were fired but there were a few. When I got up, he was down on the ground… and a police car was coming in at that time.”

The suspect was shot by the armed citizen an unknown number of times and died at the scene.

Police are still working to identify the gunman and ascertain his motives.

“Right now, all I know is that it was just a good Samaritan that was there and looks like he took the right measures to be able to put an end to a terrible, terrible incident,” Oklahoma City Police Department Captain Mathews said.

“This is a blessing that it was stopped at this point, who knew when this guy was going to stop shooting people,” Mathews added.

The two people who were shot are reportedly Natalie Will and her 12-year-old daughter Niah Giles. Dennis Will, Natalie’s father, told KFOR his daughter was grazed on the arm. His granddaughter was shot near the tailbone. Both were taken to an area hospital for treatment and are expected to survive.

Will says his daughter and granddaughter were at Louie’s Bar & Grill celebrating the birthday of another child.

Another man said his 14-year-old daughter was shot. He says his daughter is the best friend of the girl who was celebrating her birthday.

Meanwhile, two other people suffered injuries inside the restaurant. One man fell and broke his arm while trying to run out of the restaurant after shots were fired, and another person had a minor injury, the origin of which is unknown.

Police are continuing to investigate the incident and are in the process of interviewing at least 100 witnesses who were in and around the restaurant. 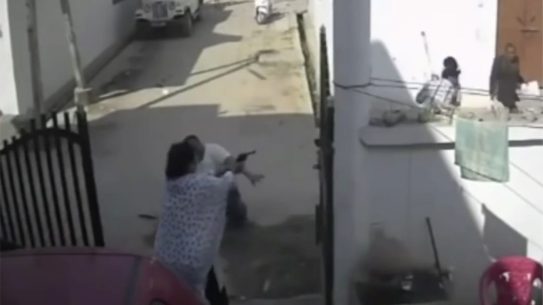 A man getting beaten by a pack of thugs as a result of a...