A record 87,154 people attended this year’s NRA Annual Meetings & Exhibits in Dallas, Texas, over the weekend. That number doesn’t include the anti-gun protestors who could be seen outside the Kay Bailey Hutchison Convention Center. One such protest was organized by a man named Dominique Alexander.

To learn what he’s all about, YouTuber Jean-Guy Tremblay, a French-Canadian who bears a strong resemblance to Canadian-American political commentator, actor and comedian Steven Crowder, went and interviewed him. Watch the video above to see the hilarity ensue.

In addition to showcasing Crowder’s ability to do a French-Canadian accent, the video reveals that the number of protestors wasn’t actually all that substantial. Therefore, media outlets may have jumped the gun on the number of reporters sent to cover the protest.

“It’s almost like the media were hoping the NRA would be protested more than they actually were. Then failed to scale back operations to accommodate reality,” Crowder writes on his website.

The video also shows reporters and other protestors ignoring Crowder when confronted with Alexander’s shady past.

The 148th NRA Annual Meetings & Exhibits is set for next April at the Indiana Convention Center in Indianapolis. 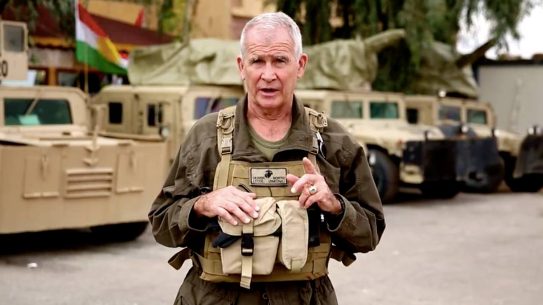 Oliver North Set to Become Next President of the NRA

Oliver North has been chosen as the next president of the National Rifle Association,...