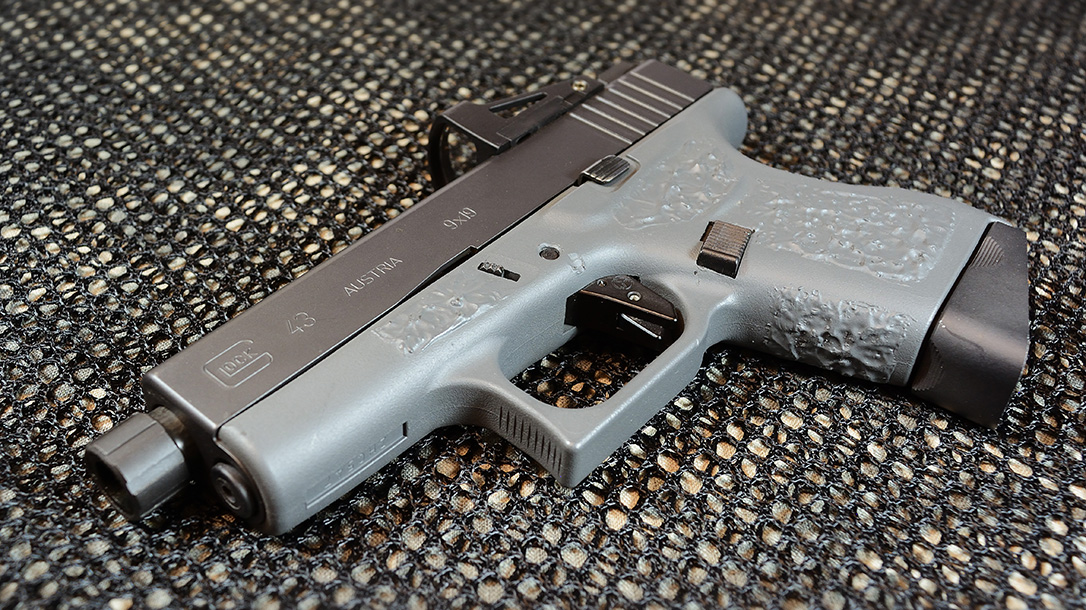 1 of 10
Suarez Guttersnipe Glock 43
“The Guttersnipe Package turns a G43 into a superior covert-carry handgun that excels in gunfighting—not just the reactive defense most often associated with smaller-framed handguns. 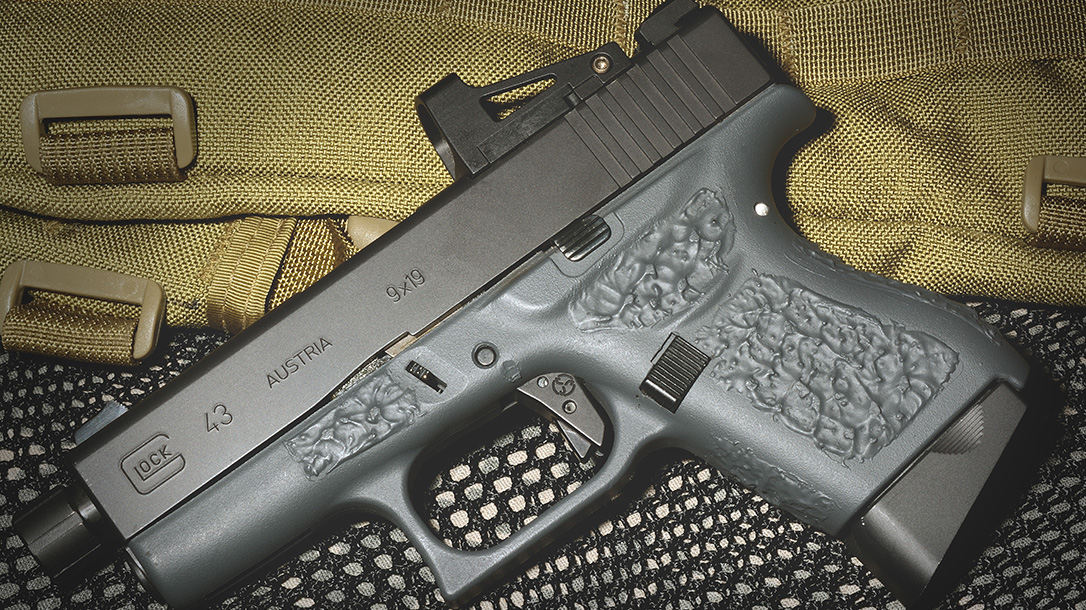 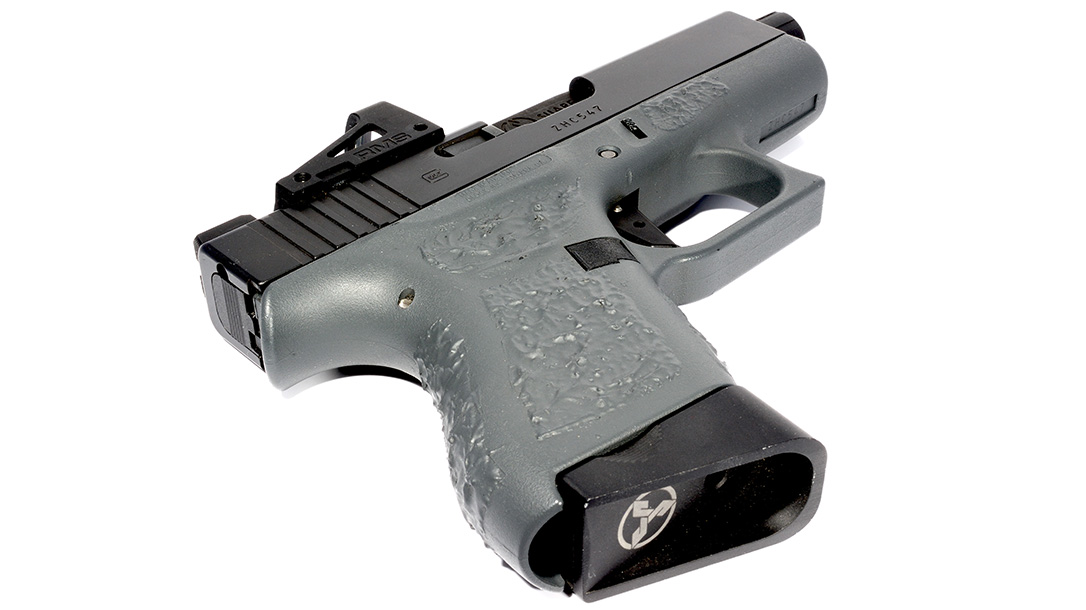 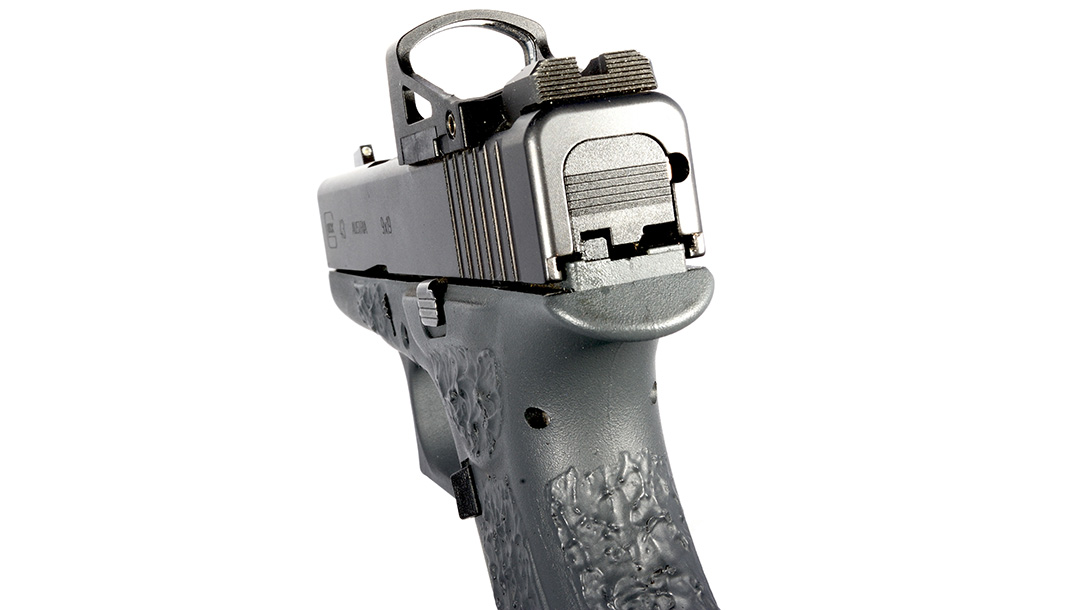 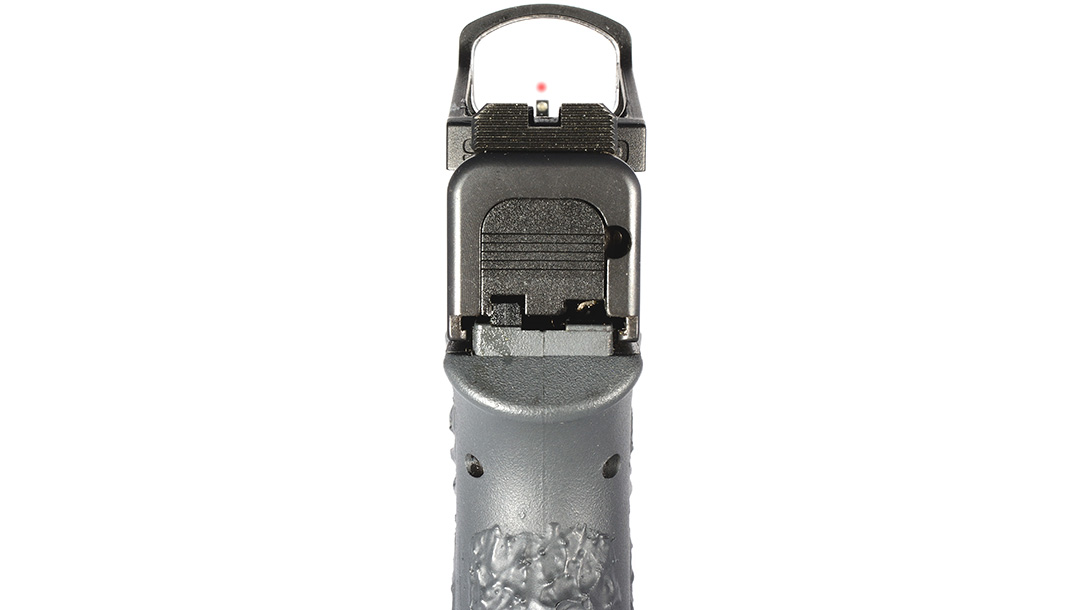 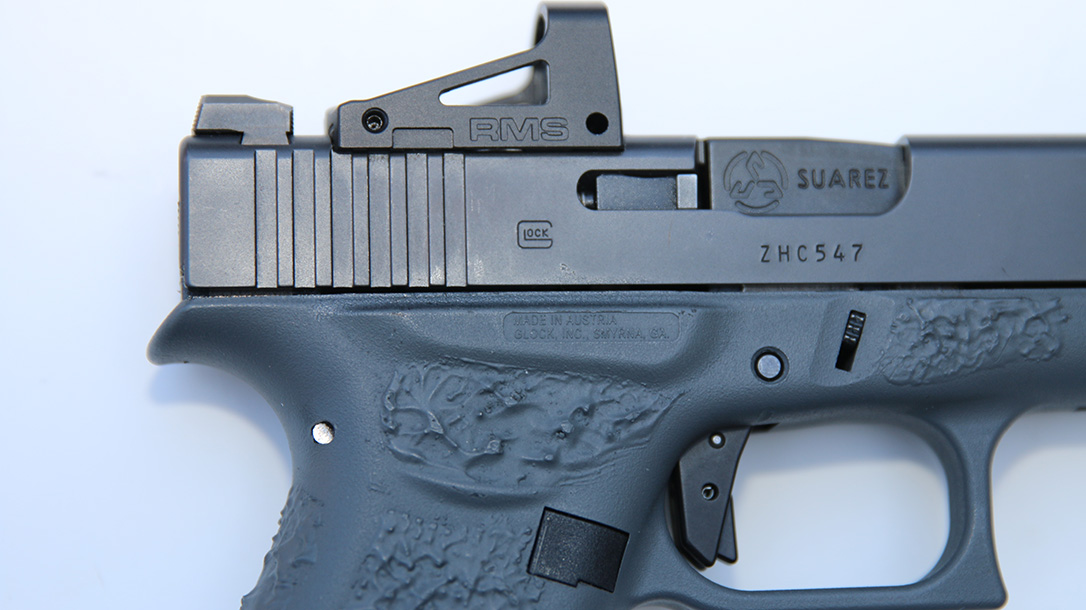 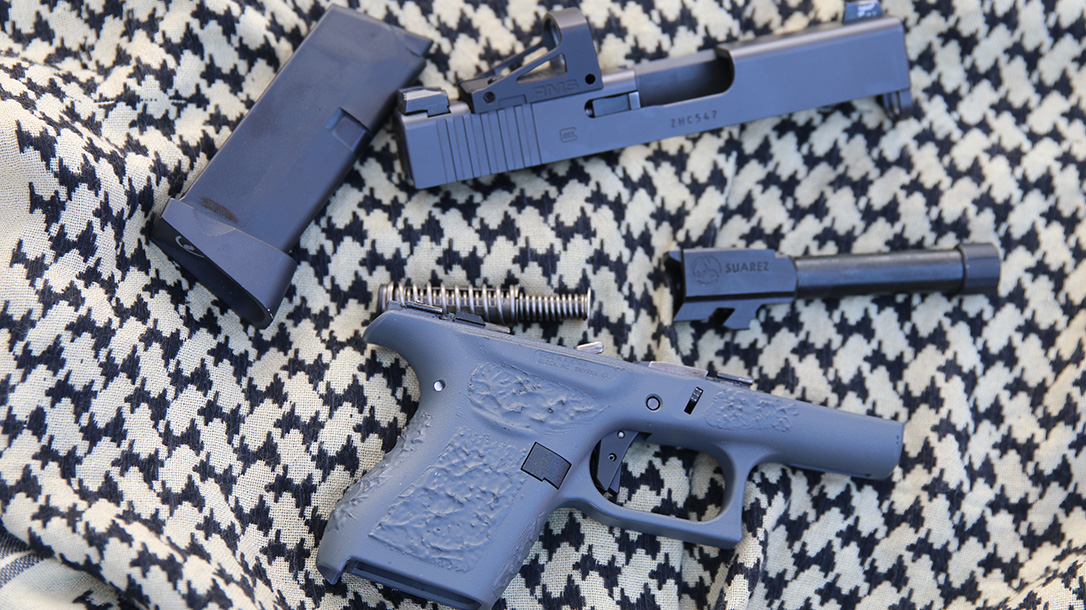 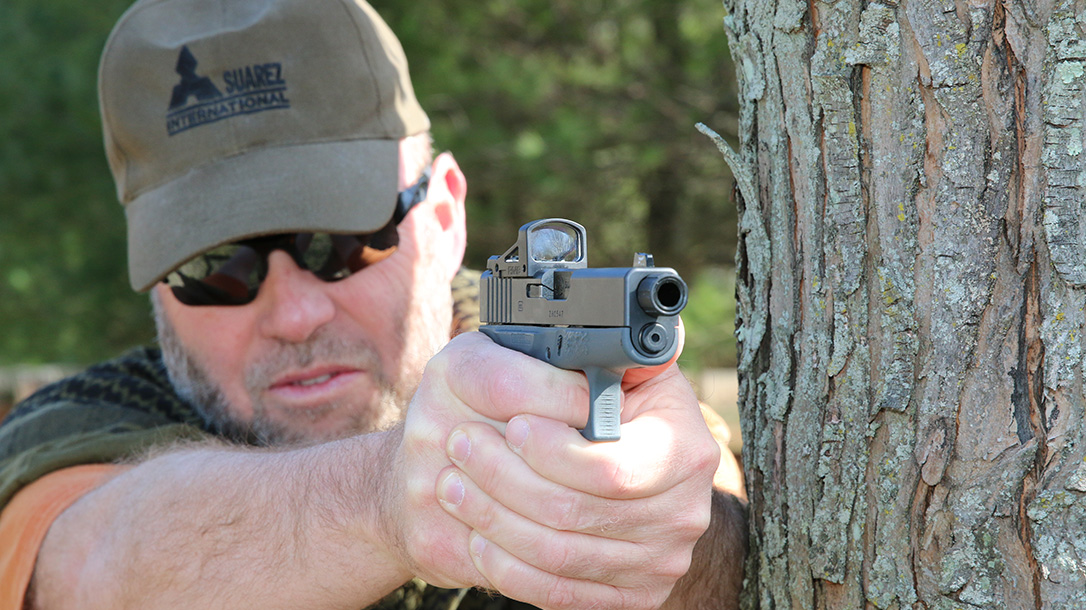 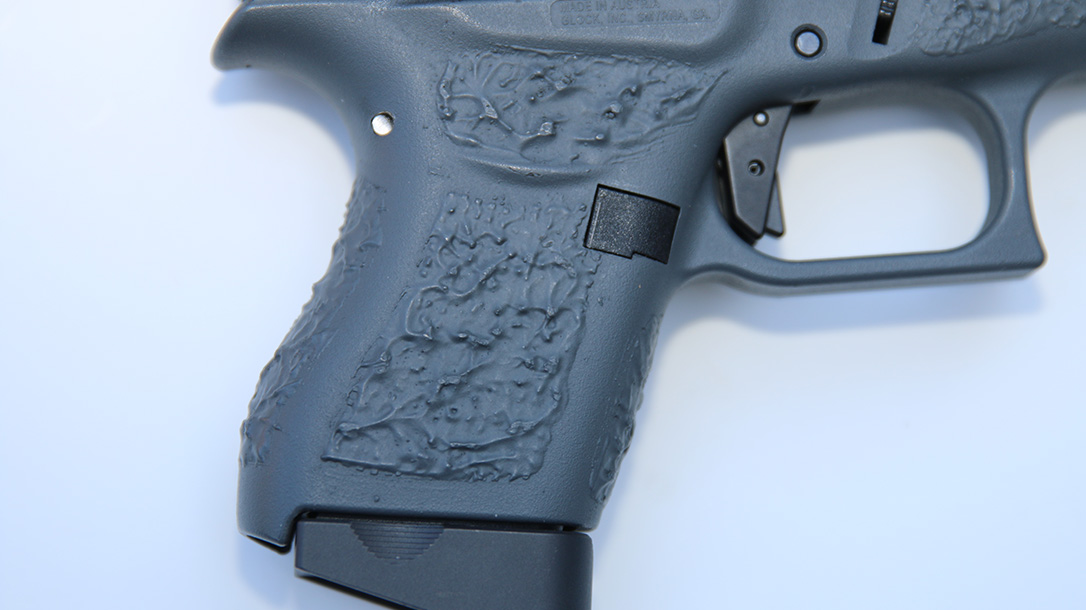 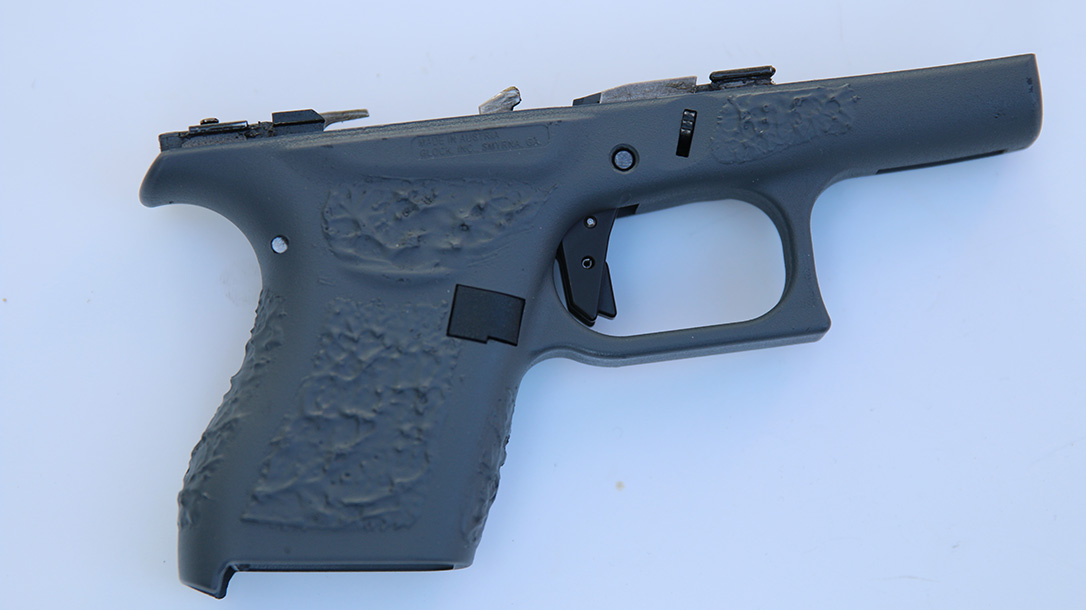 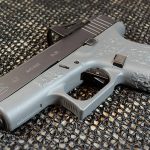 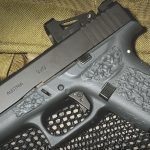 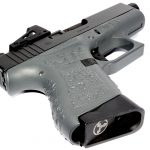 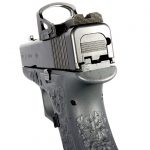 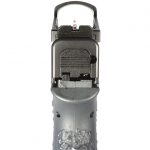 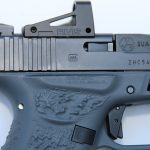 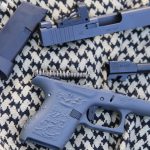 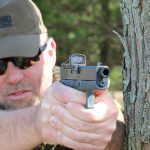 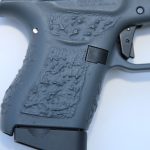 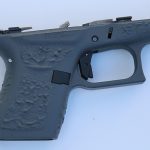 Recent events illustrate what a dangerous world we inhabit, with terrorist attacks growing in frequency. If there were only one piece of advice I could give readers, it is to receive professional firearms training. This especially applies to all concealed carriers, no matter your perceived skill level. If you encounter a hostile situation, you’ll most likely be defending yourself with a handgun. That’s definitely not the best choice, especially when compared to a rifle. This is because a pistol is a compromise between portability and performance.

Suarez International is known for its exceptional training courses, and it has also emerged as leader in customizing handguns to better deal with realistic tactical situations. The Suarez Guttersnipe Package for the Glock 43 is an excellent example of this.

The term “guttersnipe” harkens back to the iconic ASP handgun from the 1970s, where custom gunsmith Paris Theodore totally reworked the S&W Model 39 to excel in close quarters. The unique sighting system on the ASP, referred to as a “guttersnipe” sight, was a narrowing, triangular channel with fluorescent yellow panels. The sides all pointed at the target when the sight was properly aligned. It was a quick system.

What sets the Suarez package apart is the amount of testing and development that has gone into it. The Guttersnipe Package turns a G43 into a superior covert-carry handgun that excels in gunfighting—not just the reactive defense most often associated with smaller-framed handguns. For example, the gun is available with a Shield RMS reflex sight that is co-witnessed with tritium suppressor-height sights. Suarez has come to appreciate the British-made reflex sight for its ruggedness; Shield has over 30 years in the firearms industry; it’s sold tens of thousands of red dots sold to the British military. But more on this sight in a minute.

The Glock 43 can also be upgraded with a Suarez International match-grade barrel sporting 1/2×28-tpi muzzle threading. Suarez barrels are created from Lothar-Walther chrome-moly blanks and feature 1-in-10-inch twist rates. The Lothar-Walther blanks are machined here in the U.S. from a solid steel billet—almost three-quarters of the block is machined away to produce a single barrel. Then it’s finished in black Melonite inside and out.

Suarez also adds its own flat trigger, an important enhancement in terms of accuracy. Geometrically, flat triggers improve mechanical leverage. They also allow you to consistently place your shooting finger in the most advantageous position for consistent operation every time. The entire action of the Guttersnipe is also polished and tuned.

Finally, the polymer frame is textured by hand for enhanced purchase and retention. Various colors are available for the frame, including covert gray, black, white and coyote.

It’s become very popular to mount miniature reflex sights on handguns. Just think of the number of manufacturers that now offer guns with slides pre-cut for these optics. Most reflex sights are large, however, and would fit better on an offensive handgun than a viable inside-the-waistband concealed carry weapon. But the Guttersnipe G43 perfectly blends concealed-carry compactness with the red-dot capabilities of larger-framed weapons, so its performance exceeds its size.

Suarez International began work on handguns with reflex sights years ago to answer a question posed by many of the company’s students: how to enhance their primary method of defense—the handgun. Suarez International never advocates gear as a substitute for skill ingrained by training and practice, but Gabe Suarez felt that upgraded gear could assist in this particular quest. He quickly established himself as a leader driving the handgun-mounted reflex sight concept, both in theory and application.

Proficiency with a handgun is one of the most perishable gun-handling skills. This is further impacted as we get older, with changes in our vision causing increased difficulty in transitioning focus between sights and target. The solution Suarez arrived at was the same as most had already opted for with their rifles. The addition of a reflex sight to your AR or AK generally improves your shooting skills in terms of accuracy, speed and proficiency in engaging moving targets. While technically a little more challenging due to the size constraints of handguns, this is what Suarez decided on as the best course of action.

Competition handguns have sported enhanced sights, including red dots and magnified optics, for decades now. But the sights were typically big and ungainly affairs. Even the complex custom mounts used for competition are less than ideal for everyday carry. Thankfully, several companies are now offering smaller reflex sights that make pistols much more effective, and the Shield RMS is a perfect example.

Users of the Suarez Guttersnipe find that they no longer have to switch focus from the target to the sights. This invariably eliminates the front-sight focus so difficult for older shooters to overcome. They can now do as nature intends for them to do and focus on the threat. Moreover, because it’s far easier to pick up the red dot than three pieces of steel, users often find they can take shots beyond what was considered possible with iron sights alone. Hitting steel at 100 yards on the first shot is very possible with the Guttersnipe, as well as running CQB drills at times that were considered impossible to achieve before. All because the concept uses the eyes in a more normal manner.

One key part of the sighting system repeatedly stressed in Gabe’s writings and videos is having the red-dot co-witness with the handgun’s iron sights. There are many reasons for this. First, anything electronic can fail—no matter how rugged. Thus, it is important to have backup sights ready. Secondly, Gabe has discovered the fastest way to get on target is to locate the front sight with the red dot soon to follow. Lastly, the elevated irons around the red dot provide an instant verification that the optic is zeroed.

I tested the Suarez Guttersnipe at the Echo Valley Training Center (EVTC) in West Virginia. My first priorities were making sure the Glock was still as reliable as before. The Shield RMS also had to prove itself as a worthy addition. Another concern was being able to find the RMS’ red dot just as quickly as the tritium front sight.

The Shield RMS immediately assisted in engaging targets at close distances. The red dot proved easy to pick up rapidly and facilitated shooting with both eyes open. The Shield RMS made it easier to engage multiple targets in rapid sequence with faster transitions between targets compared to iron sights. At the same time, it provided adequate accuracy out to 100 yards. I was able to superimpose the aiming point on the target without obscuring it, as the dot isn’t overly large. Also, the Shield RMS, which weighs less than an ounce, withstood the recoil and heat generated by repeated long strings of fire.

To see if the Guttersnipe would still work for concealed carry, I used both DeSantis and Galco holsters during the testing. Holsters with generous open-cut tops were the easiest to use with the Shield RMS installed. My drills consisted of drawing from concealment to see if I could obtain the proper sight picture quickly. I also engaged various targets from behind cover and on the move. I reloaded the Guttersnipe often to get a feel for the gun and make sure the reflex sight’s red-dot reticle was easy to pick up and get back on target. As I learned rather quickly, the Guttersnipe has great potential in terms of accuracy, speed and extending effective engagement distances.

The ability to use the Suarez Guttersnipe G43 as an everyday-carry handgun is what sets it apart from other pistols topped with red-dot sights. Point shooting is still possible using the Shield’s window as a “ghost ring”—albeit a large one—if forced to react instinctively to a threat. The Shield RMS came into its own for precise fire at any range desired by placing the red dot on the target and applying correct trigger control. During speed drills involving plate racks and dueling trees, my run times were closer to those with a pistol-caliber carbine than a handgun. Another advantage of the Guttersnipe is it allows for the easy incorporation of a suppressor while maintaining the same sight picture.

The Suarez Guttersnipe G43 is a compact handgun that pushes the envelope while still maintaining real-world applications. It increases the effectiveness of a compact concealed-carry handgun beyond what most thought capable.

This article was originally published in “Concealed Carry Handguns” 2018 #211. To order a copy and subscribe, visit outdoorgroupstore.com. 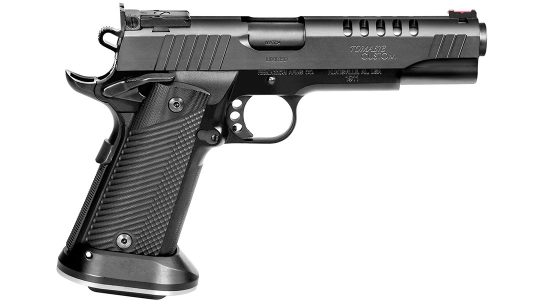 Remington's 1911 R1 Tomasie Custom pistol is USPCA and IPSC accepted and is an...