An armed Texas woman sent a would-be home invader scurrying after she pointed a revolver at him.

CBS affiliate KWTX reports that Laura Williams was at her home in Limestone County, Texas with her 17-year-old daughter Hannah, when she was jolted awake by the sound of her doorbell ringing. She answered the door, only to find a strange man standing in front of her with a shovel. The man asked about a woman who didn’t live at the home.

Williams told the man the woman didn’t live there. She then closed the door and peered through the blinds to see if the man had left. She observed the man standing at the opening of the woods in the front of her house, but he kept looking back.

Williams grabbed a revolver out of her bedside table and went to confront the intruder.

“I had time to grab the revolver and come out the door. So when he came in the shovel was up on his shoulder, he was headed straight towards us,” she told KWTX. “I aimed it at him and said, ‘If you take one more step I’ll kill you.'”

Those words stopped the man in his tracks. He immediately turned to leave the house, but he turned to face Williams once again.

“He said, ‘Well all y’all need to know is y’all need to leave me the F alone,’ and I said ‘I don’t even know you, get out of my house.'” Williams recalled.

The man finally left for good. Williams called 911 while she observed him walking into the woods with the shovel in his hands.

Deputies arrived on the scene 14 minutes later and scoured the area, eventually locating the suspect in a trailer park nearby. He was arrested and identified as 47-year-old Allen Tompkins.

FOX8 reports Tompkins has been charged with burglary of a habitation and taken to jail on a $20,000 bond. 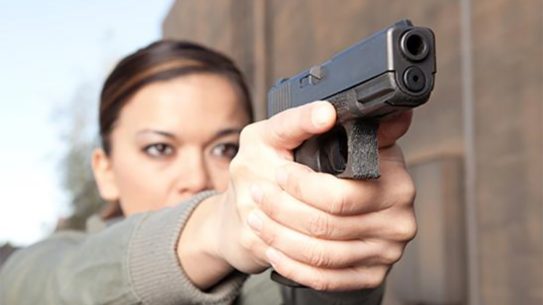 A new gun owner in North Carolina opened fire on a man who attempted...