by Michelle Cerino
in Guns, Rifles
0

"Shooting these guns is easy, but good handling skills will give you the speed, comfort and confidence you need to hunt, compete or defend your loved ones."

I’ll admit, learning a new firearm platform can be somewhat scary. Back in the day, I was very comfortable with my pistol, but eventually I needed to broaden my horizons. It was time for me to begin shooting an AR. Since then, I’ve trained quite a few people on the platform, including a recent group of women at the A Girl and A Gun National Conference. During the class, before we actually started using live ammo, I took time to review the parts of the AR so everyone felt more comfortable. I figured if these ladies were anything like me, they’d want to know the ins and outs or “hows and whys” first. I want to share with you some of what I shared with them, and a little more. 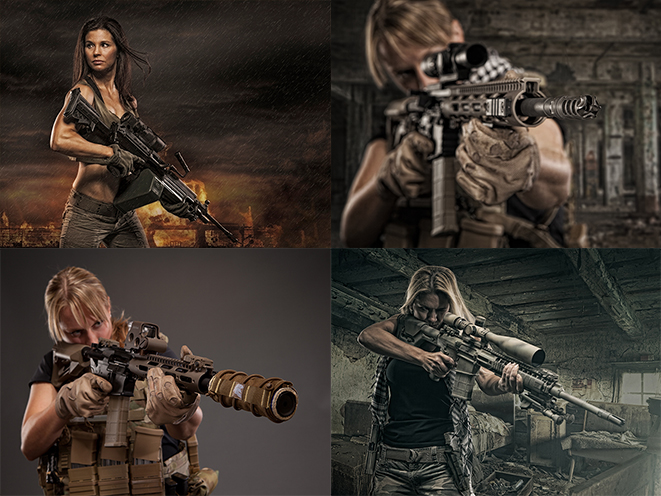 People call it many different names: assault rifle, black rifle, automatic rifle, America’s rifle, Armalite Rifle and, lately, modern sporting rifle. Though not all of those names are flattering, they all refer to the same firearm platform, the AR. So, what do those letters stand for? The answer is Armalite Rifle. Eugene M. Stoner originally designed the rifle in 1957 while serving as the chief engineer for Armalite.

There are two basic categories in the AR world. AR-15 rifles are the most common; they’re generally chambered for the .223 Remington or 5.56mm NATO. Then you have AR-10-style rifles that come in larger calibers, and most often in .308 Winchester/7.62mm NATO. For our purposes, we’re going to refer to the popular AR-15 here, even though the two types don’t differ much other than size.

Each AR-platform rifle can then be broken down into two basic components: the upper receiver group and the lower receiver group. Most commonly referred to as the “upper,” this half contains the barrel, handguard, bolt carrier group, charging handle, ejection port and dust cover. The “lower” houses the trigger group and also features the pistol grip, magazine well, buttstock and buffer tube, which contains the mainspring and buffer. The lower receiver is the serialized part, which means this is legally the “firearm.” All of the other parts can be purchased without going through the Federal Firearms License (FFL) paperwork.

Barrel: What’s the difference between a rifle and a carbine? It’s a common question. Long guns or ARs with barrels 20 inches or longer are generally referred to as rifles. Those with barrels shorter than 20 inches are called carbines. You’ll often hear the names used interchangeably without cause for concern. You’ve also probably heard someone use the abbreviation “SBR.” This stands for “short-barreled rifle,” which covers any rifle with a barrel shorter than 16 inches and requires a $200 federal tax stamp and approval from the BATFE.

For some, the rifling “twist rate” is a big consideration and often a hot topic. Rifling puts spin on the bullet before it leaves the barrel, and the twist rate refers to how quickly a projectile will spin one full time before leaving the tube. In simple terms, the twist rate means the barrel is designed to work with a specific bullet weight. In most store-bought ARs, this isn’t really an issue. However, people who build their own rifles are very particular about it, as they want a specific twist rate for their particular bullets.

Muzzle Devices: If your barrel is threaded, you’ll probably find one of two things at the front end: a muzzle brake or a flash suppressor. A muzzle brake aids in managing recoil, which, in theory, allows for faster, more accurate follow-up shots. The more common flash suppressor reduces the flash signature. This came from the military world so people couldn’t see where shots were coming from. It’s also a benefit when shooting in low light so a fireball doesn’t rob you of your night vision. The biggest difference between flash suppressors and muzzle brakes is that the latter is much louder.

Handguard: The handguard, or forend, shrouds the barrel and gives you a place to hold with your support hand. On ARs, it sometimes hosts the front sight and offers additional space to mount accessories like flashlights, lasers, foregrips and more.

Bolt Carrier Group: The bolt carrier group (BCG) consists of the carrier, bolt, cam pin, firing pin and firing-pin retaining pin. It is the heart of the AR system. In addition, the BCG is responsible for chambering, firing and ejecting rounds. BCGs come in a variety of weights and finishes. Furthermore, it is quite often the most disputed part of the gun next to barrel choice.

Charging Handle: The T-shaped handle at the back of the upper receiver is used to pull the bolt carrier back to chamber a round. Its sole job is to cycle the BCG in the upper. Used for loading, unloading and clearing malfunctions, the charging handle has a big responsibility.

Ejection Port: The ejection port is where the spent casings eject from. Not always found on the latest versions, the dust cover is used to keep the elements out when the gun is not being fired. I suppose it is much more relevant in a military or combat environment. But there are competitions where the dust is so bad I keep mine closed to avoid problems.

Trigger Group: Generally composed of many individual parts, pins and springs, the trigger group can be difficult to disassemble or install for a novice. Thankfully, there are many new “trigger packs” that come preassembled and are easy to install. No matter which you have, triggers are generally broken down into two categories: single-stage or two-stage. A two-stage trigger has significant movement before you release the hammer. Some people refer to this as the “slack” or “take-up.” On the other hand, when pressing a single-stage trigger, there is usually no pre-travel or slack. Once the correct amount of pressure is built up, the hammer is released. Trigger weight refers to the amount of pressure that needs to be applied before the gun fires. From 12 pounds to mere ounces, the choice is yours. 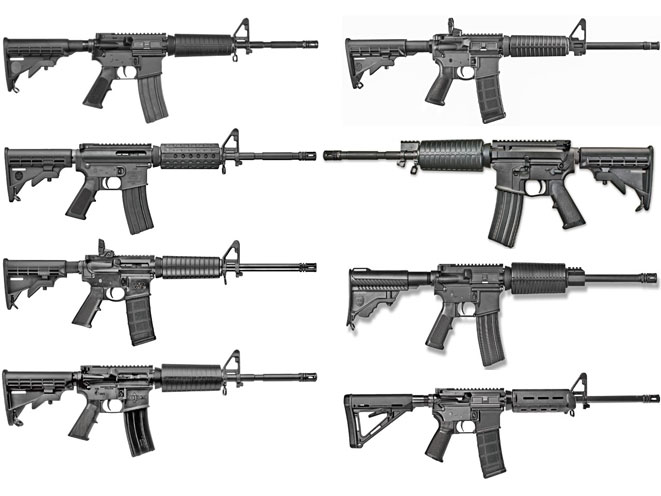 Buffer Tube: The buffer tube houses the mainspring and the buffer, and the buttstock is installed on it. These pieces dampen the recoil as the BCG moves when firing. There are carbine- and rifle-length buffer tubes with commercial or mil-spec diameters. They all function the same but have different dimensions.

Buttstock: There are two types of buttstocks: fixed or adjustable. This is simply the part of the rifle that comes in contact with your shoulder when firing.

Pistol Grip: AR grips are usually made from hard plastic, but just like those on handguns, you can get them in a variety of materials, textures and sizes. This is where your strong hand (the one pressing the trigger) holds onto the gun, so this component is important.

Magazine Well: Again, similar to a pistol, this is the area where you insert the magazine containing your ammunition. There is not generally much difference between AR magazine wells, although some folks will modify them for easier magazine insertion.

Without a doubt, ARs are the most customizable firearms available in America today, surpassing the 1911 platform. In addition, there are standard ARs out there that anyone can take out of the box and head right to the range. For many, though, standard is never enough. There are so many choices for modifications, accessories, colors and add-ons to choose from.

As with any other firearm platform, it just takes some practice and getting used to. Be sure to develop good handling skills or “motor programs” when shooting and handling your AR. Shooting these guns is easy, but good handling skills will give you the speed, comfort and confidence you need to hunt, compete or defend your loved ones. So remember: