VIDEO: The Auto-Ordnance Victory Girls 1911 Gets a Range Workout

A few months ago, Auto-Ordnance unveiled its Victory Girls 1911. The gun pays tribute to the women who bolstered industry here in the United States while our boys fought the Axis powers overseas during World War II. Here’s the description of the gun, via the product listing on Auto-Ordnance’s website: 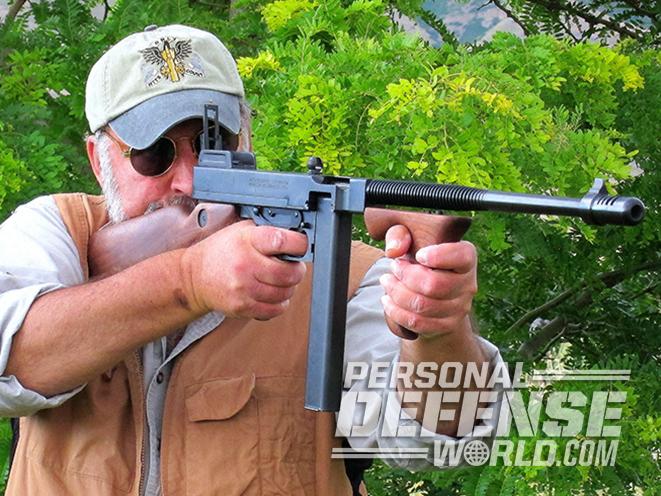 Beginning with a base 1911A1 GI Model in .45ACP, it has the standard 5” barrel, seven round magazine, and US property logo wood grips. The Victory Girls model is then customized with deep cut laser engraving of a pin-up girl on the right side, and an updated “Rosie the Riveter” on the left. It also features the USAAC Star Roundel on both sides of the frame. The pistol is then given a worn look with a two color Cerakote finish of Armor Black and Gunmetal Grey to resemble a World War 2 Fighter Plane

The Auto-Ordnance 1911BKO frame incorporates GI specs, and features a matte black finished frame, barrel, and slide. The carbon steel slide, sear, and disconnector are machined from solid bar stock, then heat treated properly to assure durability and long life over many thousands of rounds. The low-profile sights feature a blade front sight and a rear drift adjustable for windage. The grip is brown checkered plastic, with wood optional on the 1911BKOW model.

Sure, that all sounds great, but how does it run? Our friend Graham Baates decided to find out. In the video above, Graham runs through his usual battery of tests. He starts out with a full mag +1 test from about 17 yards out. He then does his “What’s for Dinner” test. For that, he uses Federal’s 165gr Hydra-Shok; Winchester’s 230gr Winchester PDX1 Defender; 185gr Sig V-Crown; 185gr Legend Pro; Hornady’s 185gr FTX Critical Defense; and Remington’s 185gr Golden Saber. Lastly, Graham conducts a field accuracy test, shooting five rounds from seven yards out using Nosler 230gr Match.

Watch out the video above to find out how the Auto-Ordnance Victory Girls 1911 did on the range. Check out the specs on the gun below.