Tick-Tock: Less Than a Week Left to Register Bullet Button Rifles in CA

As previously reported, a bullet button is a device that can only be pressed using a tool in order to achieve a magazine release. Designed as a workaround for California’s detachable magazine ban, the state passed a law banning ownership of rifles equipped with said device, but rifles owned prior to the law getting passed were grandfathered in, provided they were registered with the state before midnight on Saturday, June 30.

Evidently, the DOJ’s website was unable to handle the traffic, causing outages and preventing law-abiding gun owners from registering their bullet button rifles.

A press release issued by the California Rifle & Pistol Association (CRPA) advised gun owners to keep detailed records of registration attempts, “including screenshots, pictures, or videos, indicating the date and time of your attempts.”

The organization also advised Californians to disassemble their firearm until receiving confirmation from the DOJ that their registration was accepted, “or that you will be allowed to resubmit it after the deadline, due to the website crashing.”

Meanwhile, CBS San Francisco reported that the California registration system wouldn’t recognize some firearm parts. Jay Jacobson, the owner of Franklin Armory, said one of the firearms he tried to register got rejected three times.

“I believe they may be calling this a telescoping stock. It’s only a fixed stock, it’s only minutely adjustable,” Jacobson said. “Other than that, I can’t figure out why they have not allowed this to go through and what is frustrating is they don’t bother to tell you.

“Everybody that’s doing this is doing so to comply, they have a willingness to follow the law. And yet they’re making it as difficult as possible,” Jacobson added.

Jacobson said he’s been trying to complete his registration since April.

“Operator 202 had mentioned to me the process can take 8-12 weeks and that their department counsel is not aware what will happen with those that submit before the deadline but don’t have it approved before the deadline,” said Jacobson. “So I don’t know what’s going to happen to those folks, which could include myself at this point.”

CRPA and the NRA said they’ll work with the California DOJ to come up with a solution for people in that position. 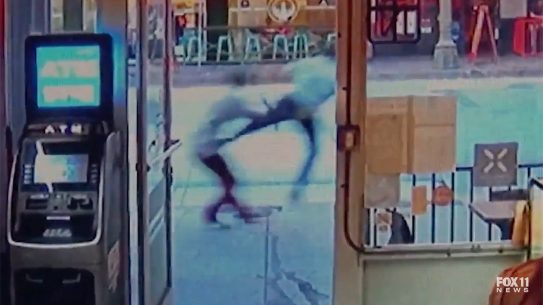 A good samaritan used a flying kick to stop a homeless man who used...

Seattle Citizens on Their Own After City Council Bans Less...