A good samaritan used a flying kick to take down a homeless man who violently attacked another man using a piece of plywood with a metal nail stuck in it in downtown Los Angeles earlier this week. Check out the video showing the takedown above. 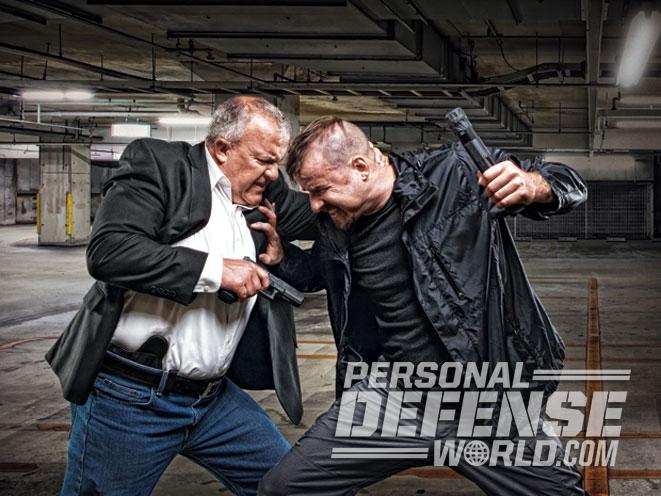 Fox 11 Los Angeles reports that the victim was out walking his dog on Monday evening when a transient suddenly approached out of nowhere and struck him in the face with the plywood.

A bystander saw it all go down; the surveillance footage shows him running up and hitting the suspect with an impressive-looking flying kick to the stomach right as the man is moving to attack another person.

Corey Smith, who lives in the area, told Fox 11 he heard noises outside and saw the good samaritan kick the suspect.

“One of my neighbors was bleeding and I tried to figure out what was going on with the situation really quick and apparently a homeless dude had hit him in the face with a two by four with a nail in it,” Smith said.

After the good samaritan kicked the homeless man, Smith and a group of other men chased him down the street.

“I told him, ‘you know you’re going to jail, this is a citizens arrest, don’t move, the cops are coming,'” Smith recalled. “He turned around and said, ‘f**k you, get out of the way’ and turned to take off and one of the gentlemen I was with tackled him.”

Police soon arrived on the scene and placed the homeless man in handcuffs. He remains unidentified.

The victim, identified only as Mikhail, is currently in the hospital. Fox 11 said he has a “severe gash” on his lip.

“His injuries were very very graphic, very tough to look at and try to hold a conversation with him, very large gash on his lip where his lip was slightly hanging,” the victim’s friend Claudia Oliveira said.

Mikhail will need plastic surgery as a result of the attack, friends told Fox 11.