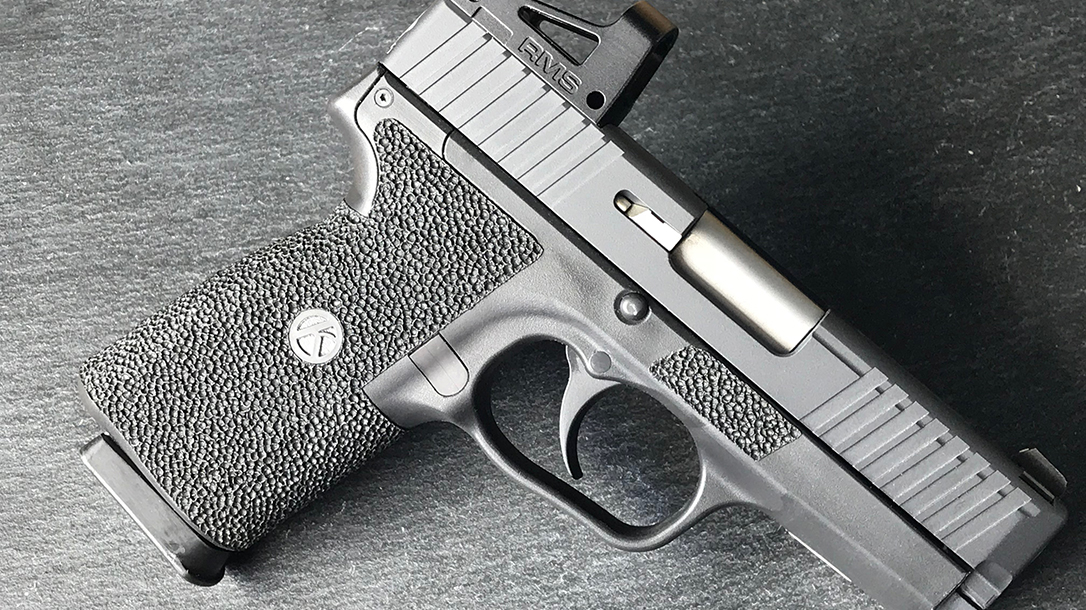 1 of 9
Review: Amping Up a Kahr P9 With These 4 Customizations
“Kahr Arms makes superb concealed-carry pistols, but with a few functional additions, these guns can be custom-tailored to meet your needs perfectly.” 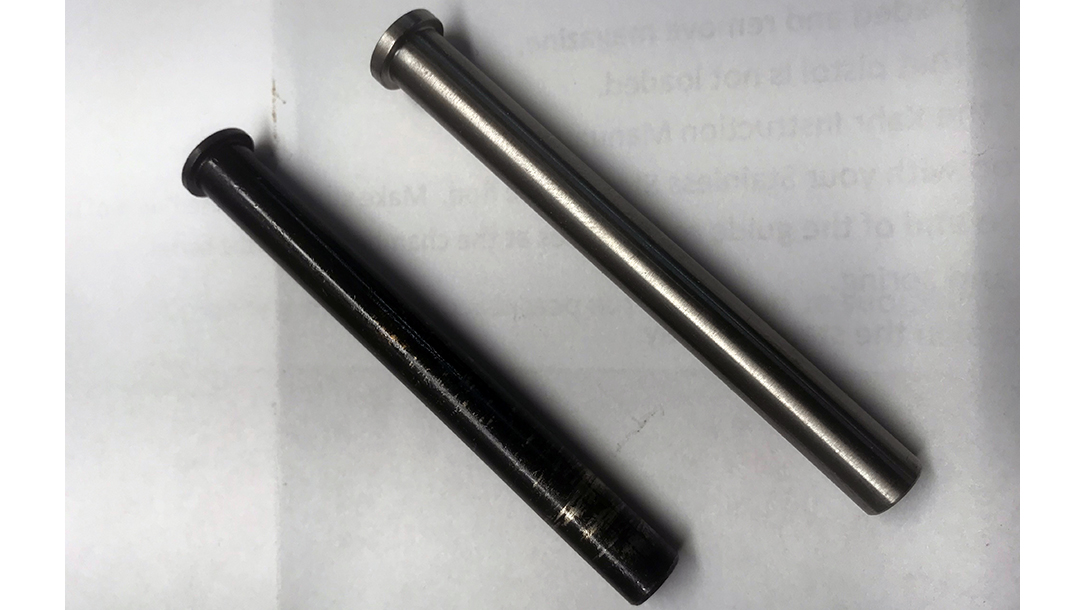 2 of 9
Review: Amping Up a Kahr P9 With These 4 Customizations
The author replaced the standard guide rod (left) with a more durable stainless steel model (right) from Lakeline LLC. 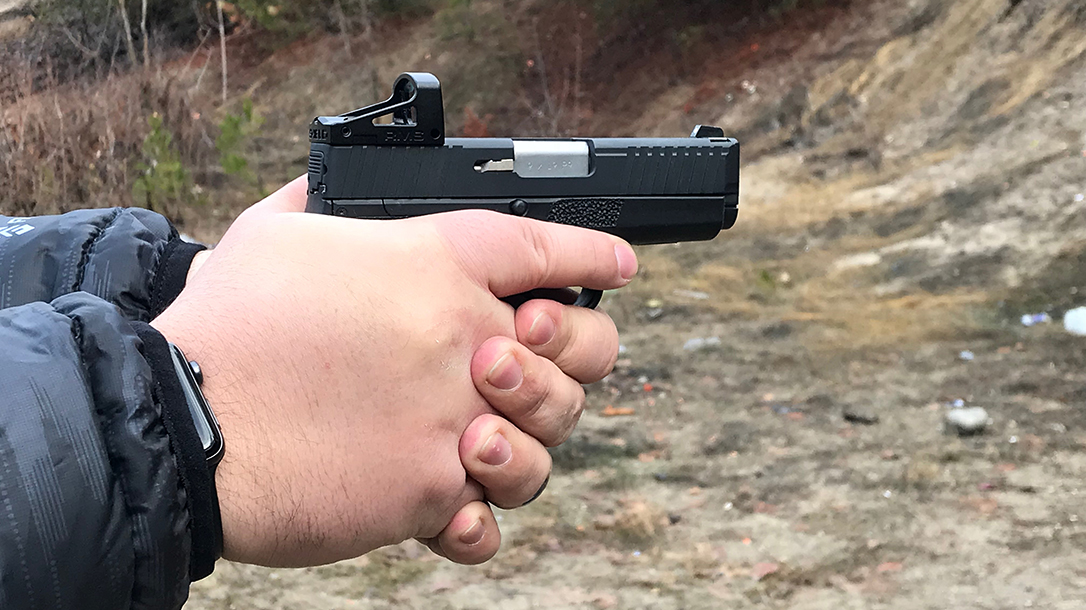 3 of 9
Review: Amping Up a Kahr P9 With These 4 Customizations 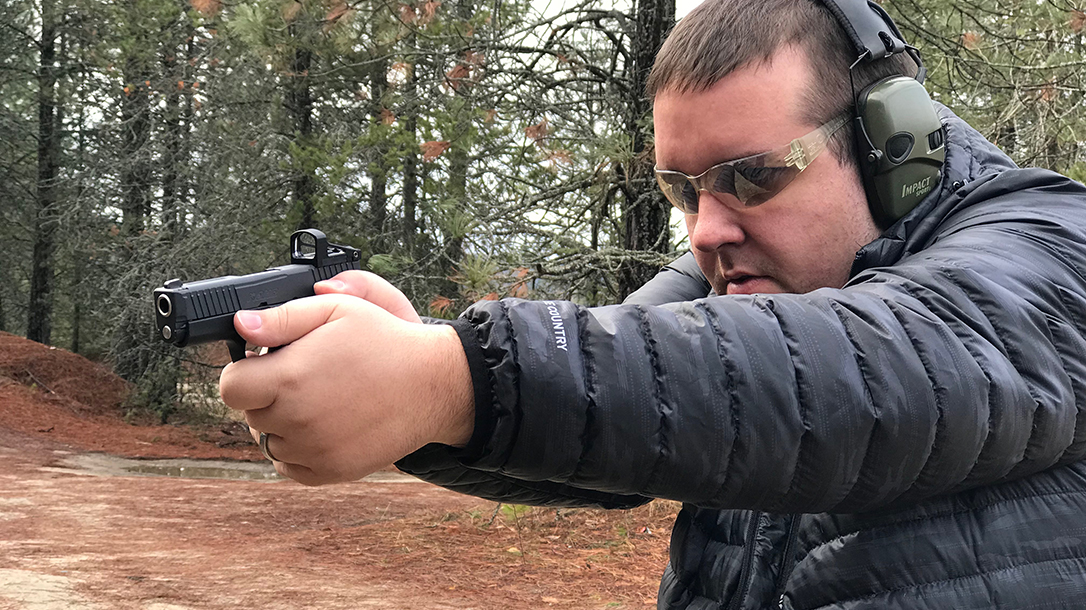 4 of 9
Review: Amping Up a Kahr P9 With These 4 Customizations 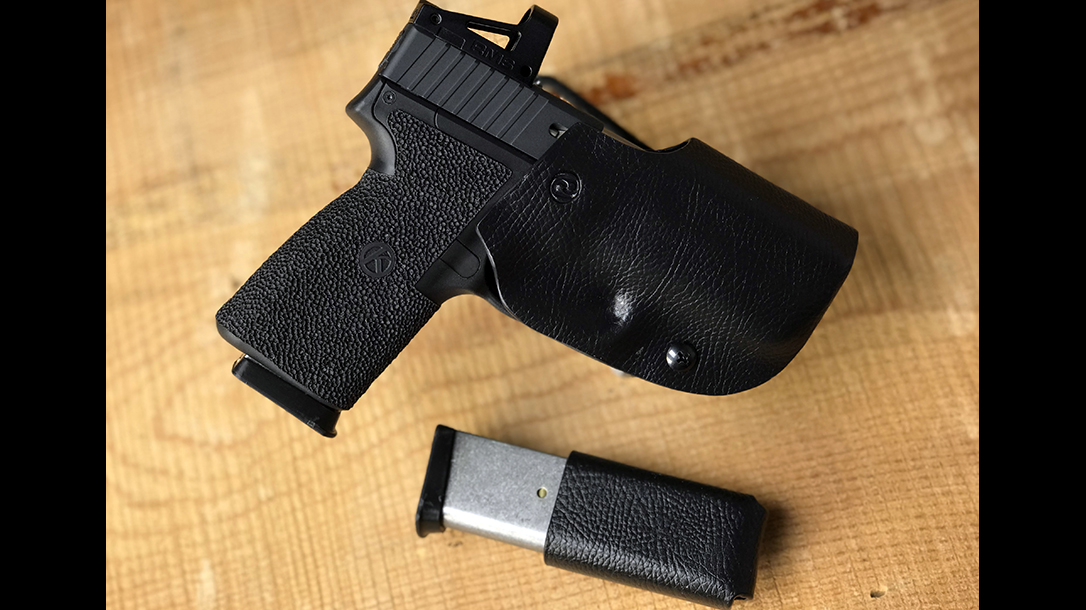 5 of 9
Review: Amping Up a Kahr P9 With These 4 Customizations 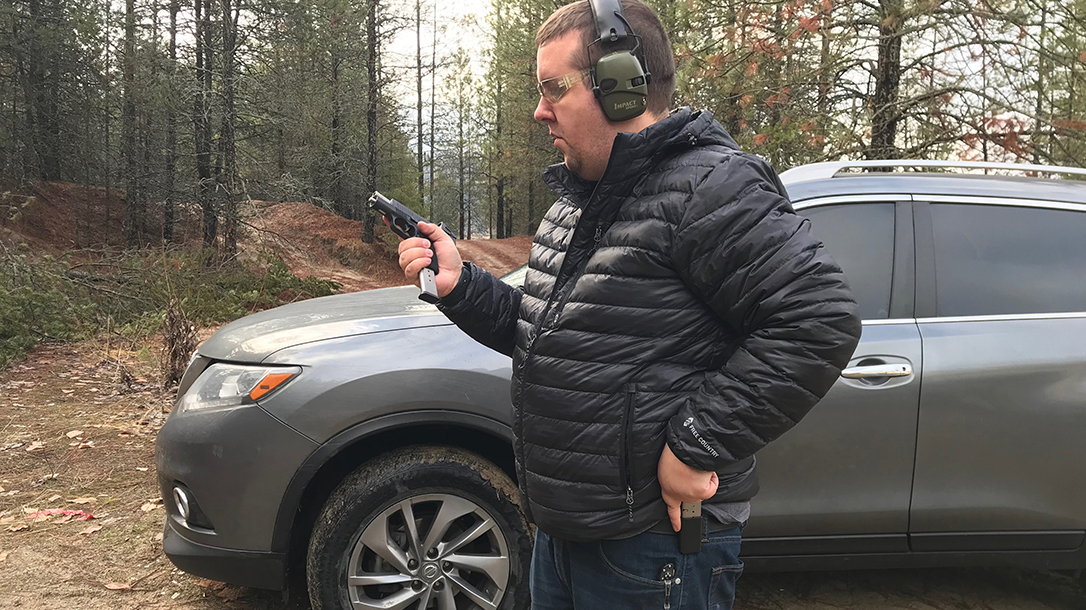 6 of 9
Review: Amping Up a Kahr P9 With These 4 Customizations 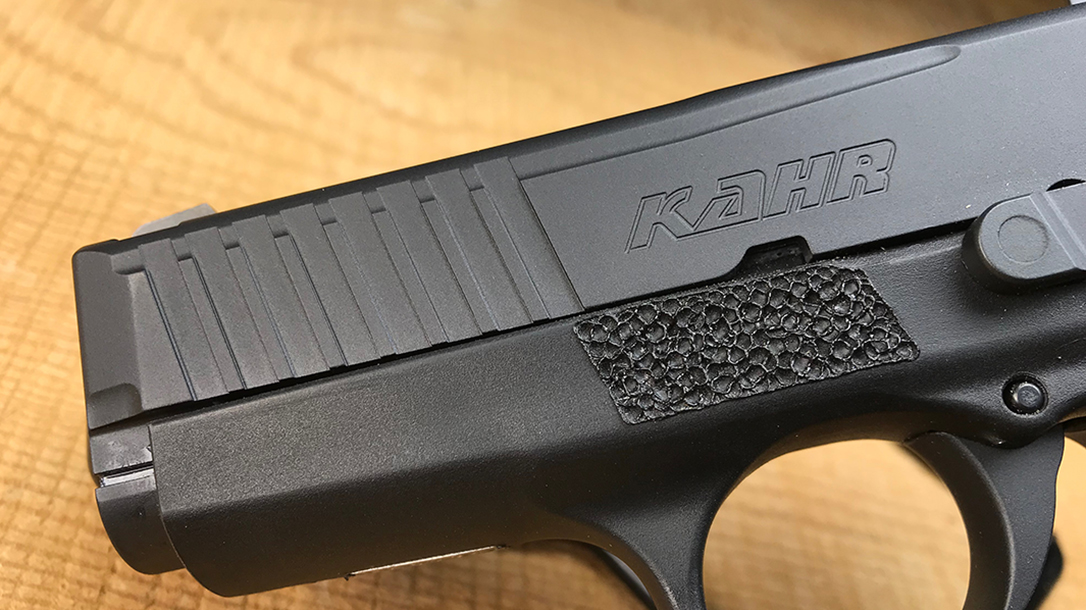 7 of 9
Review: Amping Up a Kahr P9 With These 4 Customizations 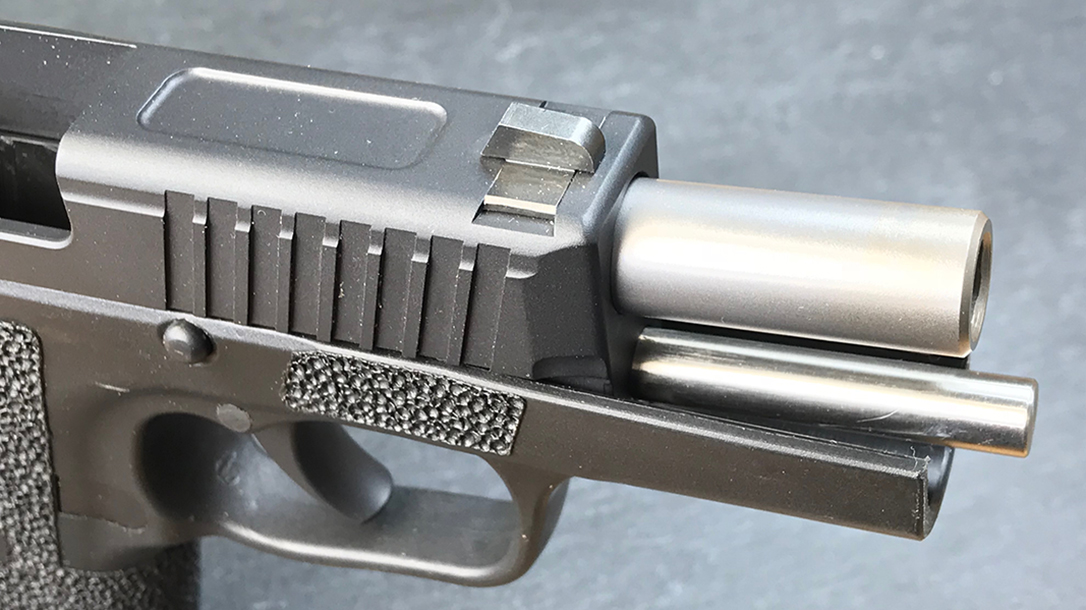 8 of 9
Review: Amping Up a Kahr P9 With These 4 Customizations 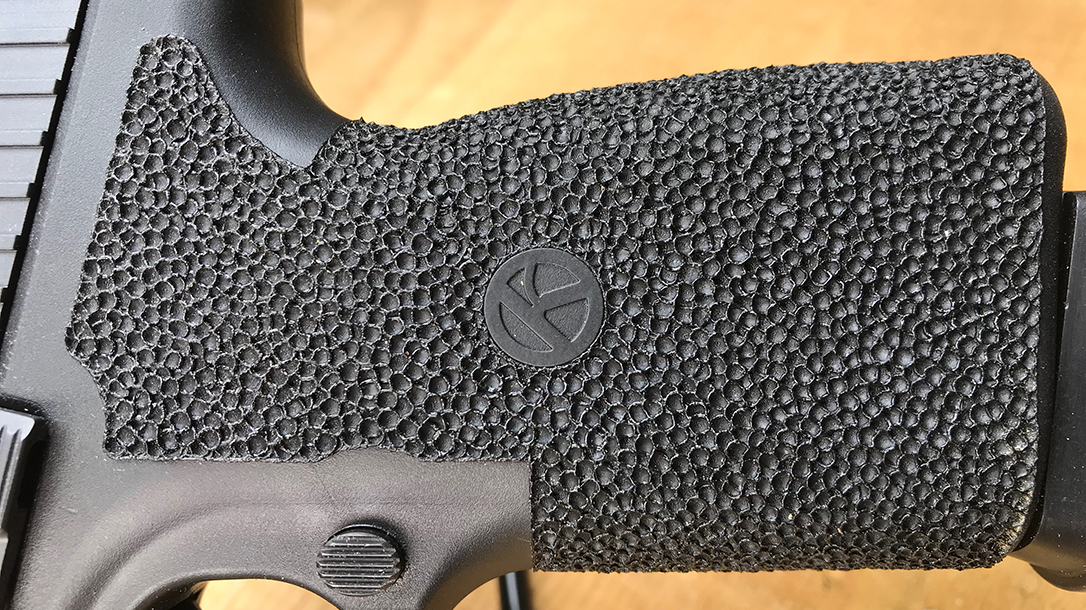 9 of 9
Review: Amping Up a Kahr P9 With These 4 Customizations 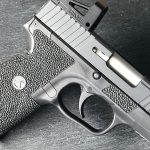 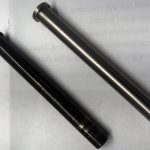 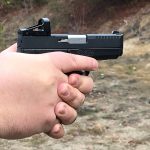 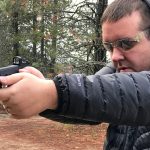 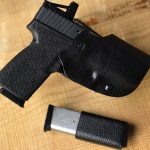 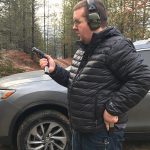 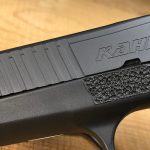 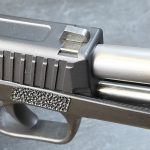 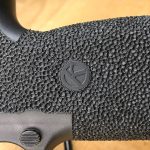 Kahr Arms has been known for making prime examples of concealed carry-friendly semi-auto pistols since 1995. The company’s current lineup stays true to its core characteristics: quality craftsmanship and thin profiles. 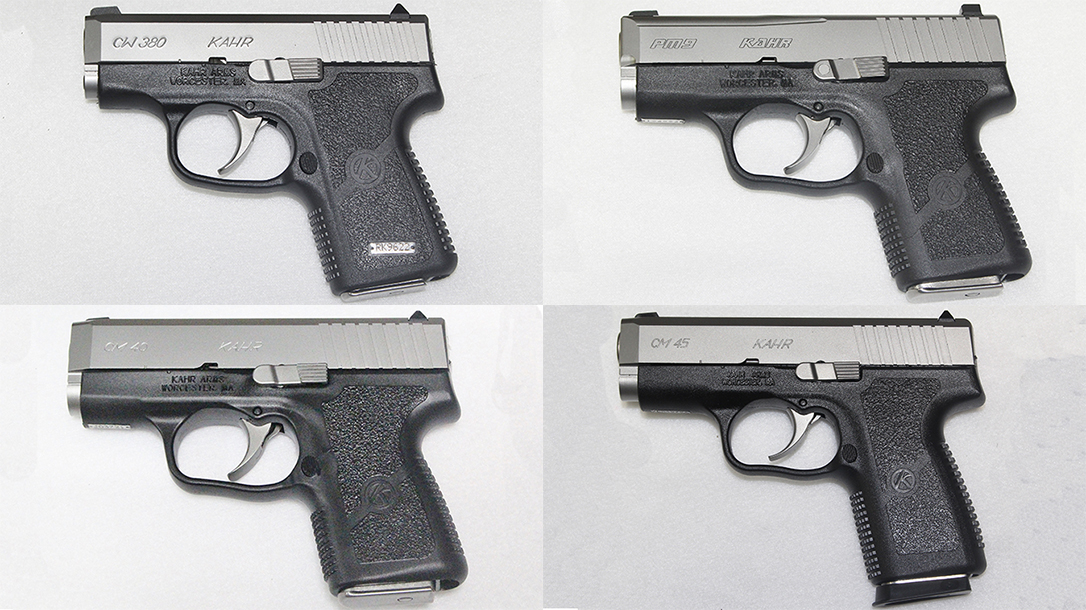 One way Kahr achieves such thin profiles with its guns is its unique offset barrel lugs. Most pistols have lugs centered along the axis, requiring the trigger mechanism to be moved behind them. Kahr’s offset lug system allows the trigger mechanism to occupy the same space, providing a more compact package. The company also use a cocking cam trigger system that unlocks a passive safety and releases the firing pin. This camming action creates one of its signature features: the smooth trigger. Kahrs are known for their long, smooth trigger presses. Once you become accustomed to the press, it’s just wonderful.

The CM9 and PM9 have become some of Kahr Arms’ most popular concealed-carry pistols. Their short grips and slides, coupled with their thin profiles, make them an obvious choice. The CM9 and PM9 both pack six rounds into flush-fitting, stainless steel magazines. On the other hand, the P9 gives you a barrel over half an inch longer as well as an extra 9mm round on tap. I chose to customize the P9 specifically because it comes with a polygonal-rifled barrel and enhanced slide machine work, but the same modifications can be made to most of Kahr’s lineup.

Pike Spraggins has been customizing pistols since opening MOD 1 Firearms in 2012 after a law enforcement career spanning 20 years. I’ve admired his craftsmanship since meeting him. Pike churns out countless Glocks and S&W M&Ps, so the P9 was a nice change of pace. This is the second Kahr pistol I’ve had him work his magic on, and I’ve been left speechless every time.

The frame was the first item to tackle. From the factory, the grip provides tame side texturing, but the front- and backstrap are aggressive. This makes sense for its intended usage. The tame side panels prevent snagging on clothing or scratching skin. The aggressive front- and backstrap texturing provides bite and grip when the pistol is fired. Unfortunately, a long practice session leaves my hands worse for wear.

Pike stippled the polymer frame, providing an even, uniform texture. There is enough traction to be confident without being uncomfortable after a range session. The attention to detail in the lines is a good indicator of the quality of work Pike performs.

While the CNC mill was removing material from the Kahr’s slide, the end mills made their way to the top rear of the slide. They removed just enough material to allow a Shield RMS reflex sight to be nestled in where the factory rear sight once lived.

After the slide was machined, it was thoroughly deburred and then cleaned in an aluminum-oxide blast cabinet. Next, it was given a dark gray Cerakote finish. This color is a special blend done by MOD 1 that sets itself apart from all the standard Cerakote offerings. The ceramic- based coating provides protection and mutes the factory slide’s silver color. But the slide wasn’t the only part to get this special treatment. The slide stop lever and trigger were also coated before reassembly. The customization work on the P9 would run most people around $479. That includes inletting the slide for the reflex sight, adding forward cocking serrations and other slide enhancements, stippling the frame and applying Cerakote.

The Shield RMS is unique in that it provides an integrated rear sight channel. This eliminates the more traditional requirements of mounting the optic in front of the rear dovetail and installing taller iron sights. The RMS was inlet into the slide as deep as the slide’s internals would allow. There was still around a 0.1-inch difference in where the factory rear sight had been, so Kahr sent me a slightly taller front sight. This ensures that the RMS’ integrated rear and new taller front sight would still have the same point of impact as the factory sights.

The RMS has a few other features worth mentioning. The sight is designed so you can replace the CR2032 battery without having to remove the optic from the slide. In addition, the aluminum body provides a tough exoskeleton for the electronics housed inside. The RMS is also only 1-inch wide and weighs a paltry 0.61 ounces. It is thin enough to fit on most single-stack 9mm pistols like the Glock 43 and S&W M&P Shield without adding much to the profile. Many competing red dots are simply too large to fit on these pistols properly.

Weight also matters on a pistol meant for daily carry. Adding the weight of a red-dot sight can adversely affect the slide’s functioning. Gun manufacturers tune the recoil spring weight to work with the slide weight and most common ammunition. When you change the slide weight too much one way or the other, the recoil spring is no longer tuned properly. The machine work that was performed on this slide offsets the extra weight nicely, and no negative side effects were noted. In fact, with the machine work done to the slide, adding the optic only increased the slide weight from about 8.915 to 8.918 ounces.

This is designed to be a carry pistol, so a quality holster was required to make the experience enjoyable. PJ Holster was started in 2011 with the goal to make holsters simple, practical and affordable. This company has been my concealed-carry holster provider of choice ever since I moved to a CCW state. Depending on weather and clothing choices, I alternate between the company’s inside-the-waistband and outside-the-waistband holster models.

PJ’s design choice of building its holsters from single sheets of Kydex yields a holster with no extraneous screws, weight or bulk. Its designs are as minimalistic as you can get while providing whole-gun coverage, belt clips and proper gun retention. The outside-the-waistband example shown here boasts a Black Raptor Tactical finish along with a 1.5-inch belt clip. PJ also provided a matching magazine carrier. I’d always recommend carrying an extra magazine, especially while carrying a single-stack pistol with a limited capacity.

The last two additions to the pistol before it hit the range were both from Lakeline LLC. This company sent me a stainless steel guide rod and machined aluminum magazine followers. The aluminum followers have an improved shape that aids in feeding the rounds more reliably. They also prevent the top round from popping out—something many who carry spare Kahr mags have experienced. The metal design is also more robust than the Kahr factory plastic components. The factory plastic follower relies on a metal insert to catch the slide stop when the magazine runs dry. The metal version can’t fail there. 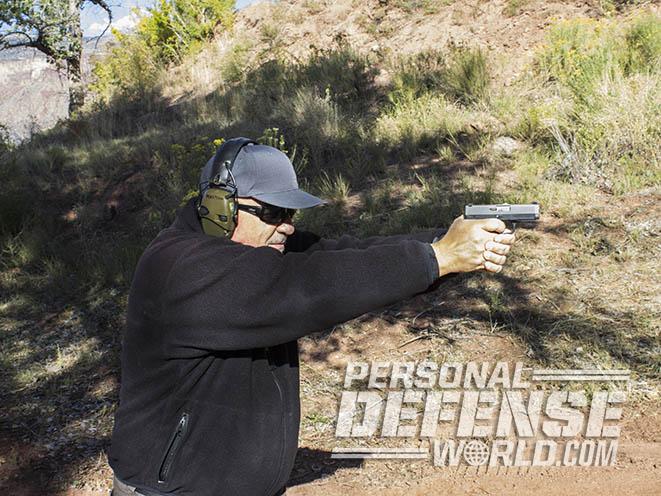 The guide rod is machined from 316 stainless. It is harder than the factory rod, which helps prevent the spring from gouging the rod. Not having a gouged rod makes the action feel smoother in operation. Both parts are cheap insurance against letting some small issues detract from an otherwise top-quality pistol.

Top of the Line

A pistol can look like a million bucks, but if it shoots like a $2 bill, it is pretty much worthless. Thankfully, this custom Kahr P9 shoots better than its price would dictate. The barrel, produced from a Lothar Walther blank, provides excellent accuracy.

I tested the pistol with Speer 124-grain and Blazer Brass 124-grain ammo. All of the ammo provided satisfactory results and functioned properly. The gun was previously broken in with Speer 124-grain Gold Dot hollow points before any custom work was performed. It was deemed carry ready at that time. No malfunctions were experienced in testing after all the work was finished. Testing outside in subfreezing temperatures was less than ideal, but even so, the P9 managed 1.06- and 0.97-inch groups with the Blazer Brass and Speer ammo, respectively, off-hand at 10 yards. For a concealed-carry pistol, I found that more than adequate. With more ideal conditions and a supported position, I’m confident the gun would be shooting near cloverleaves.

The Shield RMS allowed a full trigger press as soon as the dot was on target. Using traditional iron sights, you have to wait until the front and rear sight are aligned, then focus on the front sight awhile initiating the trigger press. The single-plane nature of red dots eliminates the need for alignment. If the dot is on target, you are free to fire.

Kahr Arms makes superb concealed-carry pistols, but with a few functional additions, these guns can be custom-tailored to meet your needs perfectly. With a little help from MOD 1 Firearms, Shield, PJ Holsters and Lakeline LLC, I now have a superb custom solution.

This article was originally published in “Concealed Carry Handguns” 2018 #211. To order a copy and subscribe, visit outdoorgroupstore.com. 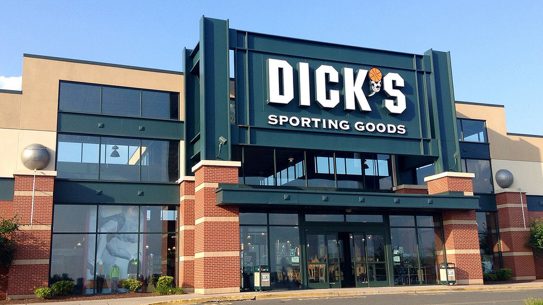