A gunfight between a Georgia man and armed robbers in a Kroger parking lot ended with the suspects hospitalized with gunshot wounds.

DeKalb Police spokeswoman Shiera Campbell told WXIA it all started when a couple was shopping at the Kroger store at around 4:15 p.m. on Friday afternoon. At some point during their shopping trip, a group of men started following them. The couple made their way out to the parking lot, where they were suddenly accosted by the men.

“Whether it was a robbery or a carjacking, we don’t know right now. It’s still too early on in the investigation to say,” Campbell said.

Either way, the man being followed managed to draw his handgun. A “large amount of gunfire” ensued between the man and the group that was following him. Two suspects were shot. A third person, allegedly an innocent bystander, was also hit by a stray round. The couple was uninjured. A number of vehicles in the parking lot were hit by rounds as well.

“It was like the Wild Wild West. I was terrified,” said Angela Key, who was sitting in her car as it was hit by bullets. One suspect reportedly used her car as a shield while he returned fire. “I’m just glad I’m safe.”

Fox 5 Atlanta says one of the suspects managed to re-enter the Kroger, which is when an employee called 911.

“There was a trail of blood. He dragged himself into Kroger. It was awful, awful,” one customer recalled.

We’ve seen conflicting reports on the number of suspects involved in this incident. Most news outlets say three bad guys were involved, but the most recent articles state that two men have been charged. Those suspects have been identified as Andrew Banks, 23, and Austin Harris, 18. Both are facing two counts of aggravated assault and theft by taking.

Police think the suspects randomly targeted the couple; there is no prior history between the two parties.

The couple, along with multiple witnesses, have been interviewed by investigators. It doesn’t appear as though they’ll be facing any charges for defending themselves against the armed attackers. 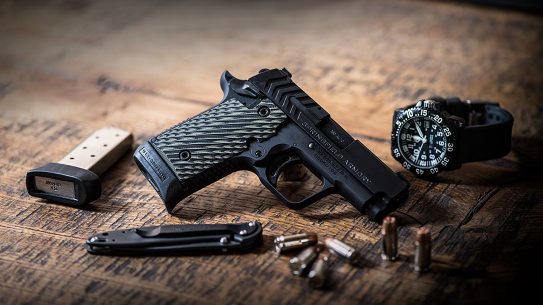 The Springfield 911 for EDC and backup, first introduced at the beginning of the...