The Los Angeles County Sheriff’s Department seized more than 500 firearms from the home of a convicted felon who is reputed to be a collector last week. 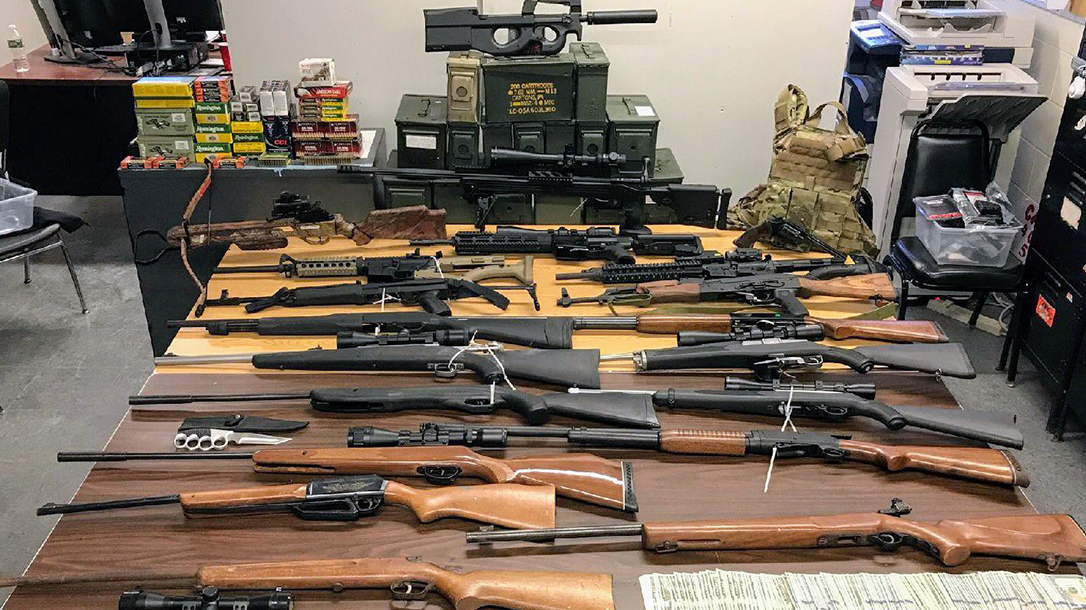 The bust got set into motion when the LASD Palmdale Station got a tip that a man in Agua Dulce—an area 44 miles north of Los Angeles—had a “large arsenal” of firearms. The tipster also mentioned that the man was a convicted felon, which would prevent him from legally owning any firearms at all.

On June 14, a team that included investigators with the LASD Palmdale Station, the ATF and the California DOJ executed a warrant on the home of 60-year-old Manuel Fernandez. 432 firearms were discovered inside the residence, including pistols, revolvers, rifles and shotguns.

Through the course of the investigation, authorities discovered a second home in Agua Dulce connected to Fernandez. Police obtained a warrant for that address. When the home was searched, police found 30 firearms owned by somebody the LASD refers to as a “female associate.” The woman wasn’t home when the warrant was executed; she hasn’t returned to the address. The LASD is preparing to file charges against her.

A follow-up warrant to Fernandez’s home the next day led to the seizure of 91 additional guns. The guns were hidden at various spots throughout the home. Investigators also seized computers, cell phones and hard drives believed to have been used by Fernandez to make the gun buys.

All told, 553 guns police seized during the investigation.

LASD detectives have called upon the ATF for help tracing the “purchase origination” of the guns.

“This case is a testament to the community’s involvement in reducing crime and taking guns out of the hands of criminals,” said Los Angeles County Sheriff Jim McDonnell. “The swift response … showed the positive result of our campaign ‘See Something, Say Something.'”

According to the Los Angeles Times, “sources familiar” with the case say Fernandez is a gun collector, as opposed to somebody “about to use the guns for violence.”

The LASD statement doesn’t state the nature of Fernandez’s previous felony conviction. ABC News cites jail records that say Fernandez was sentenced to 486 days in jail for an “unspecified” felony conviction in February 2017. He was released in August 2017.

Fernandez is due to appear in court on July 9.