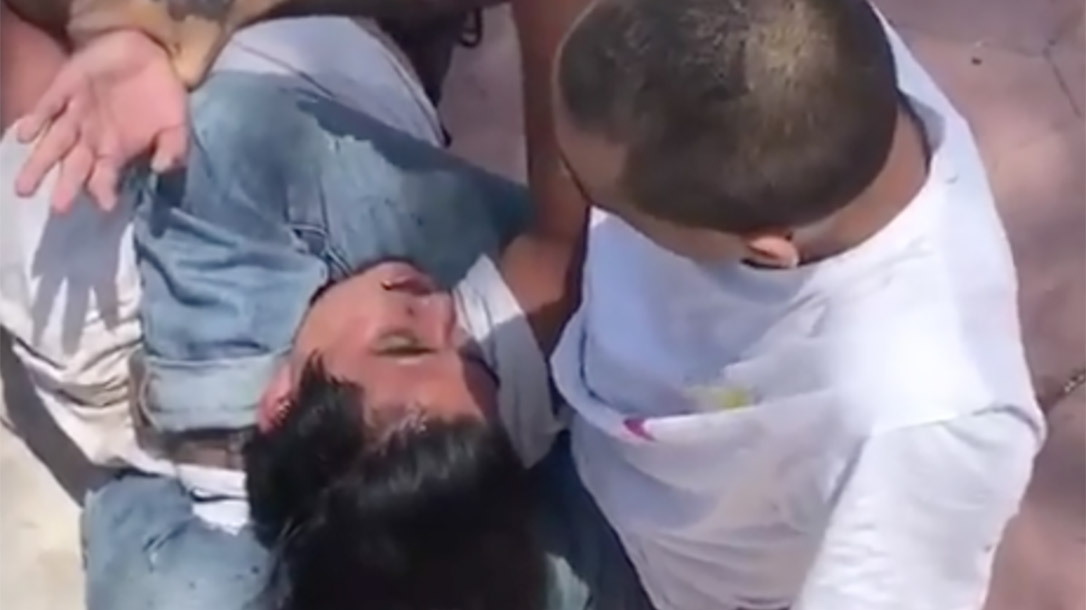 Michael Gonzalez told the Arizona Daily Star he was having lunch with his wife and daughter-in-law when waitresses came running out yelling that somebody had a gun. Gonzalez got up to see what was going on. That’s when he saw a man later identified as 20-year-old Jerry Evans Madril threatening employees and demanding money. He then witnessed Madril throw the cash register to the ground and start trying to open it.

A worker stealthily came up from behind and whacked Madril over the head with a chair, dropping him to the ground. The employees and Gonzalez leapt into action and subdued Madril. Gonzalez says he put pressure on Madril’s neck and told him to drop the weapon. When Madril did so, it was discovered that he was using a box cutter.

“He was outnumbered with the knife,” Manny Olguin, a worker at Mi Nidito, told CBS affiliate KOLD. “You could see it was a little box cutter. It wasn’t a big machete or nothing.”

Before he dropped the box cutter, Madril managed to slash Olguin and another employee.

Olguin had knife wounds on his leg. The other employee was slashed in the torso. Both were treated at an area hospital and are recovering.

Madril, meanwhile, had only minor injuries. According to KVOA, he was arrested and charged with one count of armed robbery, three counts of aggravated assault with a deadly weapon, and one count of burglary in the first-degree. He also had a felony warrant for violation of parole. Chief Manny Amado of the South Tucson Department of Public Safety said Madril was on probation for a felony DUI.

Madril’s rap sheet includes a 2012 prison stint for attempted arson and attempted assault. In 2016, he was sentenced to prison for criminal damage and attempted robbery. While in prison, he allegedly faced disciplinary action for drug possession, disruption and disobeying orders, KOLD reported.