Marion Hammer, the former president of the NRA and an influential lobbyist for the organization, has filed a lawsuit against five men, alleging a targeted campaign of “hate and vitriol” against her as a result of her Second Amendment lobbying efforts in the wake of the Parkland shooting.

According to the Tampa Bay Times, the lawsuit contends that four men—Lawrence “Lol” Sorensen; Christopher Risica; Howard Weiss; and Patrick Sullivan—harassed Hammer via phone calls; emails; and other means of communication. This allegedly caused emotional distress. It also sparked fears that the harassment could “escalate into actual violence.”

“There is a marked difference between speech and harassment, and there are clearly delineated bounds of human decency that no person can cross by using fear, intimidation, and threats of violence to lash out at and try to silence those with whom they disagree,” the lawsuit states. “The defendants have transcended mere criticism and employed threats, harassment, and personal abuse to try to humiliate and intimidate Hammer in a manner that is utterly intolerable in a civilized community.”

The lawsuits include graphic emails Hammer received, the Times reports. Each email allegedly includes threatening language and a litany of obscenities.

“I can’t wait till the day I flip on the news to see you mourning a gunshot victim,” Riscia allegedly wrote in an email. “You’re disgusting and exactly what’s wrong with people today. I seriously hope karma comes around for you soon.”

Weiss allegedly emailed the following to Hammer: “I pray every day that one of these ‘good’ people puts 100 bullets between your eyes so we can celebrate.”

The lawsuit says Hammer, 79, has been confronted and attacked verbally in grocery stores. In one incident, she was reportedly told, “I hope somebody blows your f*****g head off and your family too.”

“This photo documents the effect of an outdated military rifle on JFK. Today’s assault rifles are far more destructive,” the email reads.

An email allegedly sent by Sullivan begins with, “You should rot in hell you disgusting b***h!!!!” and gets worse from there.

In addition, during a public hearing in Tallahassee two weeks after Parkland, Rev. Joe Parramore—who is not named in the lawsuit—allegedly leaned over to Hammer and said, “The next check you write will be to pay for the funerals of your grandchildren.”

A second lawsuit was filed separately against a 66-year-old man named Brian Fitzgerald, alleging the same type of behavior.

The lawsuit describes the effect of this harassment on Hammer’s life.

“Hammer’s daily life has drastically altered because of the harassment she is enduring,” the suit states. “Whenever she is in public she worries that the people who have been harassing her will confront her and that a confrontation could turn violent. She has a very close relationship with her family, but now frequently avoids going out to dinner with them because she runs the risk of being recognized and attacked; potentially exposing her family and other members of the public to physical violence directed toward her. She adjusted her schedule and the places she eats with her family so that they are not predictable. Her entire family group does not go anywhere together any more.

“Hammer has even avoided public hearings and appearances—thus restraining her own constitutional rights and interfering with her performance of her professional duties—over fears that the harassment and threats against her will escalate and expose bystanders to physical harm,” the suit adds.

Hammer is seeking over $2 million in damages for intentional infliction of emotional distress and “intrusion upon seclusion,” the Times reports.

Watch the video above to get an idea of the threats Hammer, now the director of the Unified Sportsmen of Florida, deals with on a daily basis. 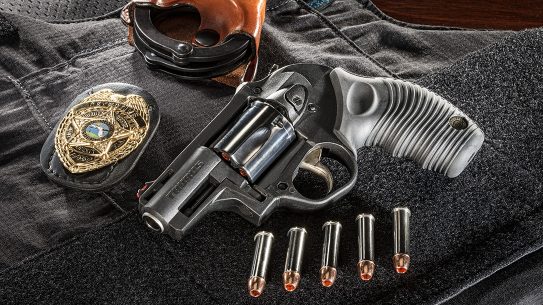