Normally when an armed citizen stops a bad guy, the citizen actually has the gun on his or her person, or in a vehicle. Not so in this story: the good guy in question had time to drive home, grab his gun, drive back to the scene of a convenience store robbery and hold the suspect at gunpoint until police arrived.

According to KOMU, Jim Hayes was buying a pack of cigarettes at the Eagle Stop in Boonville, Mo. when he saw a man “acting suspiciously” inside the store. He then observed the man walk up to the register, produce a weapon and demand money.

Hayes wanted to intervene, but he realized he’d left his handgun at home. That’s when he made the call to drive home and get his gun—he lives close to the store.

“There were some people in the store. I figured I got a minute or two to get home and get back and get my gun before he would be able to do anything.”

Upon returning to the store, Hayes was able to hold the suspect at gunpoint for police.

When the Cooper County Sheriff’s Office posted about the incident on its Facebook page, Hayes received universal praise for his actions.

Jennifer Surrat, whose daughter was working in the store at the time, said, “We are so glad that someone took the time to pay attention and decided to return and help our daughter out.. she was very scared. So thank you once again to the citizen and the BPD for their help getting this taken care of quickly.”

“And this is why gun laws should not be banned! Who knows what could have happened if he had not intervened!! Thank God everyone is ok!!” another user commented.

“Thank you to the armed citizen for being observant and to the Cooper County Sheriff’s Department,” another user said.

“I guess anybody in my position would have done the same thing. I didn’t do anything special,” he said. “I’m just glad I could be there to help them out and that nobody got hurt.”

Carter has been charged with first-degree robbery, armed criminal action, unlawful use of a weapon—exhibiting, and receiving stolen property. 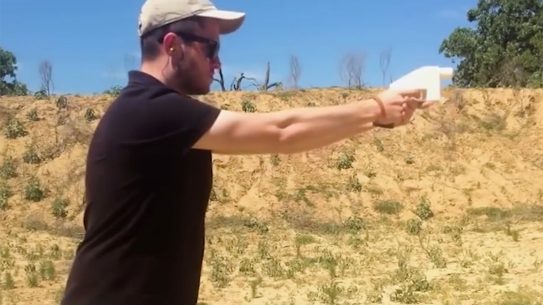 The DOJ has settled with Cody Wilson and Defense Distributed, allowing files for 3D-printed...