A son shot and killed a home invader while his mother was on the phone with a 911 dispatcher. Audio of the 911 call, with the fatal shots being fired in the background, can be heard in the video clip above.

Fox 8 Cleveland says the 56-year-old homeowner’s son was visiting her in Akron when the doorbell rang. Her son moved to the back door, only to find a man neither he nor his mother knew trying to force his way into the home. At some point during the confrontation, the son armed himself with a handgun and the mother called 911.

“What’s going on there?” the dispatcher asks. A gunshot rings out immediately after that.

“Somebody is trying to break into my house,” the panicked mother replies, adding, “My son had to shoot the guy. He’s breaking in the house.”

Akron Police Lt. Rick Edwards says the son held the door closed and ordered the intruder to leave; the man refused. At some point, the suspect managed to open the door again, prompting the son to fire another round.

“He broke in the house and my son had to push him out the door and he still wouldn’t leave,” the mother tells the dispatcher.

“Get the f*** out of here!” the son yells after firing another round.

The suspect, identified as 41-year-old Daniel Jones, died at the scene.

Jones has no arrest record and is the son of a pastor at a nearby church, Fox 8 reported. He’s also a father. In addition, his property is just behind the home he was trying break into.

Ohio has a Castle Doctrine law, allowing homeowners and guests inside the home to use lethal force against an intruder if they are in fear for their lives.

Police continue to investigate the shooting; no charges have been filed against the son for killing Jones. Based on the aforementioned Castle Doctrine law, as well as the 911 call, it doesn’t appear likely that he’ll be charged. 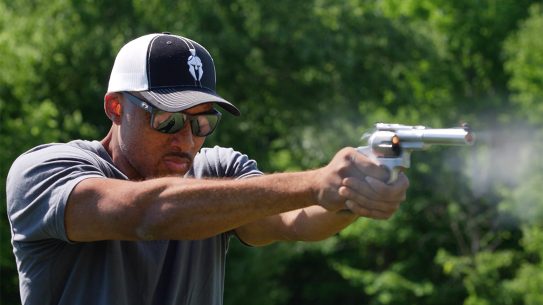 The 10mm Ruger Super Redhawk revolver is a beast, so naturally we pushed it...