Portland State University police shot and killed a concealed carrier who dropped his gun while attempting to break up a fight last Friday night. 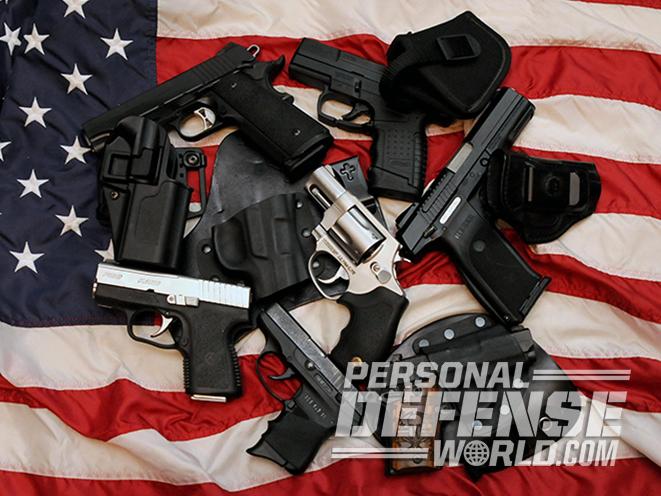 CBS is reporting that the incident occurred outside a sports bar near campus when 45-year-old Jason Washington stepped in the middle of a scuffle between two groups of people. Keyaira Smith, a witness who filmed the encounter on her smart phone, told Oregon Public Broadcasting that Washington was “trying to be a good samaritan” and break up the fight, but he tripped, causing his firearm to fall to the ground.

“The gun slipped out of the holster when he had fallen, and I think he may have tried to retrieve it,” Smith said. “Then [police] said ‘gun.'”

“There was absolutely no hesitation at all,” Smith said. “[The officer] went straight for his gun.”

Smith added that Washington’s back was turned when he was shot.

Donald Dietz, a witness who works at the Cheerful Tortoise bar where the shooting took place, told The Oregonian that Portland State University police shot Washington after he ignored multiple commands not to reach for his gun.

“They warned him multiple times not to reach for it, but he did,” Dietz said. “I don’t want the message out there that the cops were trigger-happy.”

Washington was a Navy veteran who worked for the Post Office. The Multnomah County Sheriff’s Office has confirmed that Washington had a valid concealed carry permit.

The officers involved in the shooting have been identified as Officer Shawn McKenzie, who joined PSU’s Campus Public Safety Office since 2002, and Officer James Dewey, who joined in 2014. Both men have been placed on administrative leave pending the results of an investigation.

On Sunday, protestors gathered at Portland State University calling for the disarming of campus police, who did not become armed until 2015. The decision to arm campus police was a controversial one.

“His wife lost a husband, his three daughters lost a father, granddaughter lost a grandfather. Friends lost friends. I graduated from Portland State University and I am disgusted,” said Andre Washignton, Jason’s brother.

“All witness accounts say that he was trying to deescalate the fight and that his gun fell out and it was an accident. There’s nothing to indicate he did anything wrong,” said Olivia Pace, a member of the Portland State Student Union. “This is the exact reason why we didn’t want campus security armed. When we found out that it had resulted in fatal consequences we were so disgusted and sad.”

Portland State University said in a statement that the incident is being investigated. In addition, it said the school’s policies and procedures are being evaluated. The school also notes that this is the first officer-involved shooting at Portland State.