Ruger’s LCR series revolvers have earned a solid reputation for reliability, and the 3-inch-barreled LCRx (shown with a set of Crimson Trace Lasergrips) kicks things up another notch.

Ruger’s LCRx revolver is one of the lightest and handiest personal-protection wheelguns on today’s market. In addition, there are very few personal-defense tasks this lightweight, 3-inch-barreled wheelgun can’t handle. That’s saying a lot. But this revolver lives up to its promise by offering an excellent combination of portability, handling characteristics and power. 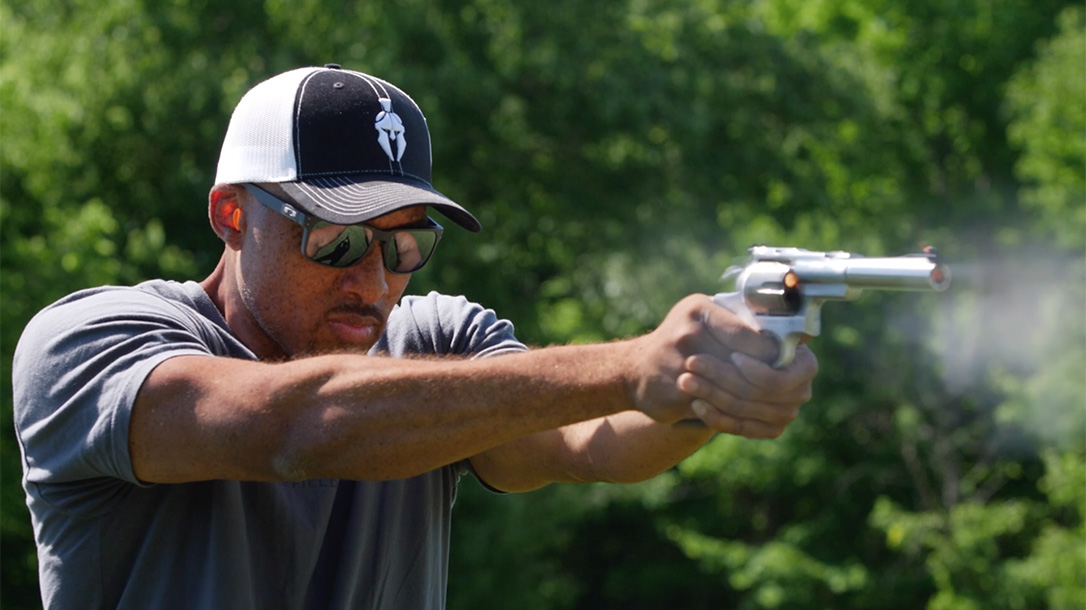 Revolvers with 3-inch barrels have been around for a long time, but they haven’t been very popular. Gun buyers tend to purchase firearms that military and police forces have carried, and back when soldiers and law enforcement officers primarily carried revolvers, they were issued guns with 2- and 4-inch barrels.

On the other hand, civilian needs are often different than those of public servants. The average man or woman isn’t going to make arrests, work undercover or fight in the trenches. John and Jane Doe are more concerned with protecting their home and being able to defend themselves on the street. For these tasks, a 3-inch barrel often makes the best sense for the person who chooses to pack a revolver.

That’s because a 3-inch barrel is short enough to be quite handy but long enough to generate considerable power and have enough of a sight radius for good shot placement. When it comes to handling, 3-inch-barreled revolvers are easily concealed in a handgun safe, an inside-the-waistband (IWB) holster, a purse or an overcoat pocket. They also carry very well in a belt holster while riding horses, hunting and hiking. In addition, their 3-inch barrels point nearly as quickly as a snub-nose revolver’s, yet their longer sight radius makes them a lot easier to aim with than 2-inch-barreled guns. When it comes to ballistics, 3-inch barrels typically generate almost as much muzzle velocity and muzzle energy as 4-inch barrels of the same caliber. Therefore, a 3-inch-barreled revolver is a very good choice for shooters who simply want one wheelgun for personal and home defense rather than several for different purposes.

The 3-inch-barreled LCRx in .38 Special +P (officially Model 5431) is part of Ruger’s LCR lineup of revolvers with polymer grip frames. The revolver sent to me for testing is similar in many ways to other .38 Specials LCRs I’ve shot in the past. It has a monolithic frame made of hardcoat anodized 7000-series aluminum; a deeply fluted, five-shot, stainless steel cylinder finished in black Diamondcoat; and Ruger’s patented LCR friction-reducing cam, which gives the gun a smooth, non-stacking trigger pull. The “x” in LCRx means this handgun has a double-action/single-action (DA/SA) trigger. The series was introduced in 2014, and it impressed me in both SA and DA modes.

Even though it is similar to other .38 Special LCRs, the 3-inch-barreled version has a few other interesting features in addition to its barrel length. For example, it has an adjustable rear sight and a larger Hogue Tamer Monogrip. This new revolver’s bigger grip, adjustable sights, longer sight radius and SA capability combine to make it easy to fire accurately at 15 yards. The adjustable sight also allows the Ruger LCRx to be zeroed with different loads.

A few revolvers don’t need adjustable sights because they seem to shoot bullets of different weights to the same point of aim. Unfortunately, however, most don’t, and adjusting the sights so that your chosen defense load shoots to the point of aim is much better for making a precise shot than using a 6 o’clock hold or “Kentucky windage.”

Lastly, this Ruger LCRx is easy to conceal and carry. It’s just 7.5 inches long, 5.8 inches tall and 1.28 inches wide. It weighs just 15.7 ounces unloaded, which makes it light enough to carry all day. Another advantage is that the .38 Special has been popular for over 100 years, so shooters have a broad variety of both .38 Special and .38 Special +P loads to choose from.

The 3-inch-barreled LCRx doesn’t just have a lot of good features—its quality was evident the moment I opened its box at my local gun shop, the Florida Gun Exchange. Externally, the gun was very clean, with no rough edges, scratches or tool marks. The color of its steel, aluminum and polymer components matched very closely, giving the gun a matte black look that was quite attractive. This revolver’s lines are nicely contoured, and its prominent white, ramped front sight was easy to center on targets when aiming. Lastly, the barrel was set squarely in the barrel shroud, and the crown was evenly recessed to protect the 1-in-18.75-inch-twist rifling.

A bench examination of the LCRx’s tightness, timing, trigger pull and cylinder gap clearly showed it is well made. The gun locked up tightly with absolutely no back-and-forth or side-to-side play in the cylinder. The timing was perfect, with the cylinder locking in place about 0.375 inches before the hammer locked on the sear’s full-cock notch. The cylinder gap was 0.006 inches for each of the five chambers, indicating that the cylinder was properly indexed in the frame.

The trigger pull in DA mode was 10.5 pounds, with a small hesitation just before the sear broke and about a quarter-inch of overtravel. The SA pull registered 6.5 pounds, which is a bit heavy. Cocking effort was also heavy. Despite this, the sear broke smoothly and the trigger had the same quarter-inch of overtravel when fired in SA mode. The ejector rod is short, but it extracted cases easily. Fully ejecting the cases required using Massad Ayoob’s “Stressfire” technique in which the ejector is firmly depressed with the palm of the strong hand while the revolver is held in the other one. When reloading, HKS #36A speedloaders worked well in the LCRx.

I fired the LCRx when it was first released, and I found the grips comfortable. Afterward, I sought out Crimson Trace’s new green laser for the LCRx. I then mounted a set of these Lasergrips on the test gun and went to the Flagler Gun & Archery Club to sight the gun and laser in at 15 yards. The white front sight showed up well, and the green laser was quite visible. I then used the LCRx to shoot the “Army L” portion of the club’s weekly informal Bullseye match. My scores were quite good considering that the LCRx is not a target pistol. 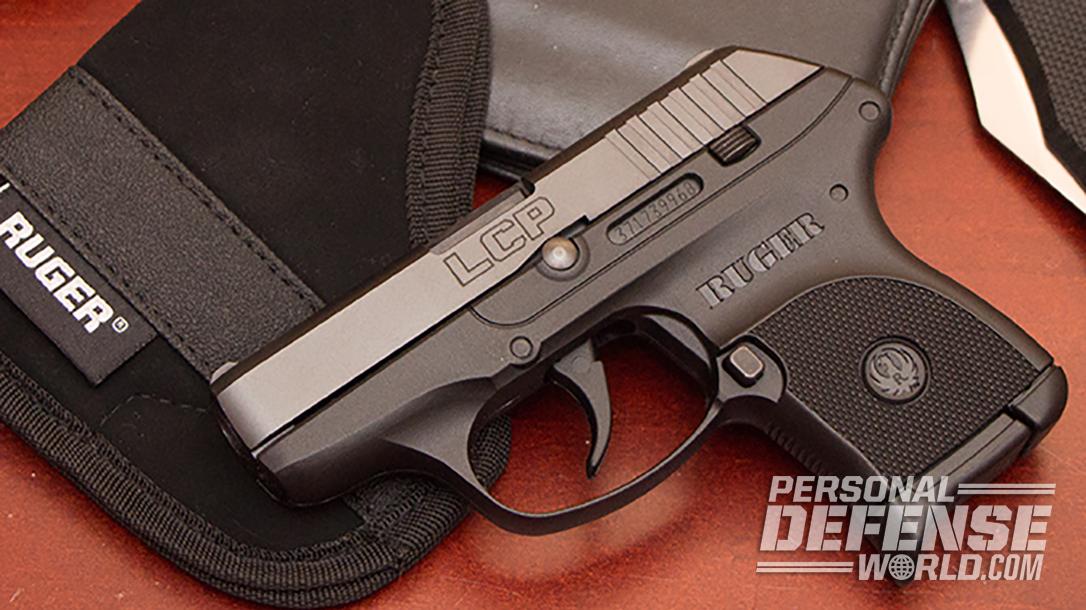 I scored a 97-4X on the slow-fire stage, shooting in SA mode from an isosceles stance. After that, I fired identical scores of 93-2X for both timed and rapid-fire stages shooting in DA using the same two-hand hold. Not bad for a small revolver designed for concealed carry.

To test the revolver’s accuracy and velocity, I used ammo from Black Hills, CorBon, Federal, Hornady, Remington and Winchester. All of the test loads functioned perfectly, and the LCRx’s accuracy was quite good from the bench at 15 yards. I kept the revolver rested on an MTM Front Sight rifle rest using a sandbag to provide a solid platform under my hands. The 125-grain Black Hills XTP load created the tightest five-shot group, which measured just 1.53 inches. All of the loads shot well, and none turned in a best group that was wider than 3 inches.

Given the 15.7-ounce unloaded weight of the LCRx, I expected that the recoil would take its toll after firing 120 rounds from the bench. However, the recoil wasn’t that bad. Even the hot +P load from CorBon produced only 6.29 foot-pounds of recoil. The factory grips and the Crimson Trace Lasergrips both did a good job of managing recoil.

This particular Ruger LCRx is very well made and delivers all of the performance I’ve come to expect from 3-inch-barreled revolvers. Its suggested retail price of $579 is quite reasonable in today’s market; I expect that it will be quite popular for both home defense and carry in the outdoors.