by Teresa Mastison
in Lifestyle, Shooting 101
0

All handguns require ammunition to be effective, including this Springfield XD.

Congratulations. You have your first firearm and are ready to enter the gun world. But hold on. If you want to be taken seriously, you should learn some firearms vocabulary, know what you’re talking about and simply be correct. In fact, using incorrect terminology reduces your credibility and tells others you don’t know what you’re talking about, which can lead to uncomfortable and potentially irate conversations. 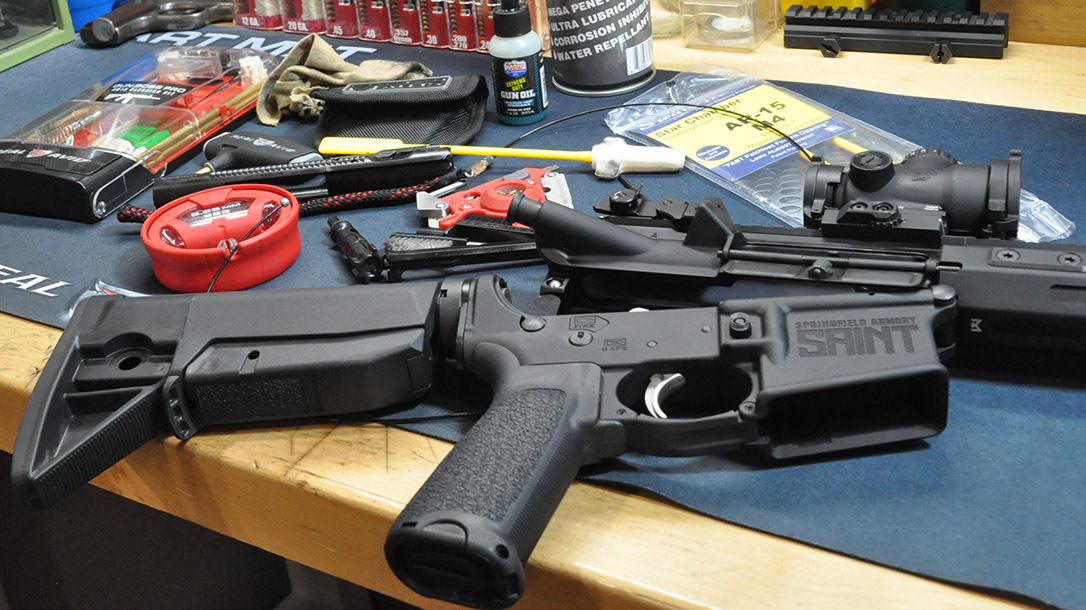 However, learning the lingo will make your entrance into the firearms world easier and more enjoyable.

Let’s start with a biggie in firearm vocabulary: magazine versus clip. Magazines are often incorrectly called clips. There’s a difference—a big difference—and they are not interchangeable. So, let’s set the record straight. A magazine is a spring-loaded device that holds multiple rounds and is inserted into a firearm to feed it ammunition. However, a clip is a device that holds multiple rounds together with a metal strip until they are loaded into a firearm. The clip makes loading a magazine faster and easier. Basically, a clip feeds a magazine, and a magazine feeds the firearm. If you’re interested in why these terms are often misused, research the M1 Garand of World War II and the history about such firearms.

Next on the list of misused terminology are bullet, round, cartridge and ammunition. The words round and cartridge are interchangeable. The plural is ammunition, or ammo for short. However, the word bullet means something different and cannot properly be used in placed of cartridge or round. Learning the difference between these terms will help you sound like a gun owner who knows something.

A round is the complete unit that goes into a weapon. Encased inside the round are the primer, powder and bullet. When the firing pin strikes primer, it ignites the powder, which then propels the bullet. The bullet hits the target. To recap, ammo goes into the gun, and the bullet is what comes out of the gun.

Bullet size will become a topic of interest now that you own a firearm, so let’s get it right.

It’s always wise to know what you’re shooting, especially since this will avoid potentially embarrassing situations. A firearm designed to be fired with your hands is called a handgun, or pistol. You can shoot a handgun with one or two hands, and because of its small size, you can also shoot it in various positions and carry it on your body.

A rifle, on the other hand, is much larger and longer, and was designed to be fired from the shoulder. Then there’s the carbine, which often is used interchangeably with rifle. This is a mistake. A rifle is a full-sized long gun, while a carbine is a short rifle. So, a carbine is a rifle, but a rifle is not a carbine. Nitpicky, I know, but it’s best to know the difference.

Let’s wrap this up with a few more items. Some weapons are select-fire in design, which means the shooter can select between two or more firing modes, typically semi-automatic and full-auto. However, most weapons are semi-autos, which means you fire one round per trigger pull. To fire another round, you must press the trigger again.

On the other hand, full-auto weapons will continue to fire until you release the trigger or the gun runs out of ammo.

Finally, I can’t talk gun lingo without mentioning what the “AR” in AR-15 really means. In the firearms community, AR does not stand for “assault rifle.” It actually stands for “Armalite Rifle.” Armalite is the company that created the innovative AR-15 and used “AR” in the model name. So, with that tidbit of knowledge, you can dazzle and educate your friends. Actually, the assault rifle issue is an intriguing topic, and understanding it will increase your overall knowledge of this world.

Of course, this is only the beginning of the gun lingo you’re about to experience. Remember, you don’t know what you don’t know. When in doubt, ask questions and do your research until your questions are answered. Search out professionals for training, and choose your reading from a variety of sources. Welcome to the range.